Four people believed to be key organisers of anti-lockdown protests in Victoria were arrested or fined at a rally on Thursday night, with police expressing frustration about a number of “hardcore” repeat offenders.

Hundreds of protesters stormed the Melbourne CBD on Thursday evening calling for the resignation of Premier Daniel Andrews and for “freedom” just hours after the snap lockdown was announced. 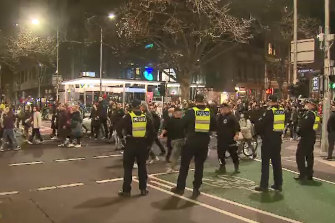 Hundreds of people protested lockdown in the CBD on Thursday evening.Credit:NINE NEWS

They gathered in Flinders Street station at 7pm and marched around the city, mostly mask-less and some armed with flares. Police used pepper spray to quell aggravated protesters who were chanting “no lockdown”.

Fifteen arrests were made: two people for breaching bail and stating false names, nine who were arrested before their identity could be confirmed to issue fines, and four people who are also expected to be charged on summons in relation to breaching their bail, activating a flare and hindering police.

Sixteen fines were handed out for breaching the Chief Health Officer’s directions.

Victoria Police North West Metro Assistant Commissioner Luke Cornelius said four of the people who were arrested on Thursday night were organisers of a series of protests in the city over the past 18 months.

“Those offenders will be assessed for appropriate charges relating to their deliberate organising of these protests. We are very keen to bring every accountability to bear on those individuals to stop them generating and instigating those protests,” Mr Cornelius said.

He described the protest as “volatile” and said it was a similar mix of protesters to those who attended the last rally.

“I want to be clear about this – yes, of course, there were concerned mums and dads, business owners, who are very concerned about how the lockdown is impacting their lives, how lockdowns impact their businesses, but there is absolutely a hardcore element of people who see this as an opportunity to pick a fight with police,” he said.

“Our very particular beef is with this hardcore element of violent criminals who kick a police officer while he is down … who attack members of the mounted branch behind their backs, who engage in regular acts of violence against police who are trying to keep the community safe.” 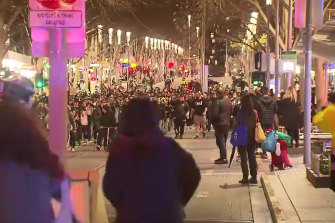 He also said he believed the protest organisers were “wolves in sheep’s clothing”.

“There are people who are dressing themselves as advocates for mums and dads and business owners who are really doing it hard. And I’d say the same thing that I said pretty much just on 12 months ago, and that is there are absolutely individuals out there who are looking to leverage the situation to pursue their own particular strange notions. And I just urge everyone to see these behaviours for what they are and make the safe and sensible choice.”

Asked whether police needed stronger powers to be able to deal with protest organisers and repeat offenders, he said he was “not an advocate for us becoming a police state”.

“If we go over the tops in terms of enforcement, we wind up giving some of those people the very thing they are looking for, which is a police state and they say, ‘There, you see, we told you so, the government and police are against you’. I’m here to say the police stand with the vast majority of Victorians. We stand here to support you,” Mr Cornelius said.

He said they were not anticipating any further protests on the weekend, but were ready to act if any were organised last minute.

Three particular incidents from Thursday night are being investigated.

The first involved the assault of an officer outside Melbourne East station, who was pushed by protesters and kicked while on the ground. He suffered minor cuts and abrasions. Capsicum spray was used so officers could reach the member who was assaulted and ensure he was safe.

Police are also investigating the release of a flare at the protest and criminal damage to a police vehicle that lost both side mirrors. Images will be released later on Friday to assist police in identifying those involved.

The state recorded six new cases on Friday, the first day of the state’s sixth lockdown. Two of these cases had been revealed on Thursday afternoon.