A HOMEOWNER has been left freaked out after discovering that her house key hides a chilling secret, sparking fears that she's got "bodies under her home."

The unnamed resident from Montana, USA, took to Reddit, where shared a picture of the eerie key in question. 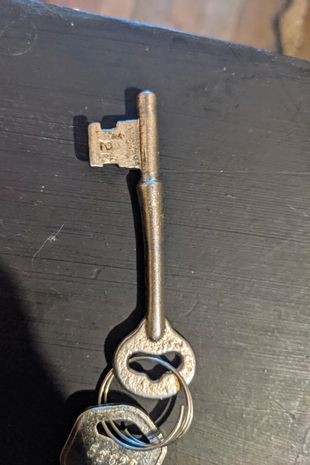 The innocuous old key harbours a disturbing secret, a mum revealed on social media, who has lived in her 1937 house for seven years.

She claims the key in the photo apparently still unlocks every room in the house -but "the bedrooms only lock/unlock from the outside".

It’s difficult to think of a good reason as to why anyone would want such an impractical and potentially very dangerous design quirk, and commenters’ imaginations have naturally run wild.

Suspecting that the previous owners could well have been hiding sinister deeds, one unnerved Redditor warned: "Dude, you’ve got bodies under your house".

The woman didn’t disagree with this morbid assessment, remarking that it "would not surprise me" given some of the "creepy things" they’ve found about the house.

Elaborating further, they wrote: “My son dug a big hole in the yard and found a bunch of weird bottles this summer. I did some research on the labels.

"One of them was some sort of creosote that was used in the early 1900s as a cure for whooping cough.

The poster, who is keen to move but currently unable to, also revealed that they had recently "found a very sharp samurai knife in a high up cupboard" they "never use", which they claim "definitely does not belong to me".

Many commenters have attempted to give explanations as to why the key works in this odd way, from "old time parental control" to a means of hosting travellers passing through town. However, as noted by one person, by 1937 this would have been considered an unusual security measure.

Whatever the explanation may be, I know that I’d personally be staying far, far away from the basement.