‘You don’t think you owe me that?!’ Brazen woman tries to get her date – who showed up 1.5 hours late – to buy food for her kids in viral video

A man who showed up late to his date with a woman was in for a surprise when she tried to punish him by making him pay for takeout meals for her kids.

The video, shared to Twitter by Raphousetv, documents the hotly debated situation in which the man attempts to stop the woman as she orders meals for her children.

The internet was divided by the video with many defending the mother, while others say while it was rude of him to show up late, it’s not his responsibility to buy them food.

‘So you don’t think you owe me after having me wait an hour and a half?’ the woman asks the man in the video. 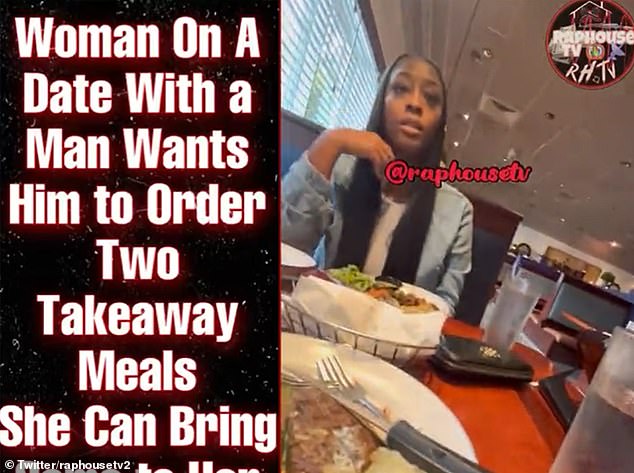 The video has amassed more than 6.4 million views on Twitter

The video has amassed more than 6.4 million views on the social media app since being posted in December.

It has also sparked a huge debate with more than 18,000 people weighing in.

The controversial video begins with the couple discussing the food the woman is ordering to go after they had finished their own meals.

‘You already had me waiting an hour and a half, so it’s for my kids,’ the woman says as he asks who the food she is ordering is for. ‘Yeah, you owe me that.’

‘Aren’t they with their daddy?’ the man asks in response.

Caught in the middle, the server taking their order laughs out loud at the man’s response. As the waitress comes back, the woman on the date continues to order as the man contradicts her, telling her to bring the check instead.

Some have taken the woman’s side, saying it was the least he could do after making her wait

‘Bring the check, I’m paying for my meal and your meal. I’m not paying for your kids’ meal,’ he says.

‘And my kids’ meal, yes you are,’ she responds pointedly.

‘So you don’t think you owe me after having me wait an hour and a half?’ she asks.

Should he pay for her kids’ meals?

Should he pay for her kids’ meals?

The man agrees that he does owe her, saying he will ‘take her out’ but again refuses to pay for the additional meals.

The waitress, whose name is Kiara, dealing with the commotion went into the back after the woman told her to put in the order for the food a third time.

‘I’m not paying for all of that,’ the man says as his date orders a steak with potatoes for one of her children, an eight-year-old son.

She also attempts to order chicken tenders for her five-year-old.

‘You’re gonna get her fired up in here,’ the man says regarding the food he reuses to pay for.

As the debate continues at the table, the man gets up and goes into the kitchen of the restaurant and yells out ‘don’t put that order in.’

A woman then yells at him, telling him to exit the kitchen and that his server will take care of it. 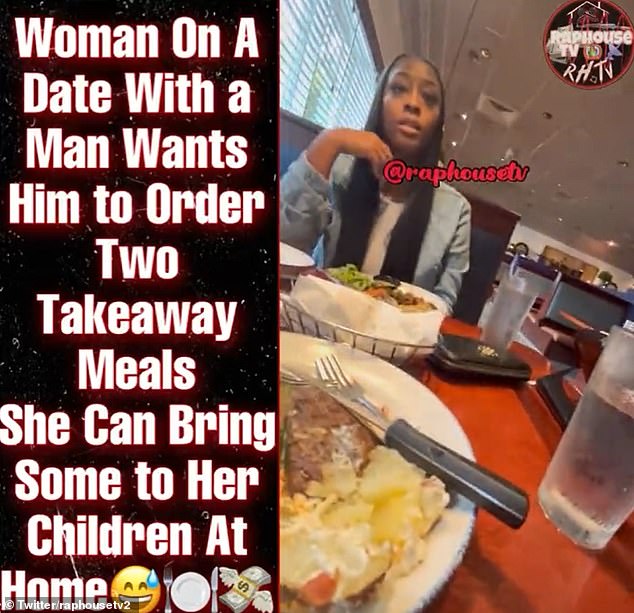 The man and woman debate, even getting the waitress involved at times 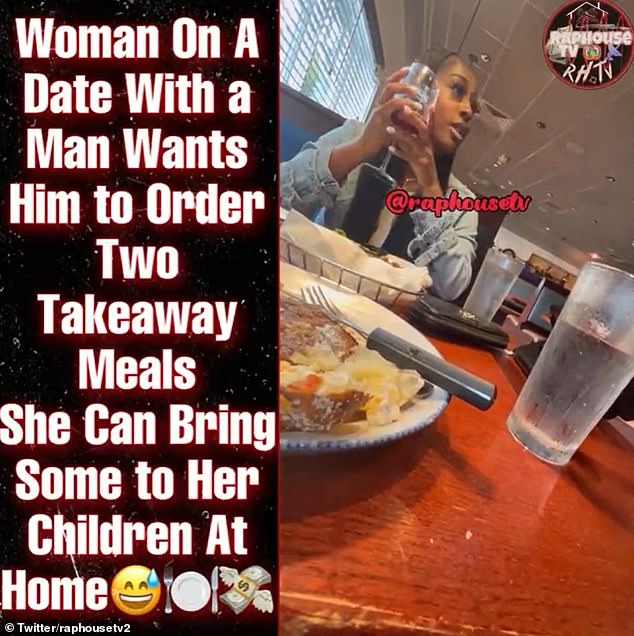 On his way back to the table, he tells other restaurant patrons what the woman is trying to do, saying: ‘She’s trying to put a bill on me and those aren’t my kids.’

‘I’m late to the date, she’s trying to make me get some for her and her kids,’ the man continues.

Immediately, one restaurant goer responds: ‘What’s wrong with that?’

The man responds, telling the restaurant that it’s his first date and he has never met the children to which another person responds:’ You were late.

The video ends with the two back at the table and the man asking for a box to go.

It’s unclear if he paid for the meals or if there will be a second date. 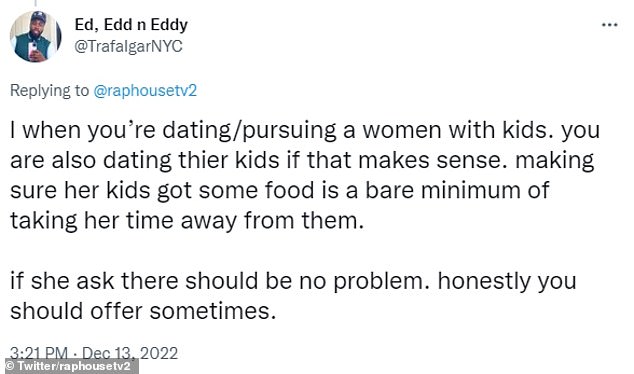 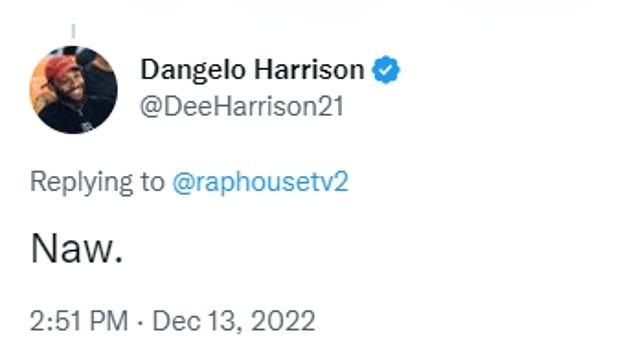 The video prompted heated responses from people who see his perspective and hers.

‘Your kids deserve better. He’s lucky you stayed because it sure wouldn’t have been me,’ said one woman, defending the mom in the video.

One verified Twitter user simply responded ‘naw’ to the woman attempting to get the man to pay.

‘l when you’re dating/pursuing a women with kids. you are also dating their kids if that makes sense. making sure her kids got some food is a bare minimum of taking her time away from them. if she ask there should be no problem. honestly you should offer sometimes,’ said one person.

‘You just left yo kids at home hungry to go out ONNA date ??? Lmaooo,’ wrote another.

Some agreed that the man should have paid, but disagreed on how the situation went down.

‘REAL MEN wouldn’t have a problem with this. It’s protect and shelter woman and children always,’ wrote one woman.

‘Yall right, real men wouldn’t have a problem with it but what y’all not understanding is a real woman wouldn’t even ask in the first place lol,’ said one person.