Kelly Ripa has shared several unheard of and often hilarious stories in her new book, Live Wire, although one of them particularly stands out.

The TV star detailed how she first found out in 2001 that she was pregnant with her third child, Joaquin, and the effect it had on her husband Mark Consuelos.

At the time, Kelly was caring for her older son Michael, now 25, and daughter Lola, who was still just an infant at the time, while Mark was away shooting in Australia.

She was finishing up her contract on All My Children while simultaneously working on Live!, even revealing how she gave up a much more lucrative offer to stay on the soap.

“It was as if after eleven years, the network found its wallet! Funny how that works, isn’t it?” she said of the new deal, which she called her “green new deal.”

She then revealed that shortly before Lola’s first birthday, she was invited to host the Disney premiere of Lilo and Stitch in Los Angeles. 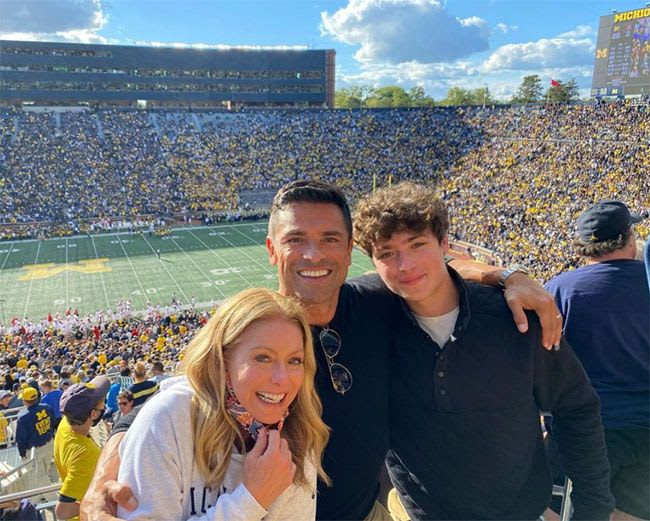 After highlighting the dazzling event, she continued that she still felt sick when she’d returned and finally decided to make a trip to the doctor.

Assuming it was the flu, she was shocked when the doctor asked her to provide a blood and urine sample, which revealed that she was pregnant.

“‘Mark is in Australia, so there’s actually no way. I mean there is no physical way. Because we never…’ Or did we?” she mused, then remembering a sudden trip to Montreal before he left.

She eventually tried getting in touch with her husband, who was deeply embedded in the Outback and was unreachable for two weeks.

Eventually, when he did call, she added that Mark was shouting into the phone, “obviously at a bar, and obviously drinky-drinky, happy-happy.”

Mark was away in Australia when she got the news

After hearing his story, she finally told him she was pregnant, and all she got was: “I love you baby. I had a feeling, didn’tcha?”

“No, I had no such feeling. I thought I had the flu, or an autoimmune condition, or mono,” she recalled, ending the story by hilariously recapping how Mark shouted out the news to the other patrons at the bar despite her telling him to keep mum about it.

It’s sleepy season: how to optimise your 9pm to 5am for glowing skin and healthy hair