Fifteen minutes after entering her hotel suite I find myself standing on one leg beside Trinny Woodall in the bathroom trying not to headbutt the basin as I massage my face. I have also fallen a little in love.

No safe word is required. I am willingly subjecting myself to a skincare regime with the product range Trinny London, launched in 2017 by the former fashion advice guru of television’s What Not To Wear . I am also praying that the one-legged part of the routine is to strengthen my core and not a Brit in-joke, like Monty Python or how to pronounce “Belvoir”. 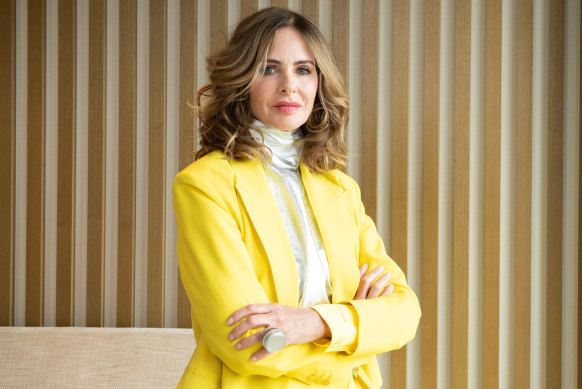 Beauty brand founder Trinny Woodall has made the transition from people’s television to bathrooms with her beauty brand Trinny London.Credit:Flavio Brancaleone

The love part may be a little one-sided but Australian fans of Woodall’s peptide moisturiser Bounce Back, hyaluronic acid serum Pump Up and Lip Love lipsticks can relate. Their love is so great that Australia is currently the second-largest market for Trinny London, prompting this press tour and last month’s introduction of local warehousing and pop-up kiosks in Sydney and Melbourne shopping centres.

While in Australia, Woodall is also exploring local manufacturing opportunities.

“When we started in 2017 many brands didn’t ship to Australia,” Woodall, 58, says at a rapid-fire speed that leaves you wondering what’s in those peptides? “I remember when J Crew was in America, and we couldn’t get it at home. As a customer, I felt diminished and excluded. I didn’t want that for Australia.”

“We decided to do shipping from day one. It cost quite a lot. We charged £13 pounds ($23), but it cost us £15 pounds. I knew straight away that we needed to localise distribution. Australia became 10 per cent of our market and then 12 per cent and then 16 per cent.”

Since launching local distribution and gaining new customers through pop-ups at Westfield Bondi Junction and Doncaster, which will remain open until March, Australians make up 26 per cent of the customer base of Trinny London. This has helped the business achieve more than £100 million ($179 million) in revenues since its launch.

“When I first came to Australia it was a lot more casual,” Woodall says. “From the Crocs to the jeggings. But there’s a huge shift about wanting to feel cooler, ageless and making an effort.”

Woodall sees nothing wrong with describing this as vanity, as long as you understand what the word means and don’t let yourself get confused by Carly Simon’s classic song You’re So Vain.

“The word vanity in the dictionary is not some narcissistic thing. It just means it’s about yourself. We’ve made that word something bad. You want people to understand the reasons why it’s nice to look after yourself. Part of giving the best to people around you is loving yourself a bit more.” 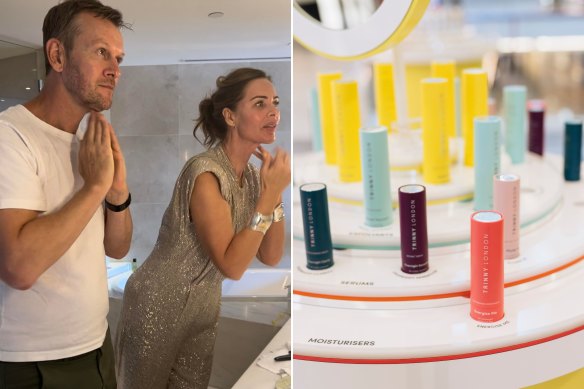 It would be easy to put Woodall in the narcissist camp as she meticulously prepares for each interview and photo opportunity, with her gifted make-up artist John Corcoran always a stage whisper away, but this is serious business. So serious that Woodall sold her home and the contents of her wardrobe to fund Trinny London in its initial stages. Judging by the swathes of sequins spilling from her luggage, the wardrobe has been replenished.

Instead of looking at herself in the mirror, Woodall is constantly sharing her experiences, advice and products on social media. She’s also listening.

There are also Facebook groups around the world, organised as the Trinny Tribe with 5,500 members in NSW, 5,300 members in Victoria and 2,300 in Queensland.

“They are our strongest advocates and our harshest critics. It keeps you thinking, ‘is this the right move?’”

My next move is trying to get feeling back in my leg, which has gone to sleep, but my skin is looking great, and I might even be falling in love with myself as well as Woodall.