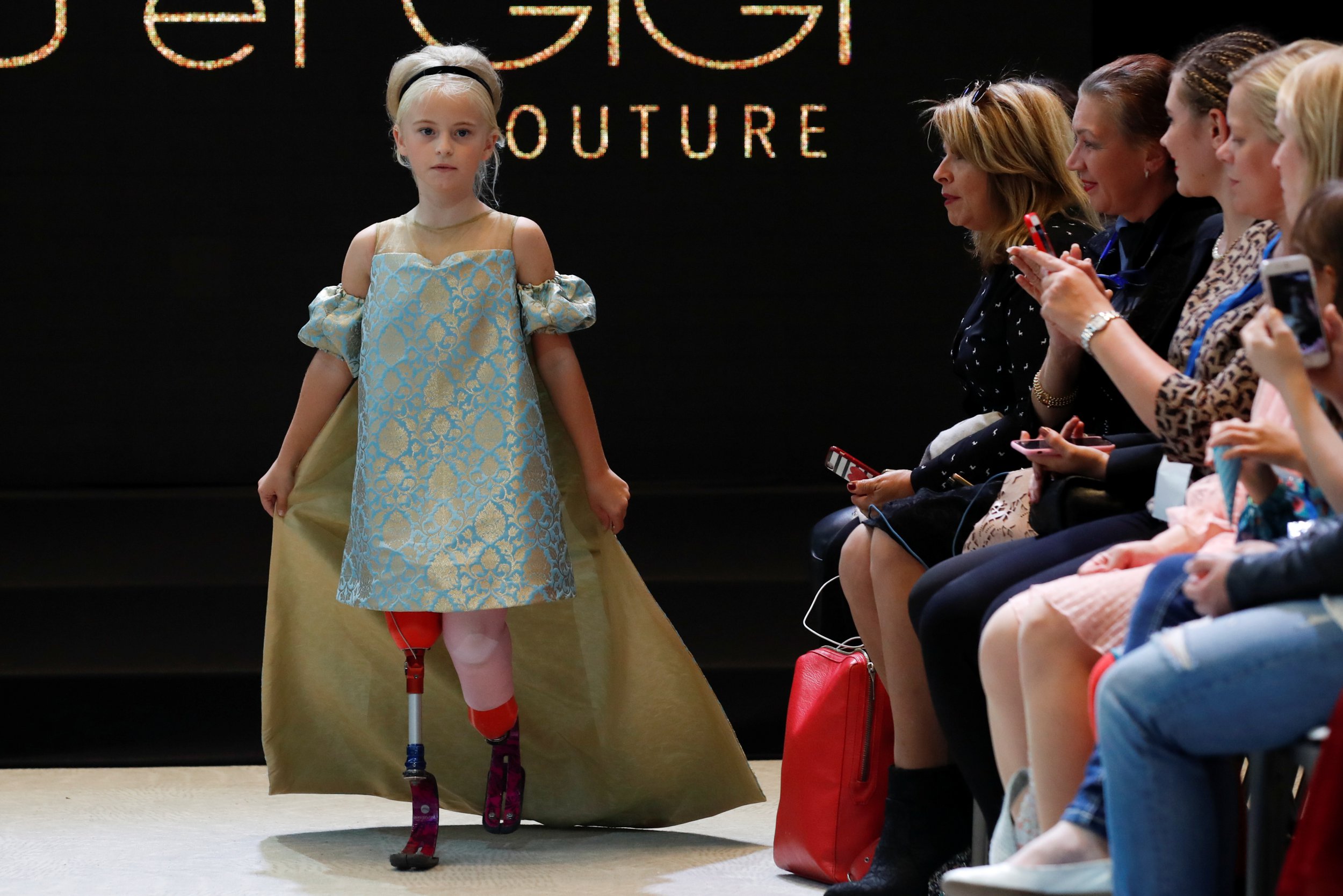 She is also a double amputee, having been born with fibular hemimelia – and as a result having her legs amputated as a baby.

Daisy-May, from Birmingham, who has three sisters and a brother, was born with the birth defect, causing all or part of the fibular bone to be missing.

The condition was picked up while she was in the womb at her 20-week scan, and by 18 months old, both of her legs had been amputated.

However, her disability has not stopped her in the slightest, and she is also a talented gymnast and goes to the gym three times a week.

She also now has two sets of prosthetic legs – blades and basic ones – and started modelling when she was seven.

It’s been a whirlwind for Daisy-May, who has since taken the fashion world by storm, posing for brands such as Nike, River Island and Boden and been named as brand ambassador for French-inspired clothing line Lulu et Gigi.

It’s through this ambassadorship that Daisy-May walked for the Lulu et Gigi in shows spanning New York, London, and Paris.

Her father Alex Demetre said at the time to CNN: ‘She inspired me by showing me who she was.

‘She takes on life with a smile on her face and she does remarkable things. Whether it’s dancing, singing, she is a very special little girl.’

And he’s not just inspiring people through her modelling. She is now the ambassador for AmpCamp Kids, hosting a one-week camp in Tenerife for other children who’ve had limbs removed.

The programme will give six families a holiday at a private villa in Tenerife, where Daisy will share her story and inspire the children that that they can achieve anything they set their hearts on.

Alex said: ‘I’m incredibly proud of Daisy-May, she has done so well with her modelling and enjoyed many opportunities I never dreamed she would have.

‘I’m delighted she is our ambassador for AmpCamp Kids and that she will be able to help other children in a similar position to herself.

‘I really struggled after Daisy-May had her legs amputated, it was a very dark time for me and I nearly contemplated suicide.

‘As part of the week, I’ll also talk to the parents and show them that it is difficult but their children can still thrive and live a full and happy life.’

Amputee Ben Lovell, who is also part of the camp and has fundraised £13,000 for the venture, said: ‘The end goal is to show these families that being an amputee isn’t the end of something it can be the beginning of something great.’

If anyone can show people about resilience, confidence, and how to thrive, it’s this amazing little girl.