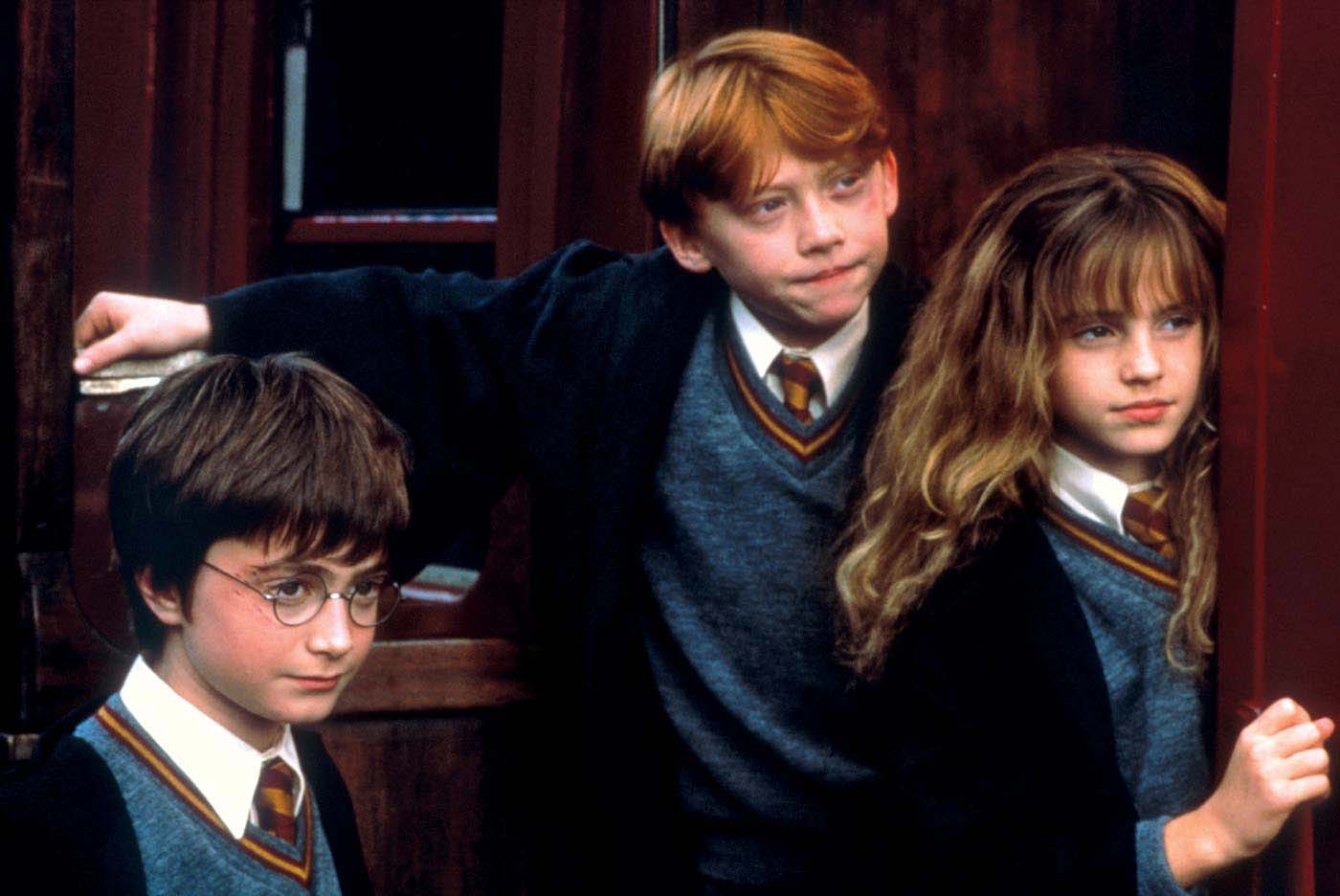 Shaping a generation. J.K. Rowling‘s books about a wizard named Harry Potter was just the beginning for what would go on to become a cultural phenomenon.

According to the author’s website, the idea for the series came to her in 1990 while she was sitting on a delayed train in London. It took five years for Rowling to figure out the entire journey — which she broke down on pieces of scrap paper.

Several years later, Rowling revisited her manuscript and sent it out to literary agents in her area. After publishing the first novel in 1997, the series received critical acclaim from kids and adults alike.

From there, the Harry Potter franchise was born and it wasn’t long before Warner Bros expanded the world on screen. The characters from the beloved book series were brought to life by Daniel Radcliffe, Emma Watson, Rupert Grint, Bonnie Wright, Tom Felton, Helena Bonham Carter, Ralph Fiennes, Gary Oldman and more.

Rowling, for her part, continued to grow the magical world with a spinoff prequel titled Fantastic Beasts and Where to Find Them. In the new film series, Eddie Redmayne plays the role of Newt Scamander on a quest to save the muggle and Wizarding World.

Radcliffe later reflected on the impact that the Harry Potter series has had on its readers.

“The time in most people’s lives when they discovered it meant that it has an incredibly important place in a lot of people’s childhoods, and they still feel very protective over it,” he explained during a 2016 documentary appearance. “One of my favorite fates that we could never have ever imagined for the Harry Potter films, but that I have been told by several friends, is that they are fantastic when people are hungover and feeling really crappy about themselves.”

The actor added: “They will just watch a few movies back to back and it just takes them to a place of warmth and comfort. That is so lovely to me. That is the real-world effect that a film can have on someone’s life. I think that is great.”

Scroll on for a guide on how to watch the Harry Potter movies in chronological order — or not:

The first film quickly introduces the audience to Harry Potter and his ordinary life on Privet Drive. With the help of Albus Dumbledore (played by Richard Harris and later Michael Gambon) and Professor Minerva McGonagall (played by Maggie Smith), the young boy discovers his true identity as a wizard.

Harry goes to Hogwarts School of Witchcraft and Wizardry where he discovers a secret world full of magic and hope. He starts to form friendships with Ron Weasley (Grint) and Hermione Granger (Watson) as the movie follows their adventures at school.

Viewers are also introduced to the series’ main antagonist Lord Voldemort (played by Fiennes) for the first time.

After a long summer away from Hogwarts, a house elf named Dobby (Toby Jones) appears to warn Harry that he shouldn’t return to school. After breaking out of the Dursley home, Harry spends the rest of the summer with Ron’s family, the Weasleys.

As the school year progresses, Ron’s sister, Ginny (Wright), goes missing, and the second movie’s plot comes to a head.

This movie delves much deeper into the darkness that surrounds the magical world, and Draco Malfoy (Felton) grows even more antagonistic toward Harry and his friends.

Alfonso Cuarón takes the director’s chair for the third installment of this magical franchise.

Harry Potter and the Prisoner of Azkaban contains more drama that unfolds at the Dursley home as Harry accidentally uses magic to inflate his Aunt Marge. He is subsequently captured by the Ministry of Magic for using magic outside of Hogwarts.

In Harry’s third year, another evil force is introduced: the dementors. These soul eaters are an obstacle Harry will face for years to come. Throughout the film, Harry slowly discovers secrets from his past that help shape his memory of his parents.

There is more talk of Voldemort in this movie as plot pieces begin falling into place, and the tension between Professor Snape (Alan Rickman) and Harry continues to grow.

Harry’s fourth year at Hogwarts is a fan favorite book and movie. It’s a turning point not only for our hero but the wizarding world at large.

It begins with the Weasleys inviting the Boy Who Lived to the Quidditch World Cup, which ends tragically as cultists of Voldemort — the Death Eaters — come to destroy the game.

When Harry, Ron, and Hermione return to school, they learn that the Triwizard Tournament is being hosted at Hogwarts this year.

Two other magic schools come to join in the games, events and competitions between the school’s best students. Harry is too young to participate, so everyone is shocked when the titular Goblet of Fire chooses him as a tournament contestant. Harry is forced to participate and struggles through each contest.

Most notably, Voldemort is seen alive and well for the first time since Harry Potter and the Sorcerer’s Stone.

When Harry is forced to use magic to drive off a couple of dementors to save his cousin Dudley (Harry Melling), he receives another summons from the Ministry of Magic.

Luckily, Harry once again narrowly escapes expulsion and returns to the school, only to find out that a new professor has arrived: the deeply unpleasant Dolores Umbridge (Imelda Staunton).

Harry matures this year more than any other, especially in direct contrast to Umbridge’s rise to power at Hogwarts. Audiences are also introduced to the secretive Order of the Phoenix, a group dedicated to the defeat of Voldemort.

Finally, Harry learns more about his fate: either he or Voldemort must die at the hand of the other.

Everything the ‘Harry Potter’ Cast Has Said About a Potential Reboot

The sixth year of Harry Potter’s schooling is amongst the most dramatic of the series. Harry is set on defeating Voldemort, no matter what it takes.

Dumbledore brings Harry with him on an excursion, and Harry learns that Voldemort never actually died. He hid his soul in Horcruxes to chase immortality.

Snape becomes the Defense Against the Dark Arts teacher, and Harry begins taking private lessons with Dumbledore to aid in his final battle with Voldemort.

A book owned by someone who called themselves “the Half-Blood Prince” comes into Harry’s possession. Much to Hermione’s dismay and everyone else’s confusion, Harry turns into a brilliant potion master thanks to the prince’s helpful hints.

Death Eaters infiltrate the school at Malfoy’s behest and things take a turn. There are casualties of significance, and Harry decides to leave the school for good to destroy all of Voldemort’s Horcruxes. Ron and Hermione, the faithful soon-to-be couple, follow him.

Harry is of age now and is finally able to practice magic outside of school.

The entire wizarding world is searching for him, Hermione and Ron. The trio suffers a difficult winter, and after an argument, Ron ditches the two of them before returning later to save their lives.

Harry hears a story that describes three magical items known as the Deathly Hallows that are said to make the wielder stronger than death itself. In Deathly Hallows Part 2, the group seeks these mythical tools to defeat Voldemort. Harry also realizes that he may need to sacrifice himself to defeat the Dark Lord.

There is a final battle at Hogwarts, in which Voldemort now has possession of the elder wand. Harry takes this chance to face Voldemort alone.

While chronologically, these movies take place before Harry Potter and the Philosopher’s Stone, if this is your first time watching through, watch them last.

David Yates, who directed the last four films, directs these as well, so they are at least worth one watch-through.

If you to know what happens at the end of each movie and the series at large, go read the books! They are available at every major bookstore and on Amazon.

If you really don’t have time for reading, it’s time for a movie marathon. Take a break from Marvel and Star Wars — these are worth every second. As of 2022, the movie franchise is available on HBO Max and Peacock.