A Guide To Exploring Art In Mexico City

Mexico City is considered one of the world’s alpha cities due to its international economic interconnectedness. With a population of nearly 22 million, it’s also the sixth-largest metropolitan area in the world and the most populous city in North America. To say the capital city has much to explore is an understatement. But while many are familiar with the cuisine of the locale that serves as the origin for what we deem Mexican food in the United States. And the Day of the Dead celebration which happens each year on October 31, thanks to popular Halloween costumes and the Academy Award-winning animated film Coco, what few might know is that Mexico City is also a global center for contemporary art. 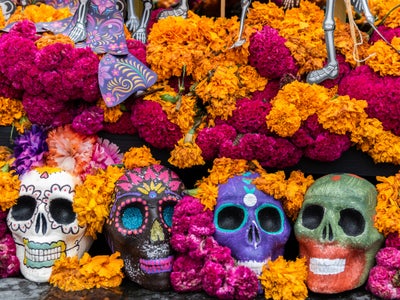 Each February, the city hosts Zona Maco, Latin America’s largest art fair, which boasts attendance numbers not far behind those of the popular Art Basel fair in Miami. And just a brief stay in Mexico City will make it clear why it is the chosen location for the annual exhibition. Between the architecture, sculptured landmarks, museums and galleries, the birthplace of famed artists such as Diego Rivera and Frida Kahlo is a living, breathing work of art year round.

I recently had the opportunity to explore Mexico City’s art scene for the first time and I put together this guide to the must-see works for your next visit. 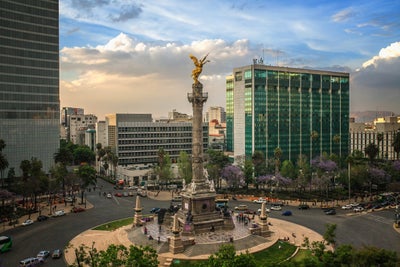 This landmark sits in the center of the roundabout of the busy Paseo de la Reforma in downtown Mexico City. The Angel of Independence was built in 1910 by architect Antonio Rivas Mercado and is a symbol of the country’s freedom from Spain. French-Italian sculptor Enrique Alciati crafted the bronze statue of Nike, the Greek goddess of Victory, which sits atop the main column and is covered with 24k gold. 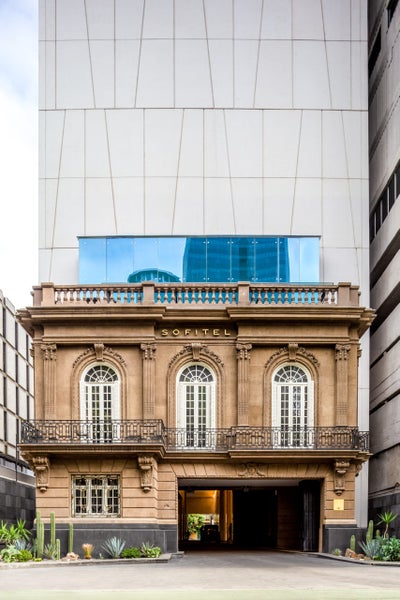 You can see this view of La Reforma and El Ángel every morning from your guest room at the Sofitel Hotel, which I highly recommend. There’s also a winding staircase that begins on the 14th floor lobby and was designed as a landing to gaze out at the marble monument. Though French in origin, the 5-star property also incorporates Mexican artistry into its location in the Reforma district, marrying unique touches with the staple offerings of the international hotel chain. (More on that below.) 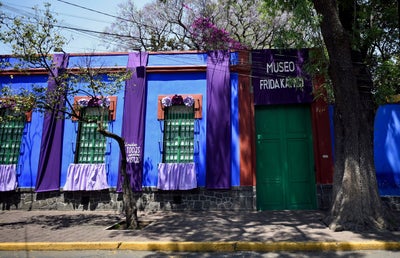 Frida Kahlo is arguably Mexico’s most famed painter, both in the art world and pop culture. Casa Azul is the home she was born in and once shared with her husband, fellow painter Diego Rivera, and now serves as a museum of her artwork and a memorial of her life. 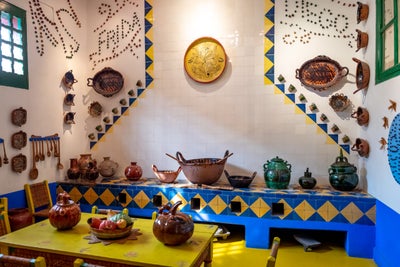 The rooms of the home which is located in Coyoacán, a borough now considered the historic center of Mexico City, take you back to Kahlo’s childhood when she battled polio through her late teen years when she was injured in a bus accident that left her in pain for the rest of her life. These events would serve as themes for the surrealists works she came to be known for, which included many self-portraits. I recommend a guided tour to learn more history of the framed art within Casa Azul’s walls and the lives of the man and woman that once lived there.

Another popular home in Mexico City is that of architect and engineer Luis Barragán. Considered “one of the most internationally transcendent works of contemporary architecture,” the home, built in 1948, is the only personal property in Latin America to be placed on UNESCO’s World Heritage List.

Located in the working-class neighborhood of Tacubaya, Casa Luis Barragán consists of two adjacent lots which made up both his home and workshop — each maintained as he kept them until his death in 1988. More architectural wonders of Barragán’s can be seen throughout Mexico City at Capilla de las Capuchinas Sacramentarias, Casa Gilardi, Casa Ortega, Casa Pedregal, and Cuadra San Cristóbal. 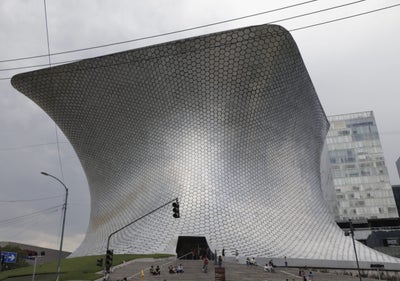 Soumaya catches your attention right from the outside with its unique aluminum structure designed by Fernando Romero. Located in Plaza Carso in the Nuevo Polanco district, Museo Soumaya is the most visited art museum in Mexico and houses more than 66,000 pieces of art dating back as far as the 15th century. 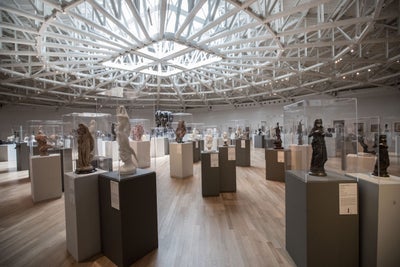 Though European works represent a significant portion of Soumaya’s collection, 19th and 20th century Mexican art, Pre-Hispanic Mesoamerican sculptures, and the world’s largest collection of pre-Hispanic and colonial era coins fill the rooms of the six-story museum. Entrance is free and doors are open from 10:30 am- 6:30 pm daily. Step across the street after your visit to explore Museo Jumex which has one of the most extensive collections of contemporary Latin American art in the world. 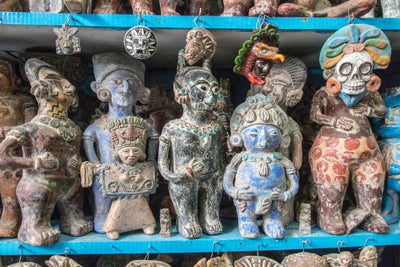 No trip abroad is complete without seeing the works of local artisans. In Mexico City that can be achieved by a visit to La Ciudadela Market. More than 350 vendors within the tented facility sell handcrafts ranging from woven textiles and wall paintings to pottery and porcelain dining ware. 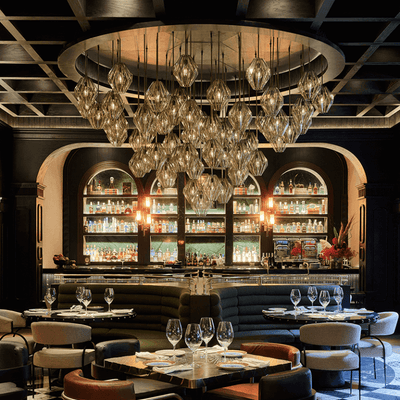 If you’ve never taken the time to consider cooking and food presentation as art, the restaurants in Mexico City will more than open your eyes to that perspective. Colmillo prides itself on fusing the best in gastronomy from Northern Mexico, New York City and Los Angeles to form its carnivorous menu of rich chorizo-laden quesos and tender steaks adorned with flaming hot butter. The interior design of the restaurant speaks to its elevated dining experience and you’ll get a taste of home from the sonic atmosphere which is a mix of old-school hip-hop, experimental rock and electronic music.

At Migrante, the architecture itself is a feature to take in, as are the flavors of the restaurant menu crafted by Chef Fernando Martinez. Watch the cooks eloquently prepare delicacies you’ve never tasted before — like foigras churros — across from the open kitchen as you sip unique cocktails that perfectly pair with your courses. 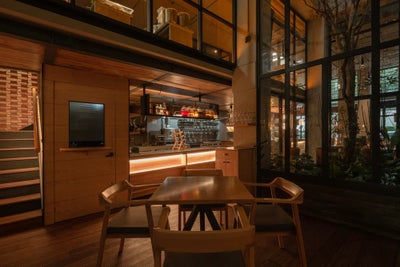 Seafood lovers will fall in love with the fresh offerings at Contramar. Here you’ll find everything from octopus to tuna prepared a myriad of ways, mahi mahi, and kingfish. Small plates are the way to go so you can sample a bit of everything as you watch passersby in the borough of Roma. 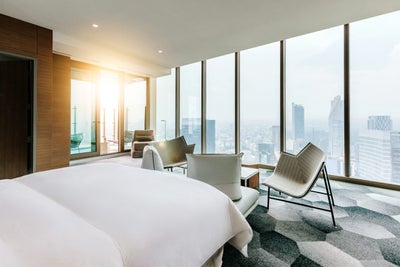 Luxury, convenience and hospitality define the Sofitel Mexico City Reforma Hotel which is a wonder of its own to explore with its four restaurants, restored library bar, indoor pool, spa, and fitness center. It’s really a good thing I hadn’t been to Mexico City before or else I might not have left my Prestige Suite, which was just about 100 square ft smaller than my LA apartment. And that’s exactly what the accommodation felt like with its walk-in closet, guest bath and coat closet, sitting area and bedroom with floor-to-ceiling windows, and a master bath that was absolutely the star of the show with the standalone tub in the center of the pristine white tiled and glass space. 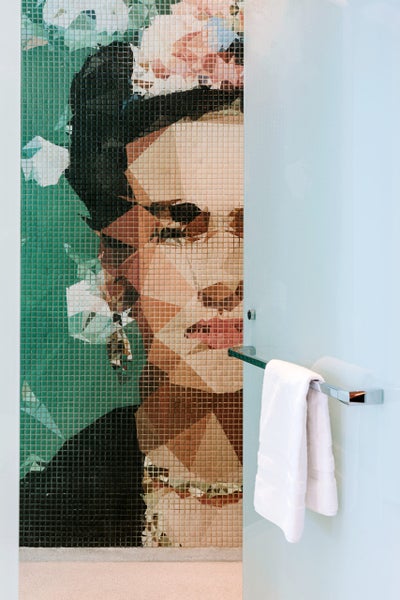 It’s in the bathroom of the Imperial Suite that guests will find a mosaic of Kahlo inspired by the popular 1939 piece by Nickolas Muray, Frida Kahlo on White Bench, New York (2nd Edition). This accommodation (as well as the Prestige Suite) also comes with exclusive access to Club Millésime, a private VIP lounge located on the 36th floor, that somehow manages to top the guest room views. Here you can snack on light bites to hold you over between lunch and dinner, order spirits and soft drinks, and enjoy the scenery which extends across what feels like the entire city. Afterward, head to Cityzen Rooftop Kitchen inside the hotel for a signature cocktail and good music. 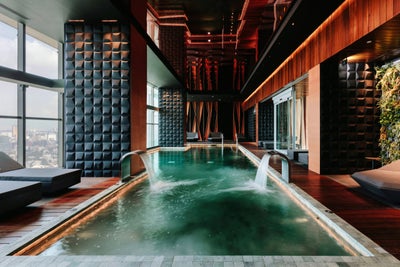 I’m bending the rules on the focus of my article here a bit, but after my experience at Sofitel Spa With L’Occitane, I think I’m allowed to consider massage therapy an art form as well. Whether or not that’s true, I can attest to the necessity of this experience after a day of sightseeing. And the indoor pool area is simply the most picturesque aquatic space I’ve ever seen. 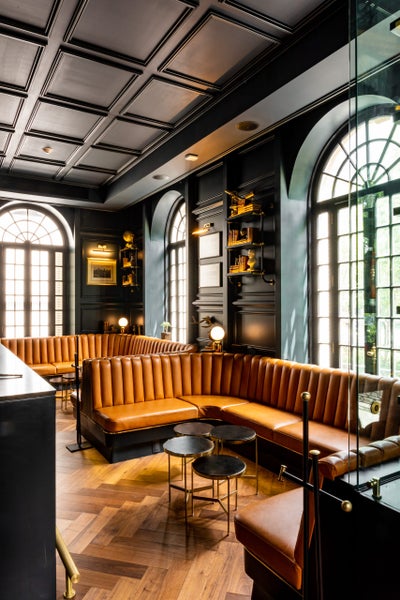 When you pull into Sofitel, you might notice a neon sign above a terrace that reads “Keep Quiet, It’s Our Secret.” I implore you to follow your natural curiosities in that moment and journey up the stairs to tucked away bar on the property which is part of the original home where Sofitel now exists. The owner donated pieces of his own collection of art and artifacts to complete the speakeasy-esque decor, offering yet another opportunity to dive into historic relics further blending the mix of French and Mexican culture within the hotel walls.

Whether greeted with “bonjour” or asked, “¿Cómo estás?,” the language of hospitality is the premier one spoken at Sofitel. And that’s exactly the experience you want to return to after diving into the unifying world of art within Mexico City.