Tatyana Ali stars in the new Lifetime holiday movie ‘A Picture Perfect Holiday,’ and HollywoodLife has an EXCLUSIVE preview of the film.

Tatyana Ali plays Gaby Jones in the Lifetime holiday movie A Picture Perfect Holiday, which premieres November 13. In this EXCLUSIVE preview, Gaby gets an unexpected surprise when she shows up at the cabin she rented. She’s minding her business when a man named Sean, played by Henderson Wade, comes downstairs in just a towel. 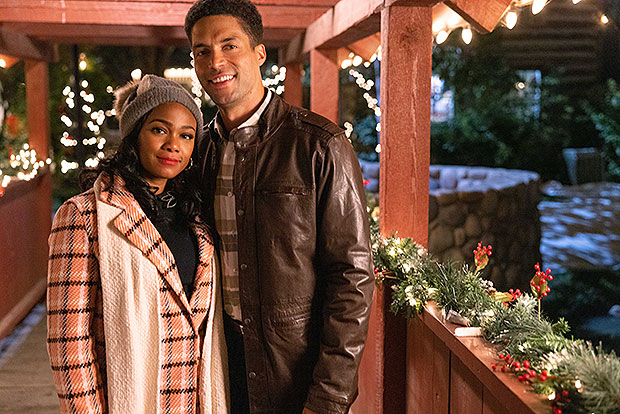 “Can I help you?” the man asks. This catches Gaby off guard. She has no idea who this man is, and he is thinking the same thing about her. Gaby asks what he’s doing at the cabin.

Turns out, they both rented this cabin. Gaby thinks there must be some mistake, while Sean believes this to be a hilarious prank. Gaby tells Sean she’s going to make a call to the woman who booked this cabin for her. Sean replies he’ll do the same on his end.

Gaby truly believes she’s the one who should be the only person in this cabin. “I think you’ll see you’re the mistaken one,” she says to Sean. Could this situation prove to be the ultimate holiday meet-cute?!

Gaby is a fashion photographer who is eager to make a name for herself and finally gets her chance when she lands a coveted job at a magazine. Encouraged by an editor, played by Dina Meyer, to attend the annual Christmas Photography Retreat in the small town of Pine Falls to ramp up her skills, Gaby reluctantly signs up despite not being a huge fan of the holidays. When she arrives, she learns her rental has been double-booked with wildlife photographer Sean but soon discovers there’s more to a photo than what you see through the lens. As the two fall for each other, their life choices start to get in the way and the two must decide if they’re willing to take a risk in order to share a picture-perfect holiday together. A Picture Perfect Holiday is part of the It’s A Wonderful Lifetime lineup and will air at 8 p.m. on Lifetime.