Australians who have lived and worked in Vietnam for years feel they’ve been abandoned by their own country without access to any coronavirus vaccines or a way to return.

Australia is sending 1.5 million vaccine doses to Vietnam as part of its efforts to help countries in the region struggling with the virus. It’s also providing $40 million to help Vietnam’s vaccine rollout, including providing technical advice and support to distribute the shots. 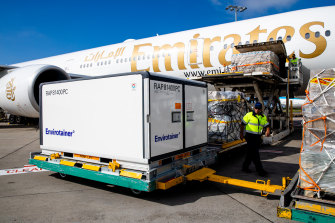 COVID-19 vaccine doses arriving in Australia. The country is sending 20 million doses to nations in the neighbouring region.Credit:Getty Images

However, unlike other countries, notably France, it hasn’t asked that any of those jabs be set aside for Australians who are for the most part at the end of the rollout queue.

Former Melbourne resident Michael Wilson, who has lived in Vietnam for four years, said the limits on the number of people who could return to Australia compounded the feeling expats had been left to fend for themselves.

France has provided vaccines to Vietnam via COVAX, including 670,000 doses announced last week, and is sending Moderna shots for a program to vaccinate French nationals in the country and their families.

The Sydney Morning Herald and The Age reported on Tuesday Australia has itself dipped into the COVAX facility, which is intended to help poorer nations access vaccines.

The Department of Foreign Affairs and Trade’s consular services charter says the government won’t pay for medical services, including vaccinations, for citizens overseas.

Mr Wilson said that should change for COVID-19.

“How can you say that you have a blanket policy or a long-standing policy of not rendering … medical assistance to Australians abroad when this is a global pandemic?” he said.

“If you stand behind that, ‘Oh, we’ve had a long-standing policy,’ gay marriage would not be a thing, the white Australia-only policy would still be a thing. All these things … can be changed, it’s just people need to stop and have some common sense about it.”

David Mangan has been living and working in Southeast Asia since 2007. He has a sportswear manufacturing business in Vietnam and family in the Philippines and has tried unsuccessfully to get vaccinated in either country.

“They basically tell you that you’re an alien in this country and that they’re not vaccinating aliens at the moment,” he said.

“I’ve spoken to a few fellow Australians that have been vaccinated but have had to basically lie about underlying health issues.

A DFAT spokeswoman said Australia was providing consular assistance to its citizens all over the world affected by COVID-19.

“Australia’s diplomatic missions, including in Vietnam, are working with foreign governments to allow Australians abroad access to COVID-19 vaccines through local vaccination programs, should they wish to do so.”

The government has been strongly encouraging Vietnamese authorities to provide equitable access to vaccines, including for Australians, and advocating for improved access to that country’s vaccine registration portal for non-Vietnamese speakers.

Mr Wilson and Mr Mangan both separately suggested a program to ensure expats had access to vaccines could relieve pressure on Australia’s quarantine system.

Mr Mangan said using the consular system could provide assurances about what vaccines Australians had received.

“Wouldn’t it be far better to say get to our embassy, let’s get you vaccinated, get your second jab, and you’re on your way back to Australia?” he said.