Follow
Home » Lifestyle » ‘Acting against our own interests’: WA Premier fires up on Australia-China relationship

‘Acting against our own interests’: WA Premier fires up on Australia-China relationship

West Australian Premier Mark McGowan wishes the federal government would stop its combative rhetoric with China, which he says goes against the interests of the nation.

Mr McGowan met on Wednesday afternoon with Prime Minister Scott Morrison during the latter’s visit to Perth, where the Premier made it clear he had a different view as to how Australia should approach its relationship with the Asian superpower. 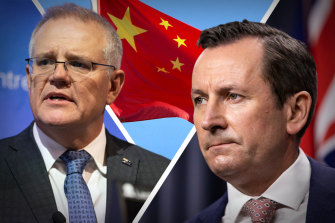 Prime Minister Scott Morrison and WA Premier Mark McGowan are not seeing eye to eye when it comes to the Australia-China relationship.Credit:WAtoday

Mr Morrison was in the city to give a foreign policy speech on getting agreement from liberal democracies to toughen institutions such as the World Trade Organisation before flying to the United Kingdom for a ‘G7 plus’ summit.

The Premier has long been a vocal critic of the federal government’s recent approach with China which has seen the trading relationship between the two deteriorate – with restrictions on barley, rock lobster, and other products – since calls by Australia for a probe into the origins of COVID-19.

An exasperated Mr McGowan did not pull any punches on Thursday, following his meeting with Mr Morrison, when he said he had a “very different” view on the relationship between the two nations.

“We are acting against our own interests,” he said.

“The Prime Minister has a view he needs to attack [China] on trade.

“I have a view that they are our biggest customer; we sell them literally 20 times as much as we buy from them, why do we want to undermine that?

“I have been very clear with the Commonwealth. I’m a Premier of the state that actually carries the nation’s economy.”

Mr McGowan said recent language from politicians and other senior government officials talking about potential wars with China was “insane”.

“It is absolutely off the planet and I don’t get it and I wish they would stop because it is not in our national interest in any way shape or form,” he said.

“WA continues to trade through COVID with countries who buy our products, particularly when iron ore is over $200 a tonne, that’s what’s supporting the national economy and yet we have politicians who want to destroy that.

“All I’d say to the Commonwealth government is they need to rethink this language. If we lose our trading relationship with China, the economic consequences for Australia will be absolutely catastrophic.”

Mr Morrison told Radio 6PR’s Mornings program in Perth on Thursday morning that trade issues had to be called out.

“I spoke with the Premier yesterday … we often meet when I’m in town and we had a good chat about these issues yesterday. I mean, barley producers in Australia, wine growers in Australia, have been targeted with trade sanctions that we believe are completely unconscionable,” he said.

“And we are seeking to take those up in the World Trade Organisation to see them resolved there.

Mr Morrison said Australia could never trade away its values or its sovereign integrity.

But Mr McGowan said tempering language was not a trading off of values.

acting, against, intere, Our, Own
You may also like: