Afghan interpreters still waiting for visas as the Taliban closes in

At least 100 Afghans who say they helped Australian troops and diplomats during the country’s long war are waiting for their visa applications to be processed while the Taliban sweeps across the country.

The United States has withdrawn 90 per cent of its forces and the Afghan government has proved incapable of halting the advance of the Taliban, which is now estimated to control about half the country and has a record of torturing and executing people who have collaborated with the US Coalition. 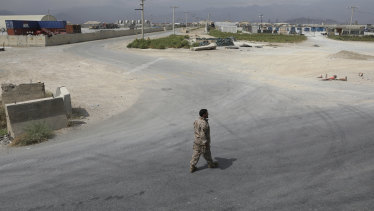 The United States has already left behind crucial military sites, such as the Bagram airbase, leaving the Taliban in control of much of the country.Credit:AP

More than 1480 Afghans who aided Australians and their families have been given special visas to come to Australia since 2013, according to Home Affairs figures, with 230 handed the travel documents since April, when Prime Minister Scott Morrison announced the withdrawal of Australian troops.

Abdul Ghafar Stanikzai, a former human rights official in the Afghan province of Uruzgan, where Australian troops were stationed, said he had been in touch with an interpreter who had waited two years before being given a visa and was still waiting for a flight.

The man, who Dr Stanikzai did not name for security reasons, had been forced to move his whole family to Kabul, and then to different parts of the city, because he was afraid of reprisals.

“It’s a very big moral responsibility of the Australian government not to leave behind those who have served [Australia],” said Dr Stanikzai, who now lives in Adelaide. “It’s not just about them but their whole families.”

Jason Scanes, the founder of veterans advocacy group Forsaken Fighters, has been contacted by many of the Afghans who worked with Australians in roles such as security guards, interpreters, and aid contractors. He says when their families are also factored in, there are between 1000 and 1200 people who deserve Australia’s help.

A spokeswoman for the Department of Foreign Affairs and Trade said locally engaged staff with a legitimate case are being given an opportunity to come to Australia.

“The Australian government is working to ensure each case is considered swiftly and those at risk of harm who meet visa requirements are resettled to Australia as soon as possible,” the spokeswoman said.

Workers hoping to depart Afghanistan have to go through checks to ensure their claims to have worked with Australian forces are genuine and they do not pose a security threat, which can be challenging when some were subcontracted or worked for Australia more than a decade ago.

The United States is due to leave Afghanistan by September 11 but has already pulled out of key places, such as Bagram airbase. Even the security of Kabul’s international airport is uncertain after the United States leaves, with the superpower hoping Turkish troops may ensure the gateway remains open.

President Joe Biden’s administration is expediting processing for workers who helped its forces and was looking at relocating those at risk, estimated to number about 18,000, to a third country while it processes their visas.

The United Kingdom is also moving quickly to get its Afghan contractors out of the country, with its Home Secretary, Priti Patel, calling it a “moral obligation” for the country.

Canada and New Zealand had priority resettlement programs around the time they withdrew from combat roles within Afghanistan, but no longer do, leading to accusations that many of their forces’ Afghan colleagues were left behind.

Stuart McCarthy, a former army officer who served in Afghanistan, urged Australia to evacuate people first then process them at an Australian military base.

Otherwise, Mr McCarthy said, “It’s not only costing lives, it’s doing irreparable damage to our international standing and our defence capability” by creating an impression Australia would not look after people who help its forces in future wars.

But there is another larger crisis on the horizon. William Maley, an emeritus professor of diplomacy at the Australian National University, said millions are likely to flee Afghanistan if the Taliban reasserts a draconian grip as it had previously.

“It has almost reached the point where … exodus is the only option for people who want to have a liberal or democratic life experience,” he said.

Previous conflicts pushed more than 6 million Afghans out of the country and the population is now much larger, at about 39 million, and younger than in the past, with about three quarters aged under 30.

Fans are comparing Victoria Beckham’s dress to the ‘Annabelle’ doll