Aged care workers were meant to be vaccinated months ago: Albanese

Labor leader Anthony Albanese is calling for a new federal program to deliver vaccines to almost 200,000 aged care workers, accusing the government of ducking responsibility for people who were promised priority and meant to have been vaccinated months ago.

Mr Albanese said the federal government was responsible for aged care as well as the vaccination program and should launch an immediate scheme to immunise workers rather than leaving the task to state authorities and the workers themselves. 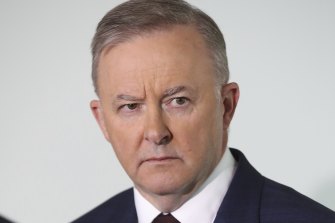 The Labor move comes after Prime Minister Scott Morrison announced a national cabinet decision to make it mandatory for aged care workers to be vaccinated, offering $11 million in federal funding to help employers and staff achieve the goal by September.

Mr Albanese said the funding was not enough when the government should be doing the work to get the staff vaccinated as it promised to do in February with a “surge workforce” that was meant to immunise residents and staff.

“Aged care workers have been given a two-month deadline to be vaccinated, so instead of blaming aged care workers for not getting the jab, Scott Morrison needs to get the jabs to the workers,” Mr Albanese said.

“This is Morrison deflecting responsibility to the workforce themselves for the low vaccination rates when he is responsible for it.

“So now they’ve made this declaration, the government has to ensure that the rollout of the vaccine is facilitated by them.”

Health Minister Greg Hunt announced on February 16 that contractors such as Aspen Medical would travel to aged care centres to vaccinate residents and staff, with both groups named in the Phase 1A group meant to be given priority.

“It is anticipated that the rollout to aged care facilities will take approximately six weeks,” Mr Hunt said.

The program fell behind schedule, with staff missing out on vaccines, during a series of setbacks for the rollout when the European Union prevented doses from being shipped to Australia.

Only one-third of the 263,000 workers in the aged care sector have been vaccinated, leaving 175,000 to be immunised under a rare mandatory order agreed by national cabinet on Monday following advice from the Australian Health Protection Principal Committee (AHPPC).

This means the $11 million in additional federal funding amounts to about $63 for every unvaccinated worker, raising questions about whether it would be enough to meet the deadline.

Mr Morrison said on Monday night the new rule only came after national cabinet members conducted some “determined questioning” of the AHPPC, which is made up of state and territory chief medical officers.

In a sign of unease over the mandatory rule, Victorian Chief Health Officer Brett Sutton suggested his state might not implement the order at a time of concern over vaccine hesitancy and workforce shortages.

Industry groups also warned about a lack of consultation on the change and called for the announcement to be backed by new measures, with Community Aged Services Australia saying the staff vaccinations should be delivered at aged care homes.

Mr Albanese said Mr Morrison should not rely on state clinics to deliver the vaccines when the Prime Minister had set a target to protect the workforce.

aged, care, meant, t, Were, Workers
You may also like: