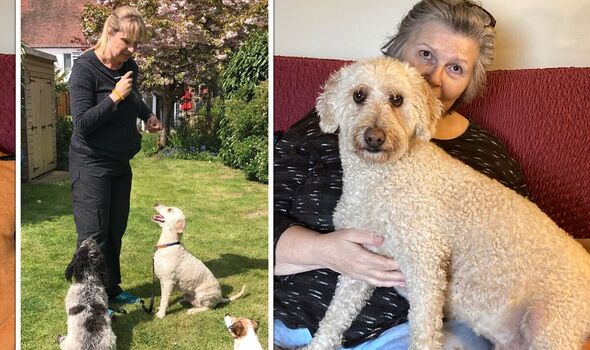 A “special needs” puppy that would go on weeks-long tantrums has been transformed into the “calmest” boy.

Five-month-old Charlie hated children and went on huge strops after tiny changes to his routine.

His heartbroken owner Nicole feared her beloved Spanish Water Dog would bite a stranger and be put down.

But bouncy Charlie has been saved after dog trainer Jo Sellars found the trick to calm him by tickling his chin.

Jo, 52, told the Express he was “as close as you can get to a lost cause” but after months of training he has become “as good as gold”.

Jo, of the Guildford area in Surrey, believed Charlie had been left traumatised after being repeatedly pushed, prodded and shouted at as a pup.

“Every time a stranger would go near him he would growl and bear his teeth,” she said.

“[Without care] he probably would have been put to sleep by now because he could have potentially bitten a child. Obviously he would never be able to be with a family.”

But Charlie was still a pup at heart and “amazing” Nicole would never give up on him.

“We giggled that he’s possibly on a spectrum of special needs of the dog world,” said Jo.

“He’s happiest when he’s got a very strict routine.

“He would get grumpy. If you went out for a walk and his routine for the week had been changed, he would not come back.

“He would stay away for an hour or so at a time. It went on longer than one week.

“He got the nickname Charlie Bean, after a jumping bean and his amazing jumping ability.”

Asked how she managed to tame Charlie, Jo said it took “a long time” before Charlie would even let her touch him.

“It was just very slowly watching his body language, slowly closing up the distance and finding what he really likes.

“It was chin tickles all along.

“To him, that’s a non-threatening touch.

“Over the next months, we built on the games to get him to come back to his owner from ever-increasing distances and places as recall was non-existent before.”

Two years later Charlie is a transformed dog, though he still bears a bit of a grudge against children.

“Even out and about he’s much more tolerant, he will happily play with strangers once he knows they are not a threat, he will go up and sniff people,” said Jo.

“He will be the calmest dog around.”

Having a dog who could never be in a car with children and was uncomfortable around men would put many owners off, said Nicole, but “thankfully the owner has got the lifestyle to be able to do that.

“He’s not put into situations where it can be difficult for him but actually he’s got a very good network of people he trusts.”

Jo, who has trained thousands of dogs over seven years, said coming out of lockdown had been hard on our four-legged friends.

“Separation anxiety may not show until there’s a big change that triggers that,” she said, such as children leaving the family home or owners going back to the office.

Jo said for “really serious aggression” she would refer dogs for specialist treatment but Charlie’s case had “proved that training can start later in life.”

“They are not a lost cause, it may take a little bit longer to change some habits but it’s perfectly possible,” she added.