Could Amazon make me a ‘glamazon’? Just when you thought it couldn’t take over any more of the world, the internet giant yesterday opened its first high-tech salon in Britain. So did it deliver the goods?

Sitting in front of a mirror with what looks like a small, silver hot air balloon wobbling atop my head, and a billowing cloud of what could be smoke wafting up towards the ceiling, I’m slightly worried Amazon might be over-egging its theme.

Save for the time I saw a stylist’s hair-dryer meet a spark-filled end, I’ve never visited a hair salon and been concerned that I may ignite. But here I am, perusing glossy magazines on an Amazon Fire tablet, inside the grey and orange-themed (natch) confines of Amazon’s very first hair salon and, by the looks of it, it’s me who is the Amazon Fire.

It’s all quite normal, stylist Elle reassures me. It’s just a steam treatment, one of an array of technological gimmicks being deployed by online shopping behemoth Amazon as it extends its tentacles into the world of hair.

If I’m honest, Amazon has become something of a crutch for me in the past year — although I have diligently tried to support businesses on my doorstep, nevertheless it feels as if there is a furrow down the front garden where the firm’s delivery driver has beaten a path. 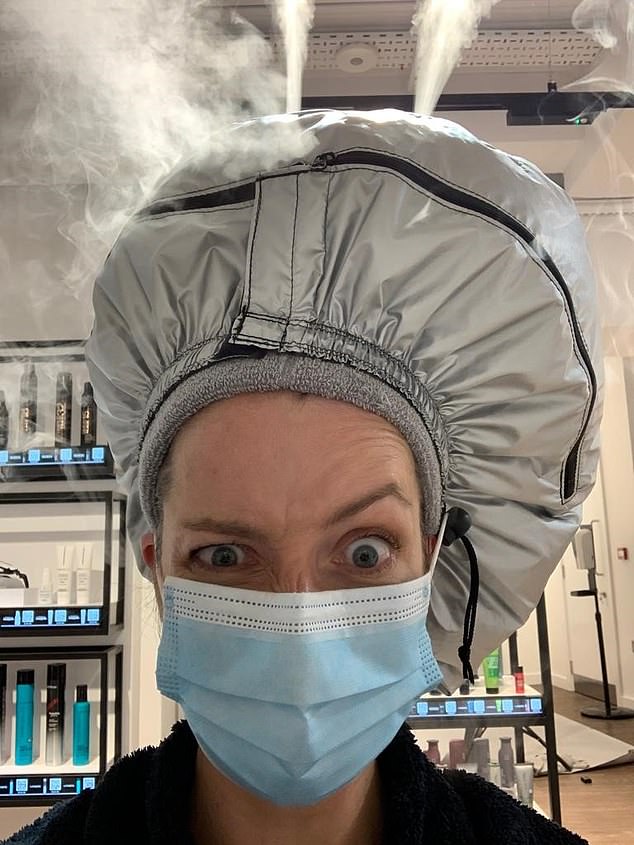 Beth Hale tries a hair steam treatment, one of an array of technological gimmicks being deployed by online behemoth Amazon as it extends its tentacles into the world of hair

My Prime subscription has paid for itself in spades; this week it was a replacement clothes horse, last week an emergency set of goggles when swimming lessons restarted and we couldn’t find the pair I ordered in identical circumstances last year.

We’ve resisted Alexa in our little household of four, but what with the streaming services, Kindles and Morrisons’ grocery deliveries, it feels as if Amazon probably knows more about my life this past year than some of my relatives.

But never did I envisage entrusting my lockdown locks to the same company that has sent a terrifying mountain of cardboard my way since the pandemic began.

And yet here I am, enjoying (albeit with some trepidation) the curious warmth enveloping my scalp as steam bilges out of a machine at my side and through a bendy tube a bit like a vacuum cleaner attachment fixed to the back of the over-sized shower cap on my head.

The news that Jeff Bezos was extending his reach into the beleaguered hair-industry, so hard-hit by successive national lockdowns, was given a mixed reception when it emerged last month. Amazon should stick to its original online shopping trade and leave the experts to the job they do best, said some. 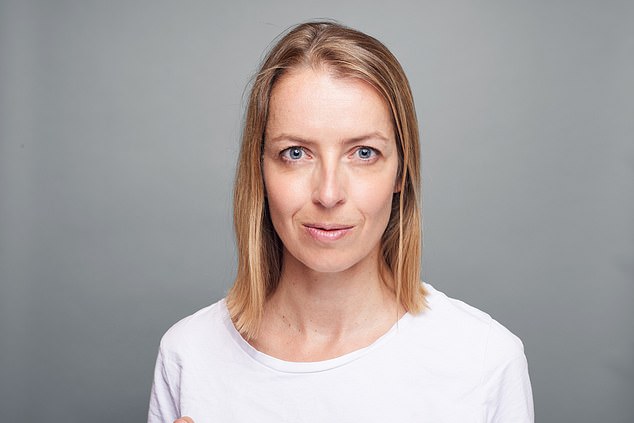 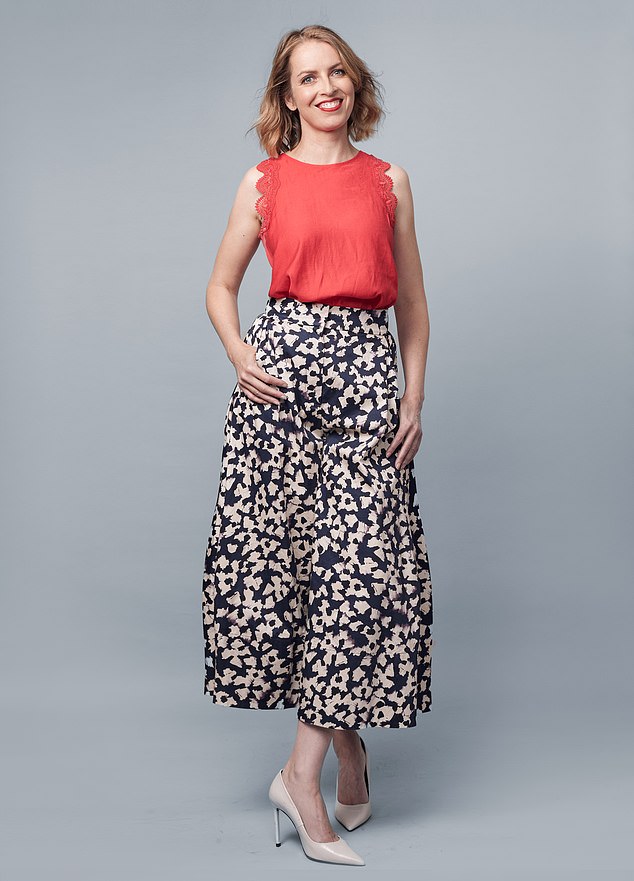 Beth pictured after the makeover. She said the experience was like ‘being a kid in a toy shop’

With astonishing growth — Amazon’s UK sales soared by 51 per cent to a record £19.4 billion last year as people stuck at home turned to the internet instead of the High Street — it’s not as if the giant, which has long been subject to criticism over the thorny issue of how much it hands over in taxes in the UK, needs to expand into yet more new territory.

Yet expansion is happening apace. It has opened three contactless Amazon Fresh grocery stores already this year and, only this week, it has emerged that it is in talks to acquire MGM, the Hollywood studio behind the James Bond and Rocky franchises.

But yesterday, with very little fanfare and — hearteningly — in conjunction with independent salon owner Elena Lavagni, of Belgravia-based Neville Hair & Beauty, Amazon threw open the doors of its first salon on the appropriately named Brushfield Street, in London’s trendy Spitalfields.

Elena, whose six-storey townhouse-cum-salon on the other side of town is a favourite of beauty editors (the signature do is a ‘five-day blow dry’, a hard-working style which promises to get you through a full working week), is positively brimming with enthusiasm for the project, which has been bubbling away since 2018.

‘It’s exciting because to me it moves the industry in the right direction,’ says Elena. ‘We need to be embracing technology more. 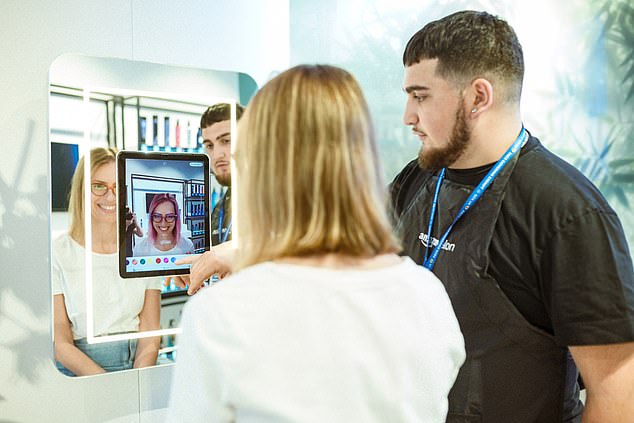 ‘Working with a company like this, you learn so much, they are so clever and really are putting the customer central to everything.’

I certainly don’t feel as if I’m being swallowed up by a faceless conglomerate as I walk through the doors of the salon and am greeted by a small team of stylists and front-of-house staff.

Nor do I feel as if I’m walking into something out of a sci-fi movie, though there is a slightly industrial tone to some of the décor. It’s a bit like opening a glossier, beautified version of an Amazon parcel — the colour scheme (which even stretches into the grey-tiled bathroom) is predictable, but toned down. But the Amazon Salon logo on the walls does make me wonder if I’m going to turn a corner and find a shelf pushing the latest smart technology.

Instead, I have my temperature taken (a point at the wrist device), am asked to sanitise my hands and am given a tour, by Gokhan, one of five stylists working here. 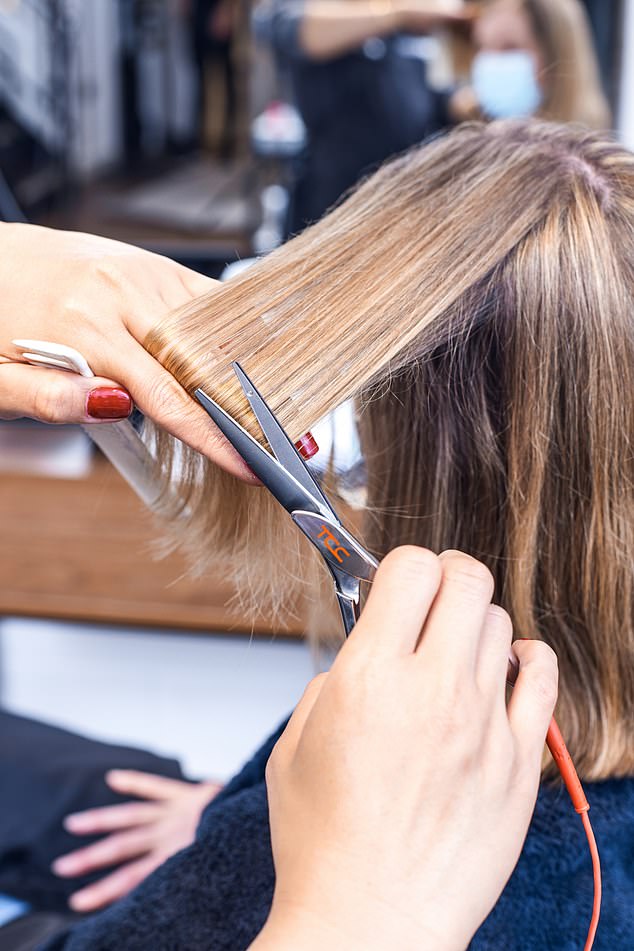 Dusting is what Elle is going to do with thermal scissors, which are heated blades used to round off and seal the hair tip to help avoid split ends developing

He ushers me to the Augmented Reality colour bar. Sadly, it can’t dispense with the need for face masks, but it does let me see what I would look like with hair in every colour of the rainbow. I’ve played with technology like it on my phone, but on a big, interactive screen it is much better.

The terminology is bewildering: ombre, sombre, all-over, grown-out and the colours are simply endless. I fear appointments here might become drawn out.

Bleached blonde like Daenerys Targaryen from Game Of Thrones definitely isn’t me, but what about pink? It’s a shame there’s no time for a patch test. There’s a selfie wall, where you can take pictures of yourself with lighting tailored to the needs of the social media crowd. Alexa is on hand to deliver music, apparently courtesy of Echo Studio, which create an ‘immersive 3-dimensional soundscape in studio-quality audio’, whatever that means.

This less-than-with-it customer is just grateful it plays tracks with lyrics I know, and at a volume that doesn’t drown out the restorative effect of the treatment Elle is massaging into my scalp before rolling out the first of several hi-tech services the salon is showcasing.

I thought I was here to be turned into a Glamazon, now I can’t help but think about housework.

Dusting, in this case, however, is what Elle is going to do with thermal scissors, which are heated blades used to round off and seal the hair tip to help avoid split ends developing and stretch time between appointments.

It’s only as she finishes using the scissors and urges me to feel the silky finish that I realise the scissors are heated to 180C. Frankly, I’m relieved I didn’t know beforehand.

After a mint-infused deep conditioning treatment, it’s on to the steamer. (What is it with the cleaning theme here?)

The machine was only released to the market last year and, apparently, it works wonders for clients who have had colour or a deep conditioning treatment, the steam helping to seal the cuticles of the hair, keeping in moisture and delivering shine. The cost? I’m surprised to be told it’s included with the treatment.

Save for wondering if I’m going to send the whole thing toppling over, unleashing scalding steam when I move, it feels rather dreamy, so much so I barely look at the Amazon Fire tablet at my fingers — each customer gets one, loaded with every glossy magazine you could wish for.

There are five stylists, who will be doing everything, even the shampoo — and the price structure is surprisingly modest considering the location.

A half-head of highlights and a cut and blowdry here would set me back £138, which is less than at my regular salon. That said, I could spend £150 on a liquid gold smoothing treatment, which uses keratin (and 24ct gold) to renew tired and damaged tresses.

‘We have designed this salon for customers to come and experience some of the best technology, haircare products and stylists in the industry,’ said UK manager at Amazon John Boumphrey before the opening.

‘We want this unique venue to bring us one step closer to customers and it will be a place where we can collaborate with the industry and test new technologies.’

Of course, it’s not just new technologies, there’s also a product — or products — to sell.

The ecommerce giant recently launched a professional beauty section on its website, selling 10,000 products ranging from clippers to curlers and hair-dryers, aimed at the small businesses which have only recently been allowed to reopen as lockdown restrictions are eased.

Here there are products aplenty for customers, all supplied by L’Oreal. But no need to find room in your handbag — this is Amazon after all. Instead, customers can simply scan a QR code and have their desired product delivered to their door.

Don’t know what to choose? A particularly whizzy corner of the salon allows me to point a finger at a bottle by Redken, named One United, and as if by magic all the relevant information about what said product claims can do for my locks flashes up on screen before me.

Elena insists this new venture on hairdressing doesn’t for one minute damage the industry for independent stylists, which she is.

‘Absolutely not,’ she says. ‘I love my industry too much to support something that will injure it. It’s just a different way of looking at what we do and, after all we have been through [over the past year], we need something a bit extra.’

My experience as a customer of Amazon Salon has certainly been an unexpected treat. I feared I’d be a product being bundled through a process, much like the goods in the Amazon warehouse.

I half wonder if the salon staff are going to parcel me up in a cardboard box adorned with a swoosh and send me home via courier. Instead, feeling throughly pampered thanks to my post-lockdown overhaul I swish out of the door feeling almost a Glamazon.

Amazon, FI, It’s, Opened, yesterday
You may also like: