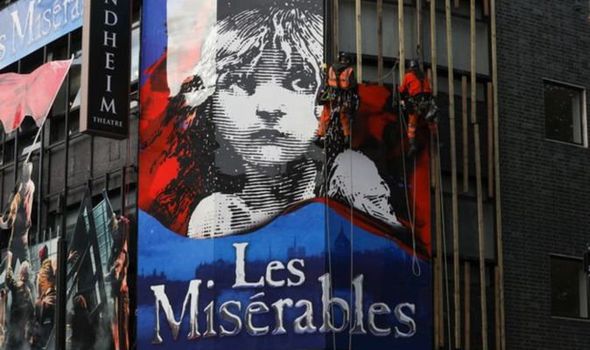 Stephen Langston, programme leader for performance at the University of the West of Scotland, said the ratio may be unintentional but is present.

However, confusing that is, it seems musical design – visual, music and plot – have elements of the golden ratio throughout.

Stephen studied the golden ratio at Liverpool University and his fascination with music made him realise a lot of ‘interesting things’ seem to happen about two-third of the way through songs.

He said: “I started a PhD at UWS, and it was aspects of this research that uncovered the close relationship to the golden ratio and sung through musical form. The entire PhD took six years to complete (part time) but this also involved testing my theories out via writing a full scale sung through musical ( The Green Door).

“It was discovered that it is very difficult to create a musical in a golden ratio format without exceptional planning, so a guide, structure format and template was created directly from the PhD research to help other composers try the process. This system is now being tested (nicknamed the Marley System, as it was created when my first son was born).”

At three in the morning, after Stephen had spent many months analysing and calculating golden ratio patterns, it all clicked.

He said: “I was astonished to discover, not that the main synopsis points occurred at golden ratio points, but how accurately they occurred, and continued to occur.

“What became even more interesting was then analysing a further ten west end musicals to discover they all shared the same characteristics and matched the golden ratio ‑ some with greater accuracy than others, however, the match was there.”

Changes throughout the plot matched all 16 golden ratio points divided by Stephen. These could include a dramatic moment, a character death, a key change or a visual change in set or choreography.

It’s not just Jesus Christ Superstar that shows elements of the golden ratio though.

After analysing it even further, Stephen discovered that the further a musical was away from the golden ratio, the less successful the musical was in box office duration.

For instance, Les miserable and Phantom of the Opera have a 99% accuracy match.

“The musical Chess was additionally analysed and demonstrated one of the least matches to the GR (however, there was still a match). Tim Rice has famously said on several occasions he got the story wrong, and the Marley system backs that up. Who knows, if Tim utilised the system, you never know, he might get a Les Miserable type box office run which obviously translates into box office success.”

Although a lack of the golden ratio should not put you off a musical.

Stephen said: “Musicals do not need the golden ratio to be a hit. Musicals are hits because of the genius composers, writers and producers who team together to create wonderful pieces of art.

“However, the research is demonstrating that the Marley System can be used as a guide to create sung through musicals which gives the structure a solid form that can be associated with our most successful musicals.

“To get a hit, you need to marry your story with appropriate melodies, lyrics, harmonies, dance, costume, set, lighting etc – and a lot of luck.”

Stephen is using the Marley System to compose a new 2-hour concert piece of music for orchestra and choir (The Scottish Fantasia).

The story structure has been mapped out and soon to be divided into time durations to create a perfect match to the golden ratio.

“When I composed The Green Door as part of my research the process was utilised to try ideas out ‑ ‘let’s see what would happen’. The results led to the creation of the Marley system which can now be utilised to create an exact match of the golden ratio in durational form. It’s up to the composer, lyricists, and story writers to get the rest right.

“The next stage of the research is to analyse concert music and non-sung through musicals. Who knows what we will find there, but I would not be surprised to find a golden ratio match!”