Follow
Home » Lifestyle » Andrews campaigned to help roll Morrison. Why hasn’t Albanese been by his side now?

Andrews campaigned to help roll Morrison. Why hasn’t Albanese been by his side now?

It wasn’t a rally, it wasn’t a campaign doorstop and it certainly wasn’t before cameras, microphones or journalists.

When Anthony Albanese finally appeared alongside Daniel Andrews during the Victorian election campaign on Monday, it was at a small private event at a suburban bowling club in Port Melbourne, with local candidates and a small gathering of state Labor volunteers. Unusually, journalists were not alerted to the event. 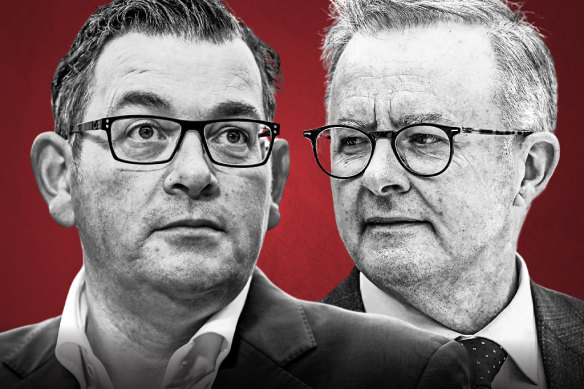 Anthony Albanese has been an absent figure in Daniel Andrews’ campaign.Credit:Marija Ercegovac

The prime minister’s absence from the state campaign stands in stark contrast to the devastating political hit Andrews delivered to Scott Morrison — standing shoulder to shoulder with Albanese — at a joint event in suburban Box Hill, in the federal seat of Chisholm, during the May federal election.

“Every federal dollar that Victorians get from the miserable Morrison government, it’s as though we should, we ought to bow our head and treat it like it’s foreign aid,” Andrews thundered at the time, two weeks before the seat fell to Labor.

Opposition Leader Peter Dutton, who is not a popular figure in Victoria, has also been absent from the campaign. 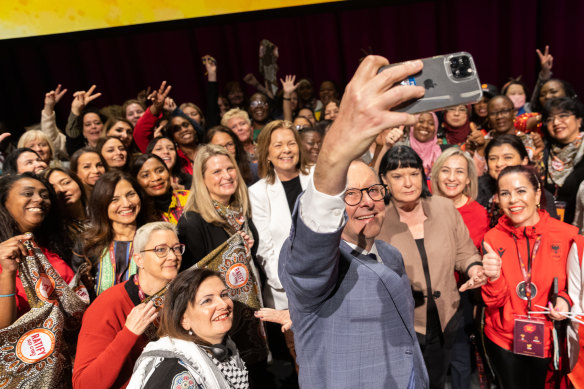 The prime minister stopped for selfies with union delegates at an IR conference on Monday, but did not attend any public election campaign events. Credit:Jason South

But the absence of Albanese, a recently elected popular prime minister, is curious when Andrews is battling against a two-term record of incumbency, pandemic fatigue and rising unpopularity.

After all, both men are members of the Socialist Left faction and have known each other for close to three decades. Albanese’s absence has prompted questions about the relationship between the two leaders — not so much personally, but politically.

Retiring Richmond MP and former minister Richard Wynne has known both men since the mid-1990s when he worked for former deputy prime minister Brian Howe, Andrews worked for former federal MP Alan Griffin and Albanese was newly elected to parliament.

Wynne, who was at Monday’s event in Port Melbourne, says: “There is a genuine warmth and friendship between them and that’s not a bad thing for Victoria.” 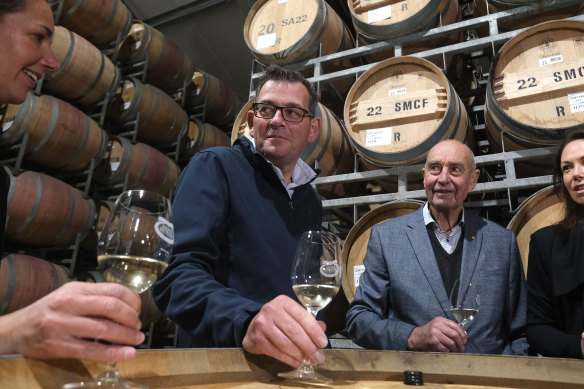 “Albo came down to give the troops a rev-up. The two of them were more than just comrades, they were almost like brothers,” he says.

Back in November last year, Albanese posted a photograph of himself and Andrews enjoying a barbecue together and noted the pair had once been housemates.

That accommodation was a flat in Queanbeyan, a small NSW town on the border of Canberra, that Griffin — Andrews’ former boss — and Victorian MP Lindsay Tanner shared. After Albanese was elected in 1996, he had also stayed at the flat during sitting weeks for a number of months and, after Andrews started travelling to Canberra to work with Griffin, he’d slept on the couch.

Griffin said it was not the tidiest place, comparing it to the falling-apart house shared by four students in the riotous early 80s British comedy The Young Ones, “but with three Vyvyans [an anarchist punk] and one Mike”.

Griffin says Andrews and Albanese get along fine and “I’ve never seen any evidence to the contrary”.

But a state Labor operative, who asked not to be named so they could speak freely, says the pair have had a good relationship in the past, “but since Albo became leader of the opposition there was a level of mistrust as Dan does what he has to do for himself”.

“At the start of the pandemic, the federal opposition was completely shut out of national cabinet and they were definitely not happy about it.”

“It would help federal Labor if Dan took a haircut. Being able to hold seats like Cooper and Macnamara will become harder against the Greens if you have an arrogant state Labor government.” 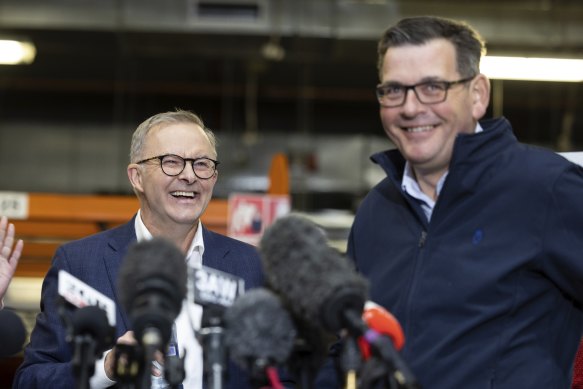 On May 10, Daniel Andrews appeared with Anthony Albanese on the federal campaign trail to slam then-prime minister Scott Morrison as bad for Victoria. Credit:Alex Ellinghausen

Staff in the Albanese and Andrews offices point out the prime minister has had a busy month since the writs were issued on Monday, October 31. Federal parliament sat for a week, and he is just back from a nine-day trip to Bali, Bangkok and Phnom Penh.

The first event was with federal Labor MP Josh Burns in suburban Balaclava on October 31, when Albanese promised to be back in Victoria and on the hustings.

“I’ll be with the premier and I will campaign, unlike the Leader of the Opposition, who has apparently been barred from coming to Victoria,” Albanese said at the time, when asked why he wasn’t standing alongside Andrews. 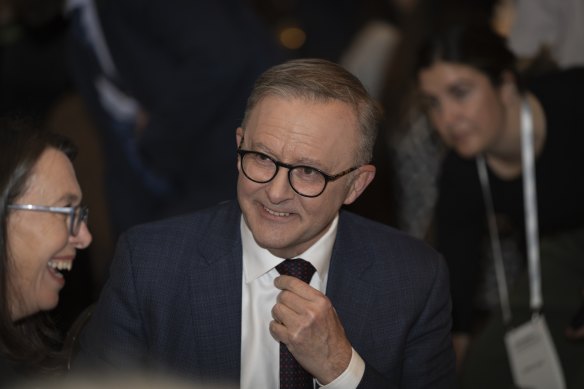 The prime minister was in Melbourne in the first week of the Victorian campaign, giving a keynote speech at a Melbourne University conference and appearing on radio and TV, but discussing federal matters. Credit:Eamon Gallagher

The state government at the time was focused on the flood response and the pair issued a joint media release announcing an $877 million recovery support package for those hit by devastating floods.

Two days later, as the Victorian campaign started in earnest after Cup Day, the prime minister was back in Melbourne, but not on the campaign trail. Instead, he appeared on Melbourne’s Fox FM, Network Ten’s The Project and then delivered a speech at the Economic and Social Outlook Conference at Melbourne University.

A Victorian federal Labor MP, who asked not to be named, was surprised to learn that Albanese had been at the private campaign event on Monday.

He sums it up like this: “If I was Albo, I would stay well away. Dan isn’t particularly popular.”