Ariana Grande performed for the first time following her surprise wedding to Dalton Gomez this month, lighting up the stage alongside The Weeknd as the duo kicked off the festivities at the 2021 iHeartRadio Music Awards.

It was just the first of many memorable moments throughout the evening on Thursday that got social media excited, including an epic performance by Usher, a truly bizarre performance by Doja Cat and an incredible tribute to Elton John.

But before Demi Lovato, H.E.R. and Brandi Carlile could take the stage to pay tribute to one of the most important icons in the history of popular music, Coldplay frontman Chris Martin courted controversy 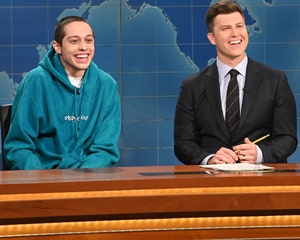 Pete Davidson Hints at SNL Exit: 'Ready to Hang Up the Jersey'

Ariana Grande was glowing in a stunning purple gown as she and The Weeknd opened the show just one day after Grande and Gomez offered fans their first glimpse inside the intimate affair that went down on May 15.

There were reportedly only around 20 people there for Airana’s big day — and millions tuning in for her first stage appearance since that momentous occasion. Grande joined The Weeknd for a performance of their song “save your tears” from his latest album, “After House.”

Fans were loving the look, the voice, and even the way The Weeknd looked at her — clearly in awe and in rapturous musical joy — as she effortlessly soars high to hit those notes so effortlessly. 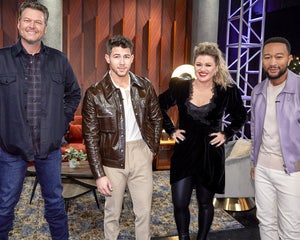 Ariana Grande Joins The Voice — Which Coach Is She Replacing?

Ushering in the Greatest

If there’s one name that’s associated with the peak of Usher’s career, it would have to be Lil Jon. They may not have collaborated over and over again, but anyone who was alive in 2004 can still find themselves with “Yeah!” stuck in their head just from any mention of it (you’re welcome).

As such, it was a real treat when Lil Jon actually joined the night’s host to perform a bit of that song during Usher’s incredible medley of some of his greatest hits. He took viewers through his stellar catalog, showing off his timeless vocals, looks and dance moves.

He easily weaved through “Love In This Club, “U Don’t Have to Call” and “DJ Got Us Fallin’ in Love” before welcoming Lil Jon to the stage.

And before the show even started, Usher showed us why he’s in such an incredible mood, revealing that he and girlfriend Jenn Goicoeachea are expecting. It will be their second child together, and his fourth.

Coldplay frontman has been friends with Elton John for a long time now, but you might not have known it from his appearance honoring Elton with the Icon Award.

“I hope to goodness that he hasn’t messed with what I am about to say because I don’t really now anything about Elton John and I’m just going to read what iHeart wrote for me,” Chris said upon taking the stage, joking that he’d just gotten into a fight with the cue card guy.

He then established what was apparently going to be the format for the comedy stylings of one Chris Martin for the evening, parody titles for Elton John songs. Hilarious, right?

He kicked things off by joking that Elton’s aspirations as an actor failed, but we got the song, “I’m Still a Stand-In” from it. He then pushed the envelopes of taste a bit with an even more crude parody.

“My favorite Elton songs are the romances, particularly the one he wrote for his husband’s parents — ‘Don’t Let Your Son Go Down On Me,'” Martin laughed. Thankfully, Elton and husband David Furnish were laughing, too.

Friends Reunion: Memories, Surprises and How a Cast Romance Fueled the Show

Following a video tribute to Elton John, a clearly flustered Lil Nas X took the dais to honor Elton John as an inspiration and trailblazer for the LGBTQ+ community, as well as almost anyone out there who’s always felt they were a little different.

He then welcome to the stage with what turned out to be an incredible tribute to Elton’s career, Demi Lovato, H.E.R. and Brandi Carlile. Other memorable performances on the night, which you can see below, include Doja Cat’s alien abduction extravaganzea, Dan + Shay, Bruno Mars and Anderson .Paak’s Silk Sonic,