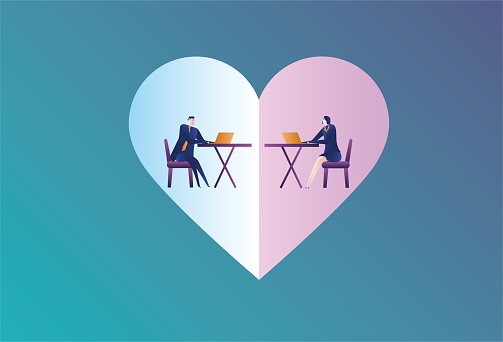 Cuffing season can make it a little more tempting to have a festive fling with a co-worker.

Not to mention, there’s the office Christmas party, where you’re all looking your best and any usual awkwardness vanishes with a margarita or two. It can get a bit flirty.

But if you’ve engaged in a harmless flirt with the handsome accounts manager or the gorgeous data analyst then you aren’t alone, as new research shows more than a quarter of Brits have admitted to flirting with a colleague.

Taking it one step further, 28% of Brits admit to having a relationship with their workplace crush – with 24% marrying a co-worker.

However, when it comes to volunteering information about their colleagues’ workplace flings, Brits were more forthcoming.

So how do Brits really feel about workplace romances?

General attitudes towards office relationships were favourable, with 36% expressing that they think it’s acceptable to have a relationship with a colleague and be open about it.

But maybe check with HR about your workplace dating policy first – just to make sure it doesn’t get you into trouble.

If you are contemplating a workplace romance then here’s how to go about it.

However, 15% of Brits said they think it is unprofessional to engage in an office romance.

Cities most likely to marry their colleague:

But perhaps the main question is: do office romances actually work?

Almost one in ten said they felt that workplace relationships never last.

However, despite the survey revealing that 19% of people said their office romance only lasted less than a month, there was a fair share of success stories.

In fact, 24% of relationships cultivated from the office lasting more than three years, with 12% lasting a decade or more.

When it comes to the employees most likely to engage in a workplace romance, workers in Belfast were the most likely to with Birmingham coming in second.

But those from Belfast are also more likely to marry a colleague with London following in second place.

The survey research was conducted by Mecca Bingo.

Cities most likely to have an affair with a colleague: