COVID lockdowns sliced the Australian economy by 1.9 per cent through the September quarter as household spending crashed and their level of savings surged.

The Australian Bureau of Statistics on Wednesday reported the national accounts showing the better-than-expected 1.9 per cent fall in the quarter. Economists had been predicting a drop of closer to 3 per cent. 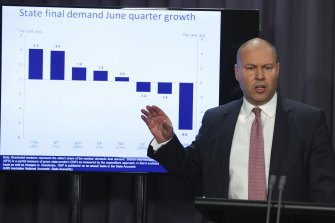 Treasurer Josh Frydenberg said the overall drop was no surprise, but was not as bad as expected.Credit:Alex Ellinghausen

The economy is now 0.2 per cent smaller than it was at the end of 2019, ahead of the coronavirus pandemic. It was the third largest quarterly drop in economic activity on record.

The largest quarterly fall was recorded in June last year at minus 7 per cent as the first wave of nationwide lockdowns hit the country. The second largest on record is minus 2 per cent, recorded in the June quarter of 1974.

The drop was driven by the lockdowns in NSW, Victoria and the ACT to stop the spread of the Delta variant. Household spending in those three jurisdictions fell by 8.4 per cent in the quarter, while across the rest of the country spending was up by 0.7 per cent.

Private demand detracted 2.4 percentage points from the result. Household spending on services such as hotels and cafes slipped by 5.8 per cent. Spending fell in 11 out of 17 consumption categories including transport services, clothing and footwear.

Treasurer Josh Frydenberg said the overall drop was no surprise, but was not as bad as expected and the figures are “very much a lockdown story”.

“Today’s national accounts reveal this stark difference in outcomes, experienced between those jurisdictions that were in lockdown, and those that were not,” he said.

Growth in the other five states and territories was up 1.6 per cent, Mr Frydenberg said.

The acting head of national accounts at the ABS, Sean Crick, said there was a substantial decline in household spending in jurisdictions in lockdown.

“The fall in domestic demand was only partly offset by growth in net trade and public sector expenditure.”

Public demand added 0.7 percentage points to growth, with some of that due to extra health-related spending to deal with the pandemic.

The NSW economy took the biggest dive over the quarter as Sydney spent the entire period in lockdown. State final demand, which excludes imports and exports, fell 6.5 per cent in the state. Victoria and the ACT also experienced falls of 1.4 per cent and 1.6 per cent respectively.

In NSW, there was an almost 11 per cent decrease in household consumption as lockdowns across the state hit spending. This was particularly concentrated in the recreation, hotels, cafes and restaurant industries. Lockdowns also hit construction activity.

A 5 per cent increase in government consumption helped to offset some of this decline, largely driven by more state and local government employees on the frontline to help with the vaccination rollout.

The hospitality sector bore the brunt of the lockdown impact, down 26.4 per cent through the quarter. It subtracted 0.5 percentage points from the overall result. It was partly offset by the mining sector which expanded by 1.7 per cent, adding 0.2 percentage points to overall growth.

“Household disposable income rose by 4.6 per cent in the quarter to be 2.9 per cent higher.”

“With millions of households in lockdown, the savings ratio spiked to 19.8 per cent. This is money that will be spent across the economy as restrictions are raised and Australians go about their daily lives.”

The Treasurer said with lockdowns behind us, the economy is recovering strongly.

“Consumer spending has lifted sharply since the end of lockdowns, with retail trade up 4.9 per cent in October, and retailers reporting strong demand with more than $5 billion spent on last week’s Black Friday sales, up 50 per cent on the previous year,” he said.

He said 350,000 jobs had come back since the start of September and job ads are more than 30 per cent higher than going into the pandemic and categorised the result as a strong economic performance given the pandemic presented “the biggest economic shock since the great depression”.