Despite the recent move to bipartisan support for net zero emissions from both major parties, Australian companies are buying the vast majority of carbon credits they use to offset their pollution from projects in other countries such as India and Indonesia.

Big industrial polluters are not required under Australian regulations to reduce their emissions in line with the national goal to decarbonise, but pressure from investors and customers has pushed many of them to set their own goals to reach net zero carbon pollution. 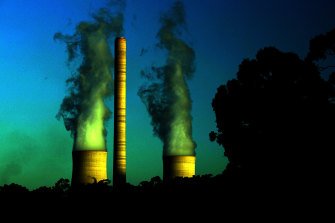 Big industrial polluters are not required under Australian regulations to reduce their emissions in line with the national goal to decarbonise.Credit: Rob Homer

That means transport, energy, mining and manufacturing companies are investing in alternatives to fossil fuels to power their operations, but costs and implementation will drag this process out over years.

Meanwhile, industry is buying carbon credits from companies that run initiatives, for example, to suck in carbon from the atmosphere such as tree planting and reforestation, or to reduce the volume of it being emitted into the atmosphere by building more renewable energy.

Executive director of market analyst RepuTex Hugh Grossman said 95 per cent of the carbon credits that Australian companies are using to claim a net reduction to their greenhouse emissions are coming from international projects.

“That is a loss for the Australian carbon farming market and the indirect benefits of job creation, particularly in regional areas,” Mr Grossman said.

Both major parties are promoting economic opportunities from carbon offset projects under their climate policies.

The government said it would not impose rules that forced companies to reduce their emissions, favouring instead investment to lower the cost of clean technology to drive uptake across industry.

Labor has committed to set pollution limits on the 215 largest polluting facilities and to tighten them over time.

“What we’re seeing domestically is very high volumes of voluntary demand that’s coming from large corporates and increasingly from investors and speculators like the big four banks,” Mr Grossman said.

The Australian spot price for carbon credits is about $50 per tonne of carbon abatement but with cheaper labour costs overseas, credits can be bought for as low as $2 a tonne internationally.

“It’s a lot cheaper to buy good quality projects out of different parts of Asia than it is in the Australian market. Purely from an economic point of view, if a company is looking to offset, it saves money,” Mr O’Brien said.

Federal Energy and Emissions Reduction Minister Angus Taylor has established the Climate Active certification scheme, whereby companies can register their domestic and international credits and get certified if they achieve carbon neutrality.

Companies are required to use at least 20 per cent domestic carbon credits from land-based projects such as tree planting or agriculture.

Mr Grossman said companies were increasing their take-up of Australian carbon credits, which have risen in price from $15 a tonne to $50 over the past year. However, many investors aren’t surrendering their carbon credits to regulators to offset their emissions, opting to hold on to them in the hope of price spikes, or in case future government reform requires them to be used.

“Many large corporates are stockpiling these Australian Carbon Credit Units (ACCU) in advance of future regulation to ensure that they’ve got a pipeline of supply, if policy changes. They’re also viewing ACCUs as a low carbon investment opportunity,” Mr Grossman said.

Many climate campaigners are opposed to the use of carbon offsets, arguing they enable polluting industries to carry on with business as usual, without switching to more sustainable operations.

Got fine hair? These are the best 11 products to add volume and texture