The national president of the powerful Pharmacy Guild has described the Australian health system as stuffed and called GPs twits for allowing their sector to be commercialised.

In a candid speech to students, Professor Trent Twomey also called for pharmacists to play a greater role as governments seek to overhaul Medicare, and said it was insulting that some stakeholders only wanted pharmacists to prescribe with a medical practitioner looking over their shoulder. 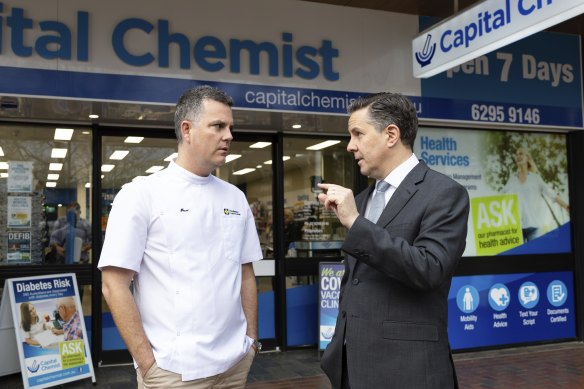 His comments to the National Australian Pharmacy Students’ Association Congress in Canberra this week, which were reported by The Australian Journal of Pharmacy, have inflamed the turf war between doctors and pharmacists.

The stoush promises to escalate as state and federal governments consider broad reforms to the health system to deal with the increasing strain on hospitals and declining rates of bulk-billing by GPs.

Victorian Premier Daniel Andrews and NSW Premier Dominic Perrottet are calling on the federal government to increase GP Medicare rebates and improve access to bulk-billing. But the state governments are also considering giving pharmacists more power to prescribe basic medicines without patients needing to see a doctor to take pressure off GPs and state emergency departments.

Trials in Queensland and NSW have already paved the way for pharmacists to prescribe for urinary tract infections. Twomey, who lobbied for the change, has previously called for pharmacists to treat colds and skin infections and issue prescriptions for the contraceptive pill, blood pressure and cholesterol tablets.

The move has been criticised by the Australian Medical Association and the Royal Australian College of General Practitioners, which argue it is dangerous to allow pharmacists to prescribe drugs directly to patients, arguing they may have a conflict of interest.

In his comments this week, Twomey said: “We do not support, at the Pharmacy Guild of Australia, being able to only prescribe if someone else is looking over my shoulder … You don’t see a plumber needing to look over the shoulder of an electrician before they put in your air conditioner.”

However, he said the COVID-19 pandemic – during which pharmacists helped with the vaccine rollout – had shifted power and made decision-makers more likely to listen to the guild’s proposals to improve the health system. The Pharmacy Guild represents about 5900 community pharmacy owners.

Twomey told students “the health system is stuffed” but cautioned that raising the Medicare rebate for GPs was not the answer. He referred to GPs as “you twits” when commenting on how the ownership of general practice had been increasingly commercialised.

“The point I’m saying is, the hospital system is under strain, and other elements of primary care are under strain … Money is not the solution to system reform,” he said.

Twomey said the only solution to Australia’s health crisis was “fully utilising all health practitioners to their full scope”. “Nurses, yes. Dentists, yes. Pharmacists as well,” he said.

The Royal Australian College of General Practitioners denounced Twomey’s comments on Friday, saying the Pharmacy Guild was out of control and its attitude “should send a shiver down the spine of politicians everywhere”.

“In this extraordinary speech, Trent Twomey has laid bare the guild’s future intentions for their sector and the future of healthcare in Australia. According to them, the limits on pharmacy prescribing should be done away with,” president Nicole Higgins said in a statement.

“It is all about exerting power and extending the role of pharmacy to maximise pharmacy-owner profits at any cost.

“Part of the skill of general practice is knowing when not to prescribe. The Pharmacy Guild seems to think that everything can be fixed with a drug. Pharmacists just don’t have the expertise and training to perform the function of prescribing medications – that is a job that should be left to medical practitioners.”

In turn, the guild accused Higgins of repurposing Twomey’s comments to whip up a media frenzy.

“The speech was described by attendees as unifying, inspiring and patient-centred,” a spokesman said.

“Professor Twomey stands by his speech and will always speak out in the best healthcare interests of patients, promoting safe and evidence-based healthcare.”

A federal taskforce on Medicare reform will finalise its report this month, which some taskforce members have flagged should focus on broad system overhaul.