BEL MOONEY: Can I now break free from my horrible marriage?

BEL MOONEY: Can I now break free from my horrible marriage?

How do you ask friends and family for advice when you’re hiding the reality of your circumstances?

At 19, l met someone I believed was the love of my life. I thought us happy but he cheated on me one night with his ex-girlfriend. Why didn’t I see the warning signs?

After some ‘hiccups’ we married and, at 21, I had our first child. He continued to cheat (one-night stands) which I vaguely knew — but chose to ignore.

He became violent when l challenged him about staying out until 3am. I have vivid memories of being held up against the wardrobe by my throat. I once tried to leave and went to my parents, but he came the next day and took my son while I was at work.

Things got worse. He had a seven-year affair (his ‘girlfriend’ came to our house) and told me about it when I was six months pregnant with our third child. I was devastated but had little choice but to stay.

She served him with papers because she claimed he had assaulted her when she tried to contact me with the truth. I ended up going to court to support him. He got off. Where was my head? He promised it would never happen again, then (around 2000), had a relationship with another girl. My son told me — but I vaguely knew. Why did I ignore my intuition?

He told me he would not lose that friendship and went to stay with his brother, but was back by the end of the night. At the time, I was receiving treatment for cervical cancer. Intermittently, through the years, he was still physically violent.

That’s the history. Now, for many months, I’ve been thinking how unhappy I am. I remember when I loved him but also recall the day I thought, ‘I don’t love you any more’. Why am I still here?

He is now 67 and impotent, so we have no physical contact and limited affection.

To the outside world we are this brilliant couple, married for 45 years with three lovely children. At 66, I recognise life is short. Do I get brave and make a new start, possibly meet someone who will make me happy, or continue with my current fraudulent life?

I have friends, but they are our friends — and to discuss this with them would not be loyal. Help! 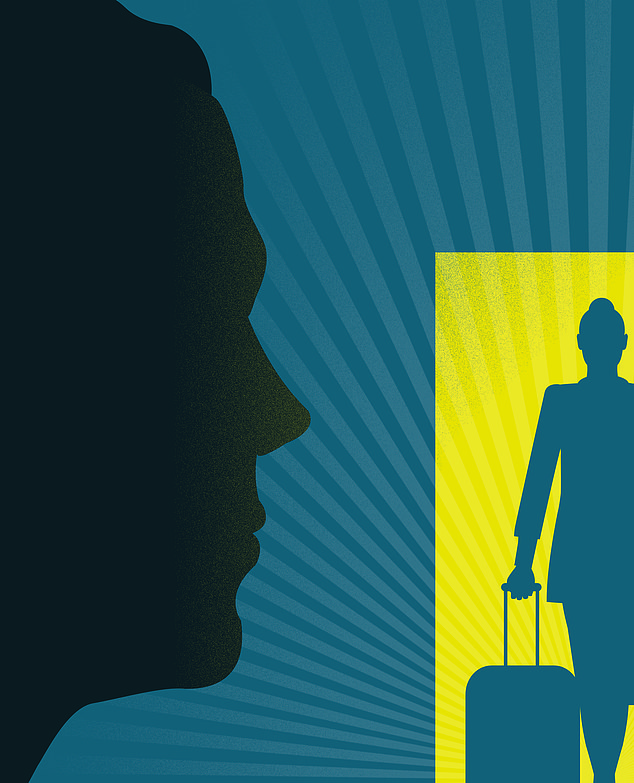 This week Bel advises a 66-year-old woman who wants to leave her husband of 45-years, who has been physically violent during their relationship

You are not the first reader to write and confess self-destructive stupidity — and you won’t be the last.

That judgement is not harsh, because you make it yourself, all the way through your problem letter.

All the disbelieving question marks here are yours, and readers of this page will agree with your mournful, exasperated question, ‘Where was my head?’

I must share something I edited — that for more than 20 years you have worked in social care and counselling and so (you say), ‘I probably ought to be able to sort myself out’.

Thought of the day

when it finally happens

how easy it is to feel

that love may be, could be, actually is

Before readers rush to agree, let me point out that most of us who think we know a lot about relationships will still make mistakes. Yes, you ‘should’ know better, but plenty of counsellors and therapists make terrible messes of their own lives. It’s all very well to say, ‘Physician, heal thyself’, but when somebody is overwhelmed by a problem, all the expertise in the world is unlike to help.

You know perfectly well that you have been extraordinarily foolish all through your married life and allowed your violent, unfaithful husband to get away with the most appalling treatment.

You turned a blind eye to multiple infidelities, went on having children with him and even protected him in court when you knew he had been violent towards his mistress. With all that history behind you, and your acute awareness of the part you yourself played in letting him get away with intolerable actions, why do you consider yourself possibly able to make a choice about the future now?

Even at the end of your letter you still express a protective loyalty to this man by saying you don’t want to expose him to friends in common.

Life certainly is short. Now your husband can’t skip off to frolic in strange beds, he will be all too aware of mortality — and probably expect his long-suffering wife to take care of him as he ages.

You no longer love him, yet you will fetch and carry and clean up after him because you are either saintly, or stupid, or too afraid (at this stage) to believe you can change your life.

Do your adult children know the full extent of the past ill-treatment? You might start by telling them the whole truth — and sharing the reality behind the facade with female friends, too. It’s time to be honest — and counselling might help.

You won’t be able to start a new life unless you make yourself independent of the old one. Stop this misplaced loyalty to the man who showed you none. Ask yourself whether you were spared the worst outcome of your cancer to go on living a miserable life.

I think I’m too honest to have friends

I’m 28 and always have problems making friendships last. It’s frustrating since I consider myself a good communicator.

I believe in expressing one’s needs, so people understand what is required of them. Yet many do not share this view.

Recently, I met a guy who I liked and got on with. He invited me to a rugby match he was playing in. I said sadly I had no interest in the sport but wished him luck with the game. Despite several attempts at contact, he’s chosen to not speak to me any more.

Another pal, who I thought I had a deep connection with, left because I gave him advice that he felt was unwanted.

Plus my best friend of eight years stopped contact after I criticised his choice of new partner.

In these cases, I was only being truthful. As a teacher I know that clear communication prevents problems. Or tasks will not be completed to my standards. This applies to all of my relationships.

Even when I get my hair cut, I make sure to show pictures of the style I want rather than leave it to the hairdresser, so I get my preference rather than being in the power of another’s designs.

I come from an independent family with everyone having their own interests, so I’m not a person who ‘needs’ others to survive. I’m OK being alone. I was taught to be self-reliant, otherwise people will walk over you.

Do you think instead of me being honest, it would be better to pretend to be someone I am not? Is that the best way to keep friends? I am at a loss.

Clearly, you are proud of being ‘a good communicator’ and you are correct that teachers must develop this skill.

The trouble is, your letter communicates things to me you may not mean to reveal. Take this sentence: ‘I believe in expressing one’s needs so people understand what is required of them.’

Let me now be your teacher and instruct you to read that through a few times, then think carefully about my alternative statement: ‘I believe in listening to the needs of others, so I can understand what is required of me.’

The best advice I can give you is that you switch your mindset right now to recognise where you are going wrong.

More from Bel Mooney for the Daily Mail…

Hair styles are one thing, but human relationships are not about ‘your preference’. If you’d gone to that rugby match you might have (a) had a surprisingly good time, (b) learnt something and (c) formed a new relationship.

If you had stowed your opinions about that friend’s new partner, he would not have cut off contact. You need to understand there are many occasions when you have to keep quiet about what you think, because nobody wants to know.

‘Only being truthful’ translates as ‘arrogantly being so indifferent to the feelings of others that I spout hurtful things, then make myself the good guy by claiming the virtue of honesty’. It isn’t wise.

The solution is not ‘to lie and pretend to be someone I am not’ but for you to recognise your own faults and learn how to be a different sort of person.

At 28, you are young enough to change. You seem to think being tactful with others is a form of weakness which will allow them ‘to walk all over you’. No! To consider the feelings of others is to be strong, constantly flexing that most valuable of ‘muscles’ called empathy.

This is realising that if you hold out generous, open hands to other people (instead of wrapping them selfishly and protectively around yourself), those others are likely to take your offered hands gladly — and pull you close.

I wonder if you ever teach your pupils the word origins I find fascinating. One vital to our little chat is ‘tact’. It comes from the Latin, tactus, meaning ‘a sense of touch’ and also, ‘handling, effect, influence.’ And tactilis means, ‘can be touched’. Do you see how accurate it was that I mentioned hands?

If you want others to reach out and be your friend, you must reach out to them, with their feelings uppermost in your mind. Imagine your words are gentle, encouraging strokes, rather than sledgehammers. And reflect on another Latin word: taceo. It means, ‘I stay quiet.’

Doing time has a lot of positives!

Last Saturday, we went to a very jolly golden wedding in London. How joyful to see the fine, celebrating couple’s three adult daughters, who I first loved when they were tiny.

How wonderful to see their eight children, too. How special to share so many memories —then dance at midnight to Stayin’ Alive!

Names are changed to protect identities.

Bel reads all letters but regrets she cannot enter into personal correspondence.

I’m bound to be thinking about past, present and future because here I am (on yet another birthday today) wondering where the time went.

It’s important to remember that the happiest photographs in the album can’t alter the fact that we still all had problems — just as now I can feel grateful for contentment yet still wake up many mornings feeling teary and anxious about other people. Life is never simple.

As for the future (which seems to rattle towards me at increasing speed), I’d be lying if I chirped, ‘Age is just a number,’ or any other of those platitudes spouted to veil reality.

Growing older can be depressing and painful. That’s why I give thanks for home hair colour, face cream and my nightly vodka and tonic, all to keep me going. And work, of course.

Two days after the golden wedding bash, we met three forty-ish parents we know, having coffee. One of the three is divorced, one separated and the third about to be. When told why we’d been in London, they shook heads and murmured incredulously, ‘Fifty years? That sounds like a long time.’

But do they imagine couples such as our golden wedding friends had perfect lives? That they were never driven bonkers by their spouses and made furious by their failings nor never briefly fancied a sexy new partner? Of course not.

But hell, they went on trying. So I’ll raise a glass to ‘doing time’ with somebody dear — until the time runs out.