Follow
Home » Lifestyle » Ben Lawson: why I penned the poem To My Country

Ben Lawson: why I penned the poem To My Country

My maternal nanna, Vivienne, lived at Wavell Heights, about a 15-minute drive from us in Carseldine, in Brisbane’s north. She knew what all my aunts, uncles and cousins were up to: she was our Nanna Gossip Mill. I felt close to her because she always knew what I was doing. 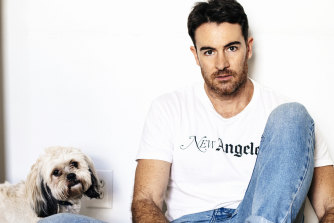 Ben Lawson: “I refer to Australia as “she”, as she provides for us the same way a mother would. It would be nice if we respected her in that same way.”

When I got my driver’s licence, I’d drop in and have tea and biccies. I knew it wasn’t something I could do forever, so I did it as much as I could.

She died in 2008, about two months after I’d moved to LA. I flew back for her funeral. I read a poem, but I was so choked up, it was hard to complete.

My mum, Dianne, met my dad, Peter, a GP, on a flight to Townsville, as she was an Ansett flight attendant. When he went into private practice, Mum became his secretary. She’d take my two younger brothers and me to work with her.

My parents divorced when I was seven. Two years later, Mum married my stepdad, Richard, the most decent man you’d meet.

Mum is a games champion. We are a games family. We even customised our own Cards Against Humanity deck so the questions relate to family jokes. When we play, we play to beat Mum.

Mum said my first kiss was at kindergarten. I’d been caught at the side of the sports shed kissing Jacqui Cuthbert.

I met my first serious girlfriend, Melissa, at a Brisbane restaurant where we both worked. I’d been kicked out of the University of Southern Queensland; she was earning money prior to an article clerkship at a London law firm. Even though Melissa had a boyfriend, I fell completely in love with her.

When she left, we emailed for eight months. Eventually I said, “If I came over could I see or stay with you?” She said yes, and I flew over. Immediately, I told her I loved her. I stayed for four months.

I returned and was accepted into NIDA. We saw each other when she came back, but it was obvious it was over. Weirdly, I still email her on her birthday each year. She has a couple of little kids now. Melissa is great.

I played Lachlan Murdoch in the 2019 film, Bombshell. The most arresting thing about my co-star Margot Robbie is that she’s so unaffected by her fame. I don’t know her well, but whenever we meet I feel like I’m just chatting to a chick from the Gold Coast.

On my first day shooting Dolly Parton’s Heartstrings, I was in an accent lesson when Dolly walked into the room. It was like meeting the queen. I’ve been at dinners with her since, and at a point in the evening she goes around the table and gives people hugs and asks them how they are doing. She then sits down and everyone begs for a story, like when she came third in a Dolly lookalike contest. She is so sweet, she is an angel.

My last relationship was with Maile. She is from Hawaii, but we met in 2016 in Portland, Oregon, where I was shooting the TV show Grimm. When her landlord sold her place, she moved in with me in LA, but we broke up in 2019.

Maile is one of the smartest and kindest people I know. We talk all the time. She’ll always be the “mother” to my dog, Mochi. I’ve hung out with her and her new boyfriend.

When I first moved to LA, I found the dating scene horrible. My jokes died on dates – they didn’t get my humour. I don’t date that much. I’m not scared of commitment, I’m just happy by myself.

I wrote the poem To My Country as I watched the Black Summer bushfires burn. It’s now an illustrated book. I refer to Australia as “she”, as she provides for us the same way a mother would. It would be nice if we respected her in that same way.

This article appears in Sunday Life magazine within the Sun-Herald and the Sunday Age on sale January 24. To read more from Sunday Life, visit The Sydney Morning Herald and The Age.

The life-saving trick every pregnant driver should know

DAN HODGES: We must have grown-up debate about Covid, culture and race

Britney Spears' Boyfriend Sam Asghari Says He's Ready For 'Next Step' in Relationship: 'I Want To Be a Young Dad'