Ex-rivals Jay-Z and Nas collaborating on the same track wasn’t the only surprise that DJ Khaled’s new song, ‘SORRY NOT SORRY,’ brought. If you listen closely, Beyoncé is also on the track!

Hey to you too, Beyoncé! Her husband Jay-Z, 51, made a surprise move by linking up with his former rival Nas, 47, to rap on DJ Khaled‘s new track “SORRY NOT SORRY,” which was track No. 10 on his star-studded project Khaled Khaled that came out on April 30. But their unlikely partnership wasn’t the only surprise on the song: Beyoncé sings one word — “Hey” — after Jay-Z raps, “Sorry, that’s another B / Haters still ain’t recover from the other B, mm / That’s a double B, now that’s a treble B / Can’t forget ’bout the other B.” We see what the power couple did there.

But Beyoncé does more than say “hey.” She also lends her beautiful vocals to harmonize on “SORRY NOT SORRY,” which solves the mystery as to who Harmonies by The Hive is (one of the featured artists on the song, along with James Fauntleroy). While Beyoncé didn’t appear in the song’s accompanying music video, the video does address her surprising cameo: once she sings “Hey,” Jay-Z looks behind his shoulder.

Long before Pusha T versus Drake or Taylor Swift versus Katy Perry (or Taylor Swift versus Kanye West) were the biggest feuds in music, Jay Z and Nas’s rivalry were the definition of beef. The schism began in 1996, according to High Snobiety’s timeline of the feud, after Nas reportedly failed to show up to record verses for Jay’s “Bring It On,” off of Reasonable Doubt. Nas’ second album, It Was Written, starts with “The Message,” which contained the line “Lex with TV sets the minimum,” which was a shot at Hova (who made many references to the luxury brand on Reasonable Doubt.)

“I saw JAY-Z driving a Lexus with the TVs in them. I got rid of my Lexus at that point, and I was looking for the next best thing. It wasn’t a shot at Jay, but it was just saying that’s the minimum you gotta have,” Nas told Complex. “It’s not a shot at him but he inspired that line.” Jay seemingly shot back at Nas on “Where I’m From,” rapping, “I’m from where n—– pull your card, and argue all day about/Who’s the best MC’s, Biggie, Jay-Z, and Nas.” Some would claim that Roc-A-Fella artist/Jay-Z protégé Memphis Bleek was brought in to feud with Nas, but things went problematic when Nas dropped the “Stillmatic Freestyle.” Along with the unfortunate homophobic insults, Nas called out the “fake king of New York,” before rapping, “You show off, I count off when you sample my voice / I rule you, before, you used to rap like the Fu-Schnickens / Nas designed your Blueprint, who you kidding?” 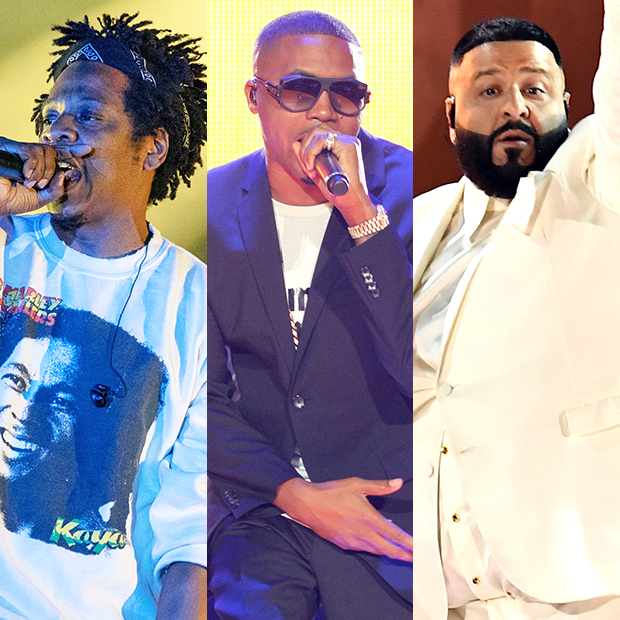 The pressure from Nas saw Jay respond with “Takeover,” first as a freestyle and then as a polished track on 2001’s The Blueprint. “That’s why your (lame!) career’s come to an end / it’s only so long fake thugs can pretend,” rapped Jay on the track. “ So yeah, I sampled your voice, you was using it wrong / You made it a hot line, I made it a hot song (Woo!).” It was considered a fatal blow – until Nas unleashed “Ether” off his 2001 album, Stillmatic. “I got this, locked since Nine-One (1991), I am the truest/ Name a rapper that I ain’t influenced,” he rapped. Nas would then insinuate that Jay copied his style and sold out. “Y’all n— deal with emotions like bitches/ What’s sad is I love you cause you’re my brother, you traded your soul for riches.”

Most gave the round to Nas, but Jay-Z fired back with “Supa Ugly,” which saw Jay brag about an alleged three-year affair with Nas’ girlfriend at the time, Carmen Bryan (Jay bragging about affairs seems odd in the post-Lemonade era, but these were the early 2000s.) Most listeners thought the response was weak, and Jay’s own mother called him and told him to apologize. “Mom put in a call and said, ‘That went too far.’ And she’s never, ever called me about music,” said Jay, per HipHopDX. “So I was like ‘Okay, okay, okay. I’ll go shut it down.’”

It got shut down – seemingly for good – in 2005. Jay and Nas buried the hatchet during Power 105.1’s Power House concert, per Billboard. Jay suggested that an earlier reunion between Diddy and rapper Lox/D-Block had inspired him, and he brought out Nas “to deafening applause.” The two stood next to each other for two minutes of cheers before launching into a fifteen-minute set that included “The World Is Yours,” “Street Dreams,” and more.

So, when are we getting the JAY-Z/Nas Verzuz?