Bride reveals she spent just £3,000 on her wedding

Savvy bride reveals she saved £12,000 on her wedding day – after spending just £3,000 by hosting the reception at her father’s house and wearing her grandmother’s dress

A savvy bride who wore her grandmother’s hand-me-down bridal gown spent just  £3,000 on her wedding day – and claims she’s saved enough for a house deposit.

Harriet Smith-Walker, from Tunbridge Wells, Kent, saved £12,000 by cutting costs on her delayed wedding day for 70 guests, which was postponed twice due to the Covid pandemic.

The 25-year-old, who was originally due to marry her husband Kieran, 28, in 2020, decided the original £15,000 budget they had set aside for their big day was far too extravagant, so the pair set off in search of ways to cut costs.

The couple, who’ve been together for six years finally married on 20 August, with Harriet beaming at how it all went. 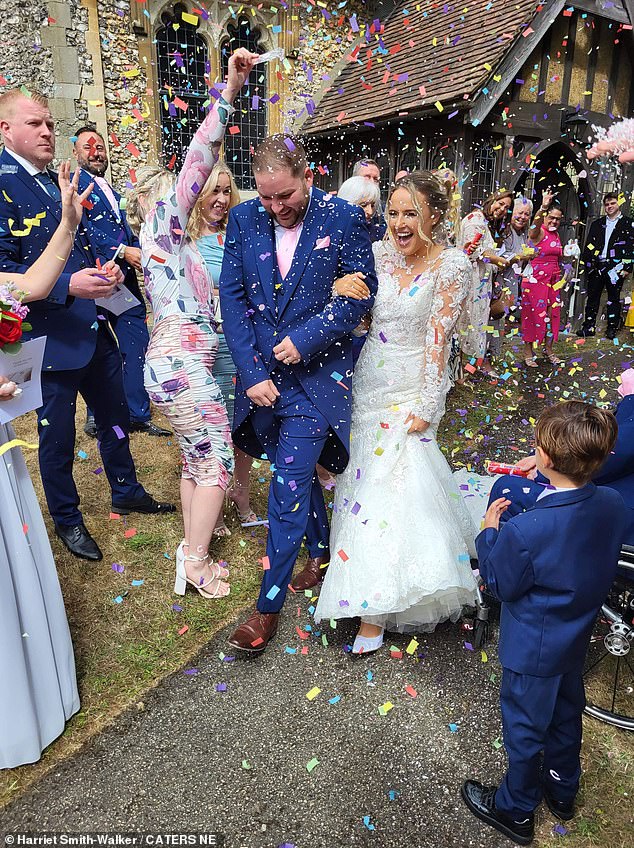 Harriet Smith-Walker, 25, from Tunbridge Wells, Kent, hosted her wedding reception in her father’s garden in Orpington on August 20th, for just around £3,000 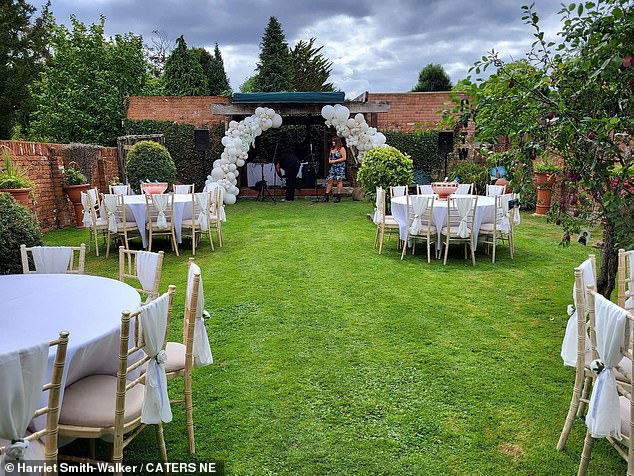 The bride and groom had their reception in her father’s garden in Orpington, and paid £260 for a balloon arch and £500 for two vocalists to entertain their guests

She said: ‘It was the best day of my life! I’m so happy about the wedding! It was such an amazing day and I loved every second of it, from start to finish.

‘After the first wedding was cancelled we were stuck deciding mortgage or marriage, but we wanted both.

‘It was going to cost us around £15,000. We decided that was far too much when we were looking to buy a home, so we decided to cut the entire wedding down.

‘We are now in the final stages of completion for the house and are looking to move in very soon!’ 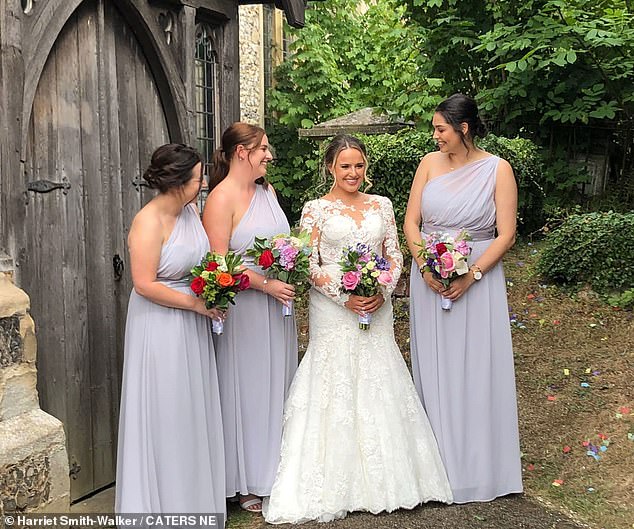 The blushing pride wearing her grandmother’s dress, with her handmade bouquet, and her bridesmaids 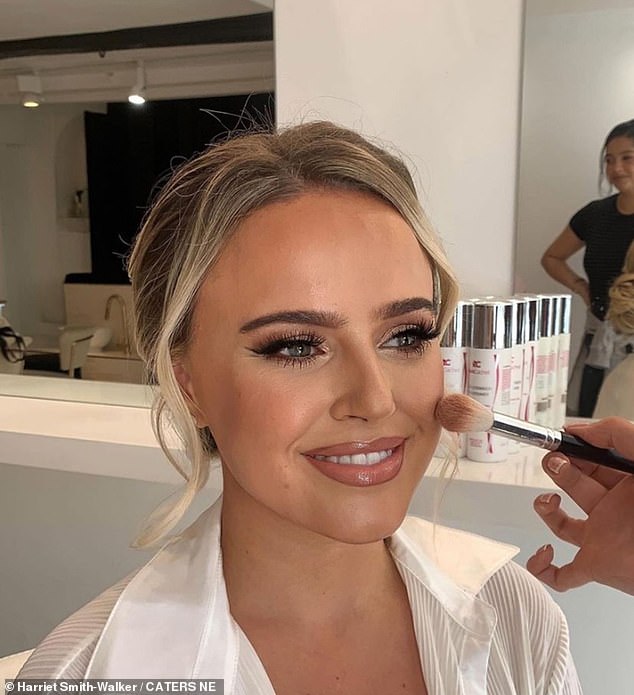 Glowing bride Harriet pictured getting the finishing touches to her makeup done on her big day. A friend did the bride’s makeup and hair 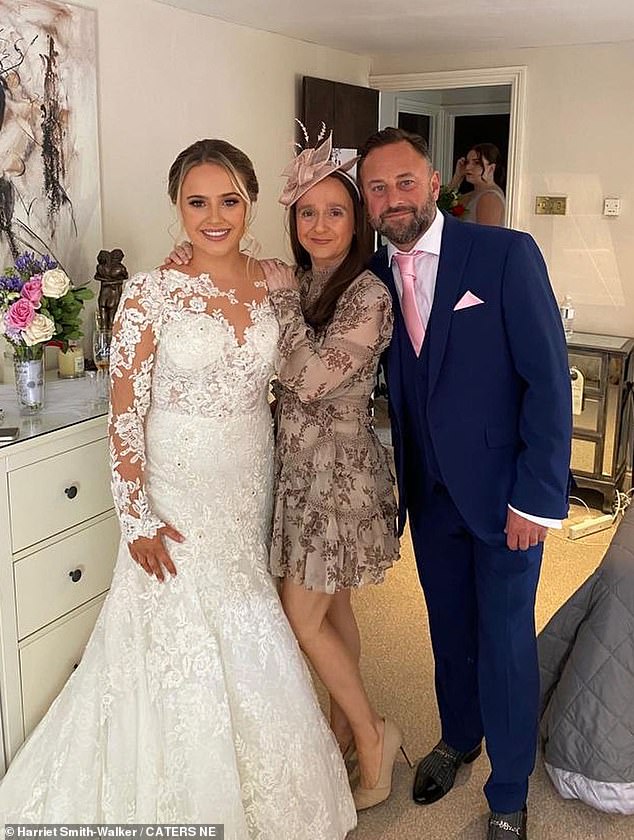 Harriet, pictured before going down the aisle with her mother, Collete, and her father Alan, who hosted the reception 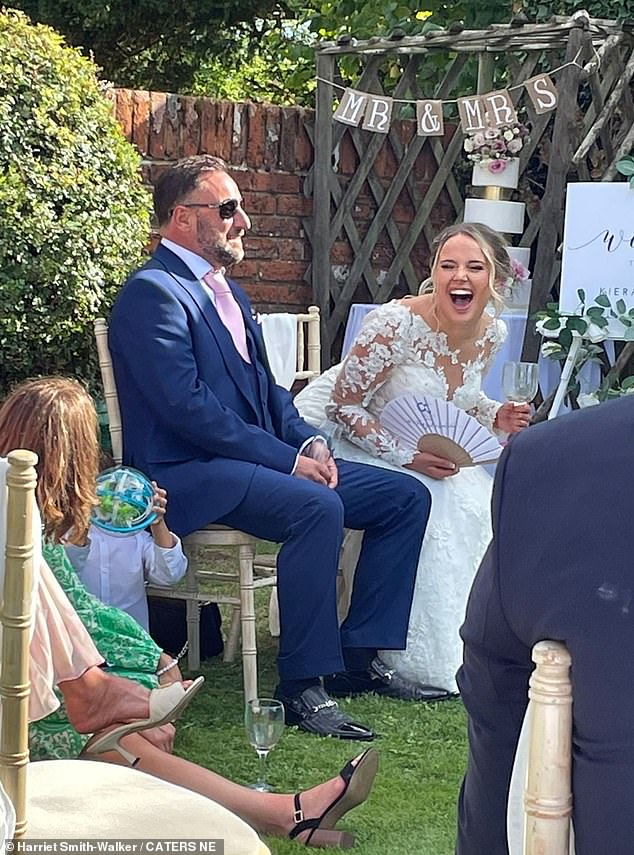 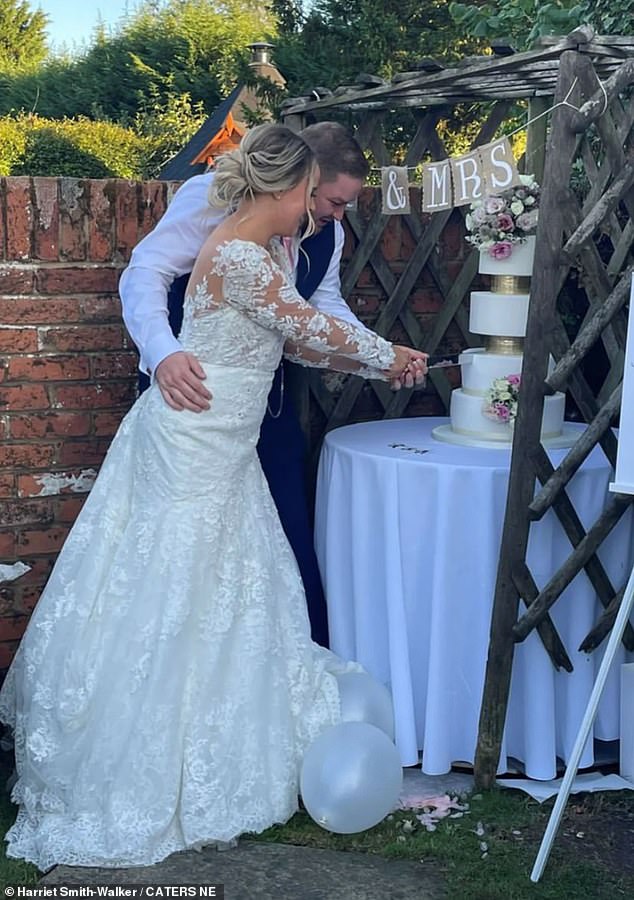 The couple bought a cake table and decorated it for £300. They also revealed they got their cake for free

The couple, who met in Magaluf six years ago, revealed their cost-saving tips but stated they still had the most perfect day celebrating their romance with family and friends.

– Dress: Hand-me-downs from her grandmother, worth £800

– Hair and makeup: done by a friend

Harriet said: ‘We got married in St Mary’s Church in Orpington, Bromley – this was one of the most expensive costs of the wedding, being around £500.

‘However, we got lucky as my dad only lives across the road, so we held the reception in his garden and decorated it ourselves.

‘We hired tables, a cake table, linen and other decorations for £300 and a balloon arch which cost £260.

‘For the bouquets we were quoted £75 just for one, so we made themselves ourselves and it was around £60 for four bouquets.’

Speaking about the dress, Harriet revealed she didn’t spend a penny on the dress: ‘My dress was worth £800 but this dress was actually my nans and handed down to me – she was so excited to see me wearing it!

‘In total I think we had around 70 guests so quite a lot for my dad’s garden, and quite a lot of people to feed and water!

‘The food at the wedding was a Jamaican BBQ and we sourced the meat such as a sausages and burgers with a cash and carry card.

‘That meant in total the food came to £262 and the side dishes such as potato salad and coleslaw were provided by family. Unbelievably, we won our cake too!

‘Booze-wise, we picked up any with damaged packaging which was reduced to clear from supermarkets, and with the amount of beer we got discounted it worked out at 47p a bottle!’

As for the music, Harriet ‘At the reception we were going to have a band play, which would have cost over a grand, but we opted for two vocalists instead, costing £500.

‘Our head usher was supposed to be the DJ on the night but he got stuck in Portugal so it meant we had to stick a playlist on instead!

As for capturing the wedding, Harriet said: ‘For our photographer and videographer we used trainees who were looking to enhance their portfolios.

‘This meant the photographer only cost £100 and the videographer didn’t charge us at all.’ 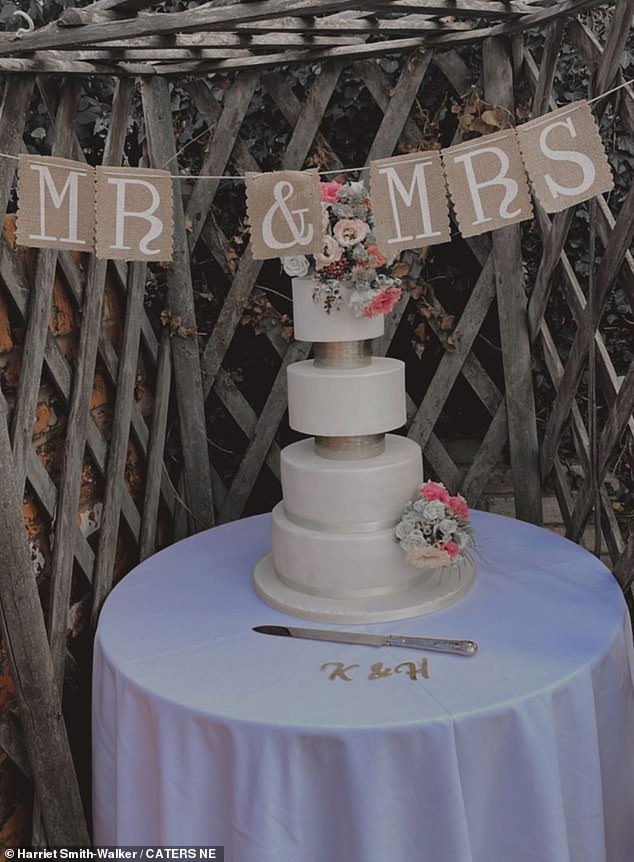 The cake was won by Harriet and her groom in a raffle-type competition, allowing them to cut on costs 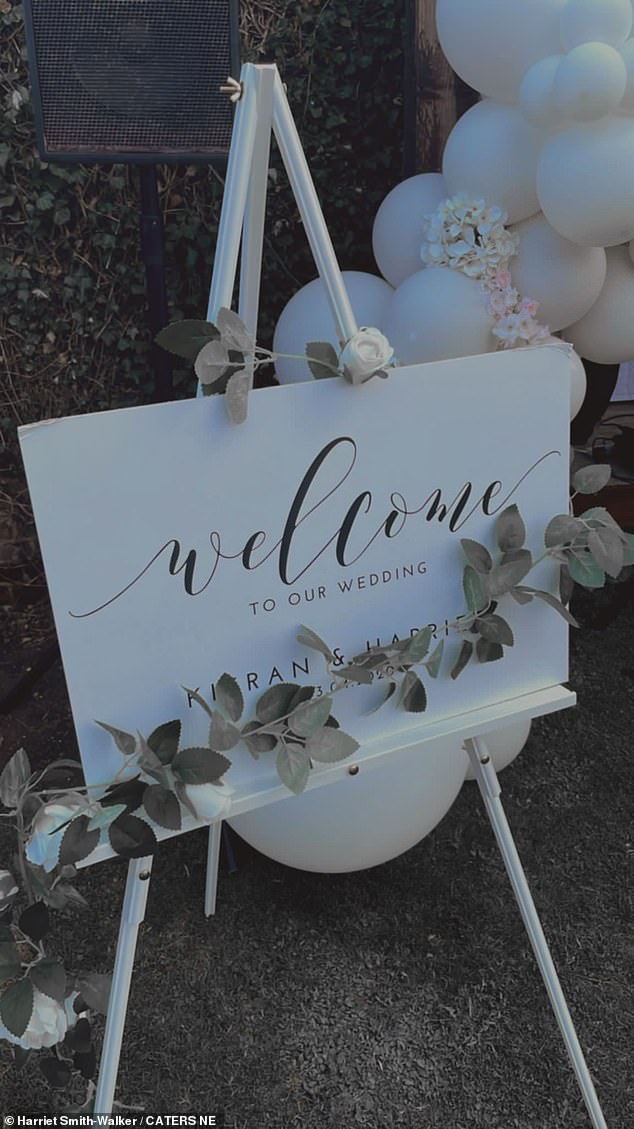 The couple tried to save costs where they could on food and decorations and managed to have a stylish wedding on a budget, having spent £300 on decorations