Lower than feared spending and better tax collections from corporate Australia have helped improve the federal budget by almost $5 billion in a single month but the Morrison government still faces a record fiscal shortfall.

Data from the Finance Department on Friday showed the budget deficit to the end of January was $133.9 billion, $14.5 billion better than had been forecast at the mid-year budget update in mid-December. 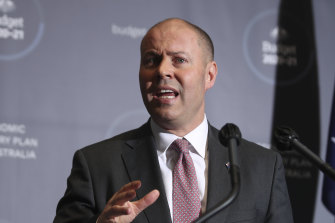 The budget had been expected to deteriorate by $22.9 billion through January. Instead, the deterioration was $17.9 billion.

The result was driven by total receipts being $5.4 billion ahead of forecasts while spending was $9 billion below expectations.

In a positive sign for the economy and the states, GST collections were $2 billion in front of forecasts.

While spending is well down on forecasts from the mid-year update, some of that improvement could disappear in coming months.

The government has so far spent just 38 per cent of the $6.9 billion it had forecast to invest in housing and community amenities while its expenditure on agriculture, fishing and forestry programs is at just 40 per cent of budget expectations. The government is forecasting to spend $230.5 billion on social security and welfare this year, its single largest expense. It had spent $137.2 billion by the end of January.

This does not include this week’s decision to increase the JobSeeker payment by $50 a fortnight, which is expected to add $9 billion to government spending over the next 3½ years.

While the budget is in better shape than feared, the Morrison government is still on track to record the largest deficit in Commonwealth history.

This year’s deficit is forecast to hit $197.7 billion before easing back to $108.5 billion for 2021-22. On the current trajectory, the government could end up with a deficit this year of less than $180 billion.

Finance Minister Simon Birmingham said the government would focus on the economic recovery and jobs growth as that would help improve the budget.

“Getting more people into work and continuing to grow the economy will be key to delivering a sustainable budget recovery,” he said.

“There will unquestionably be some challenges ahead but economic data is consistently showing how much better Australia is performing compared with comparable nations around the world,” he said.

The Reserve Bank board meets on Tuesday, with interest rates expected to remain at 0.1 per cent. On Wednesday, the December-quarter national accounts are expected by analysts to show strong economic growth through the final three months of 2020.

Bot, Budget, But, improve, numbers
You may also like:

Tom Utley: I'm not a parent who wishes they hadn't had children