The Business Council of Australia has called for a doubling of Australia’s efforts to slash carbon pollution over the next decade and unveiled a detailed plan to hit net zero emissions by mid-century while boosting the economy by $890 billion.

Amid delicate negotiations between the federal government’s Coalition partners ahead of next month’s crunch Glasgow climate summit, the lobby group representing businesses such as the major banks, Wesfarmers, BHP, Rio Tinto, Qantas and McDonald’s says Australia must lift its 2030 emissions reduction target to between 46 and 50 per cent below 2005 levels. It calls for a four-fold increase in renewable energy and a greater effort to embrace low-emissions technology throughout the economy. 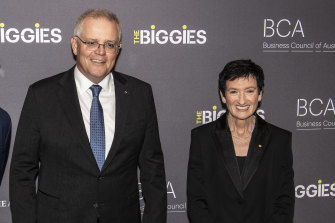 The council’s new report argues by accelerating emissions reduction and seizing the “first mover advantage”, average Australians would be $5000 a year better off by 2050, and those in the regions would gain the biggest economic benefit and the majority of almost 200,000 extra jobs by 2070.

“Preparing for the future means Australia must be more ambitious in the short term, and we can be because we’re already on track to meet our interim targets,” she said.

The Morrison government is edging closer towards formally adopting a target to hit net zero emissions by 2050 ahead of the United Nations Climate Summit next month and has been urged by its closest allies, the United States and Britain, to lift its 2030 targets from the 26-28 per cent that it adopted through the Paris accord.

The business-led push will coincide with a new campaign from media giant News Corp Australia, which is expected to bring its campaign endorsing net zero forward to next week. But environmental groups and progressive think-tank The Australian Institute argue any government commitment would be meaningless without urgently phasing out fossil fuels and 2050 is too late to hit net zero.

Ms Westacott said setting a more ambitious interim target now would drive new investment and bring forward action in sectors such as electricity where commercially viable technology can be deployed at scale.

“Of course not all sectors will be in a position to decarbonise at the same pace, and our plan allows for this by accelerating early action in sectors where commercially viable technology exists today,” she said.

To hit an increased 2030 target, the modelling shows the energy grid would carry the lion’s share of emissions reductions, with about 30 gigawatts of additional firmed renewable generation needed to be installed across the grid, including through gas peaking plants, battery storage and pumped hydro.

It also recommends governments make significant charging and network infrastructure investments required to support the shift towards electric and hydrogen-based vehicles, as well as more state-based incentives for uptake. Hitting the new target would require an increased penetration of light electric vehicles in 2030 to 22 per cent and at least 10 per cent of the truck fleet being hydrogen-fueled, the report found.

Australia’s major trading partners are reorientating their economies and shifting demand away from carbon-intensive imports. So far 14 of Australia’s largest 20 trading partners, including the US, Britain, Japan and South Korea, have committed to net zero, covering more than 70 per cent of the nation’s two-way trade and 83 per cent of its exports. The South Korean government on Friday announced it would lift its 2030 emissions reduction target from 26 per cent to 40 per cent.

The council – whose membership is made of chief executives of some of the biggest companies in Australia – said a coordinated pathway to net zero would create new industries, new jobs and ensure Australia remains competitive on the world stage.

It argued a transition must be underpinned by technology change and innovation, with the early years focused on bringing forward action in easier to abate industries while incentivising investment to close the technology gap in harder to abate sectors.

Nationals leader Barnaby Joyce, who is holding out on endorsing a net zero target, has cautioned that the government must keep “the confidence of our people” in any increase in its climate change ambitions, while Prime Minister Scott Morrison said this week that transitioning to a new energy economy must ensure that “the regions excel”.

Ms Westacott said formally committing to a net zero by 2050 target would also give certainty to industry to invest and urged the government to introduce 10-year carbon budgets with five-year reviews to provide predictability and a clear pathway to net zero.

“The best thing we can do for workers and for regional communities is to avoid playing costly and damaging catchup with a plan to prepare for inevitable change,” she said.

“Early action puts us in the box seat to take advantage of our world-class skills, abundant resources and proximity to markets to secure existing jobs and create new ones.”