Cabinet has been captured by Tory Left-wingers writes ANDREW PIERCE

Cabinet is captured by Tory Left-wingers: The takeover is all but complete as vision of low-tax Britain is now dead in the water, writes ANDREW PIERCE

Never one to miss a photo opportunity, Home Secretary Suella Braverman yesterday joined the National Crime Agency in a dawn raid on a people-smuggling ring.

Up at 4am to rendezvous with the police in Oxfordshire, Braverman told the TV crews that accompanied her they had made an important breakthrough in the fight against illegal Channel migrant crossings.

‘Today’s operation sends a clear message that we are committed to bringing to justice the criminal gangs behind these deadly journeys across the Channel,’ she said.

Barely six hours later, Braverman, 42, was unceremoniously despatched by the Prime Minister Liz Truss. The official reason was that she had blundered over the distribution of an official government document by using a private email account. In truth, it was a blazing 90-minute row between the Home Secretary and the Prime Minister on Tuesday night that lay at the heart of Braverman’s departure after just 43 full days in the job.

The clash was, yet again, over immigration. Braverman and Truss have been at odds over the issue for weeks. No 10 and the Treasury maintain that allowing in more workers from abroad is good for growth and are pushing for immigration rules to be relaxed to let in more, not fewer, migrants. 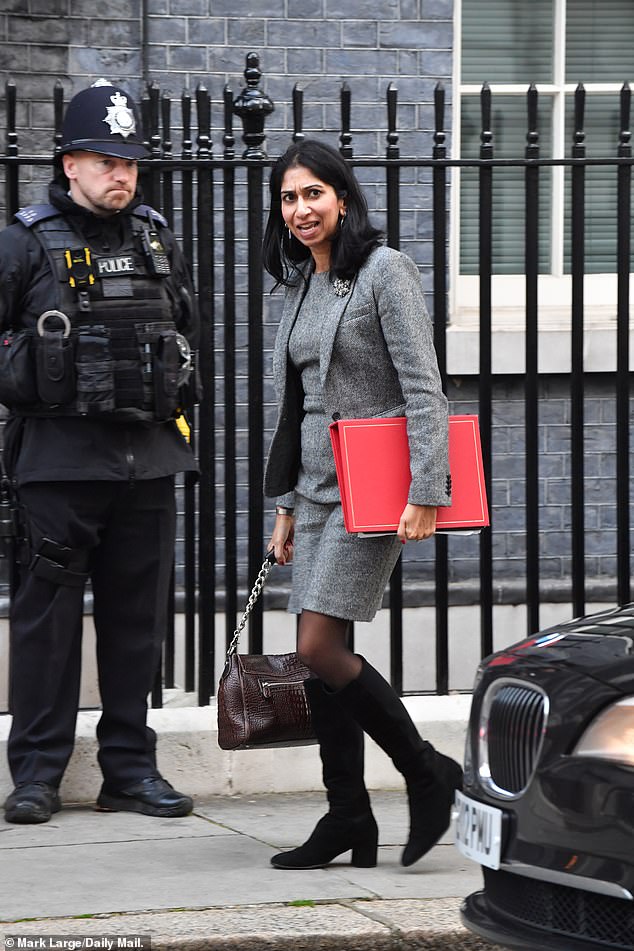 Suella Braverman quit tonight as Home Secretary and was replaced by Grant Shapps, meaning that three of the four great offices of state – including that of Prime Minister – are now held by ministers who voted Remain 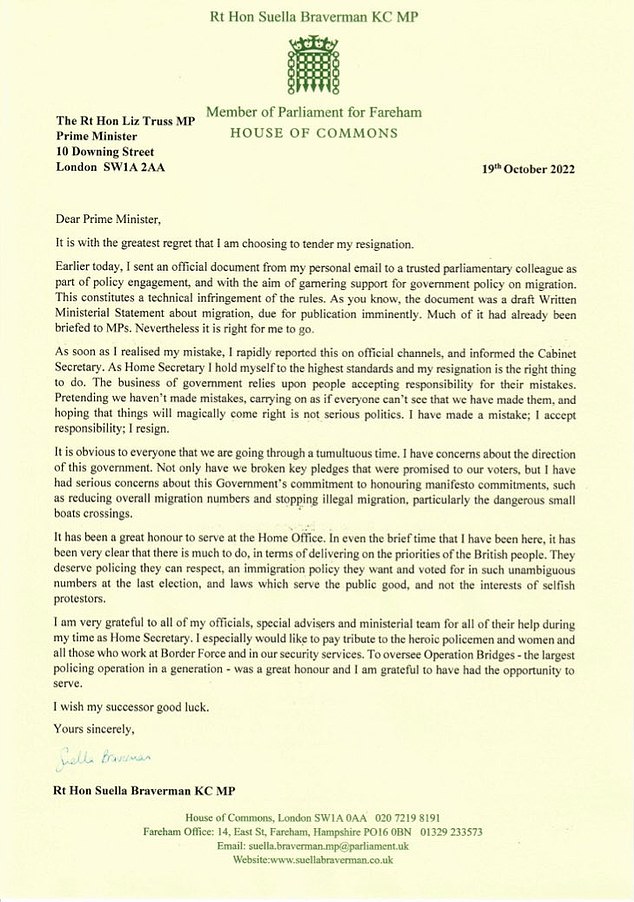 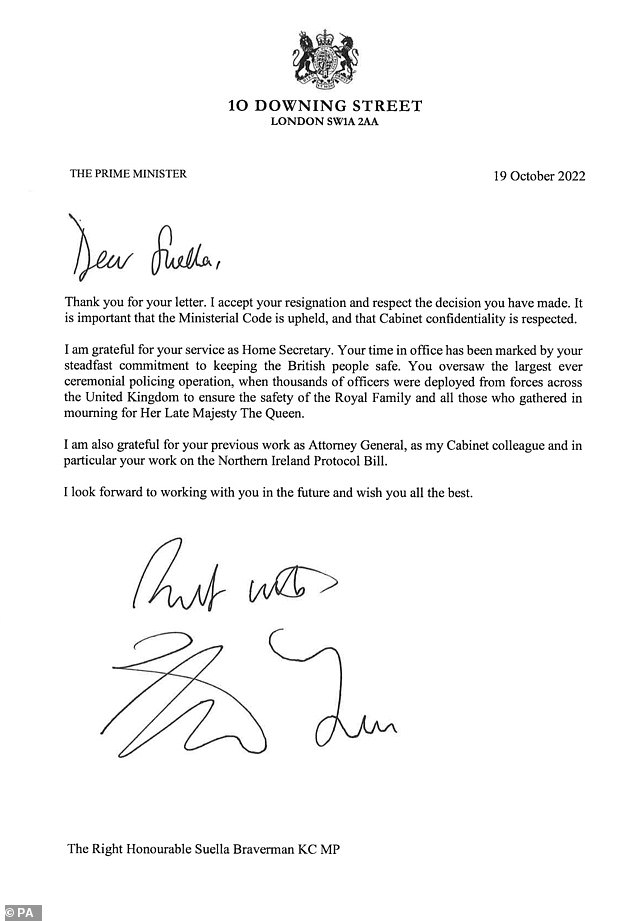 But the Home Secretary, a standard-bearer of the Right, expected the 2019 Conservative manifesto pledge – to rely on ‘far fewer low-skilled migrants’ to get ‘overall migration down’ – to be honoured.

And she was making energetic strides in that direction. While her predecessor Priti Patel was good at talking up the actions she was taking, she made little impact on the flow of migrants. On Braverman’s watch, however, 11 Albanians were fast-tracked straight from a processing centre in Kent to Stansted airport only last week.

Her exit means that the Cabinet has lost two of the Tories’ leading Brexiteers in the space of six days. And the fact that Braverman and the former Chancellor Kwasi Kwarteng have been replaced by ex-transport secretary Grant Shapps and ex-health secretary Jeremy Hunt means that three of the four great offices of state – including that of Prime Minister – are now held by ministers who voted Remain.

Hunt and Shapps both backed Rishi Sunak, the former chancellor, for the leadership and their elevation has dramatically shifted the balance of power in the Cabinet away from the Right-wing Tory MPs who backed Truss in the first place.

At the Conservative Party Conference the now former home secretary was criticised by Truss supporters for saying a ‘coup’ had taken place after it was announced that the cut in the 45p tax rate was being dropped. 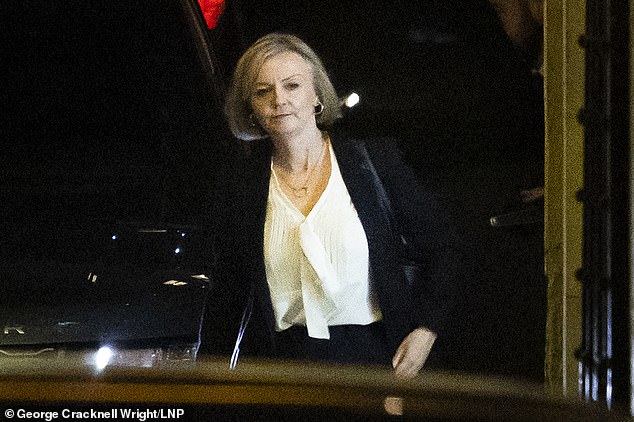 But in the days since Hunt was made Chancellor, Braverman has told friends that his appointment proves her assessment was right. And she is not alone in lamenting recent events. ‘These changes are setting back the cause of the Tory Right by 30 years,’ said one appalled former minister.

To her detractors Braverman was a shameless populist and they were appalled by her opportunism in launching her Tory leadership campaign on live TV even before Boris Johnson had resigned. Not that it did her much good: She was knocked out in the second round and then lined up behind Truss.

She was in feisty form on her final outing at the despatch box as home secretary on Tuesday, roundly mocking Opposition MPs for refusing to condemn the Stop Oil protesters: ‘I’m afraid it’s the Labour Party, it’s the Lib Dems, it’s the coalition of chaos, it’s the Guardian-reading, tofu-eating, wokerati – dare I say, the anti-growth coalition – that we have to thank for the disruption we are seeing on our roads today.’

Labour MPs jeered, some Tory MPs sneered, but much of what she said resonates not just with large sections of the electorate but also the Tory members who put Truss in No 10 and who are bewildered by the recent U-turns and what is becoming nothing less than a philosophical revolution in the Cabinet.

Her blistering resignation letter suggests that Braverman will not go quietly. But there is no doubt that with her departure, the truly Conservative low-tax renaissance we were promised just weeks ago, is now dead in the water.