‘Cafe manager gave me a dustpan and brush to clean up after my baby’: Mother is left outraged – but who do YOU think was in the right?

A mother has sparked a furious debate by questioning if cafe staff were reasonable to ask her to sweep up after her baby.

The woman said on British parenting forum Mumsnet she had taken her child to a ‘family friendly cafe’.

But as she was leaving, one member of staff bought her a dustpan and brush and asked her to sweep under her child’s high chair.

The post split opinions on the site, with some saying of course she should clean up the mess and others insisting the cafe worker was rude. 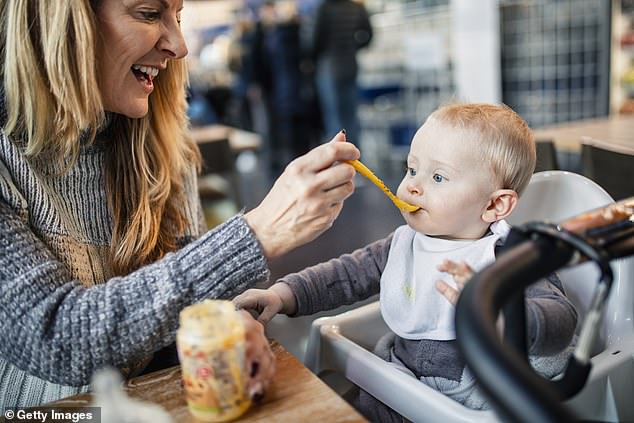 Babies routinely cause mess when they eat – but should you clean it up when you are out in a cafe? (stock image)

In her post, the woman said she and a group of friends go to a cafe each week.

She wrote that the previous week one of her friends had been told off by the  manager for not cleaning up her baby’s mess under its high chair.

And she said that – on a more recent occasion – when she was packing up to leave, she got handed a dustpan and brush to sweep up food that her child had dropped.

She added that if it had been an unreasonable amount of mess she would have of course cleaned up automatically.

Yet she explained that it was just a few bits on the floor.

She then relayed the story to her mother, who was appalled by the cafe and encouraged her to leave a negative review.

But she was ‘torn’ over the situation and so sought counsel from Mumsnet users. 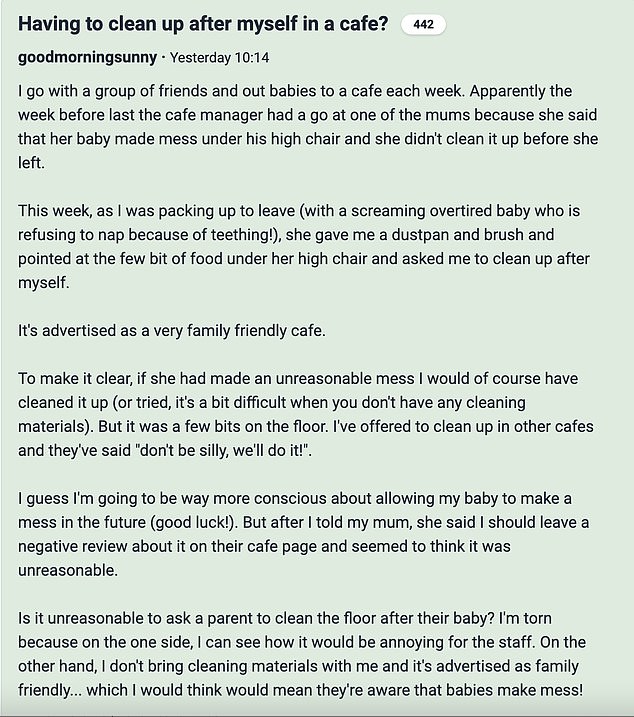 Most mothers were very critical of her for not cleaning up the baby mess.

One wrote: ‘I’m shocked how often I see people walking out leaving mess all over the floor.

‘If an adult dropped food they’d pick it up. So you should do that for your baby too.’

Another wrote:  ‘Many parents unfortunately do not clean up after children when out or let them run riot because the place is child friendly.’

A third wrote: ‘If I walked into a cafe and there was food on the floor, I’d walk out.

‘If the staff are busy and I’d caused the mess, I think it only right that I clean it up.’

Others implied that the cafe was probably trying to discourage the group of mothers from coming.

One wrote how the group probably stayed too long, made a mess and did not buy much, while another wrote that food on the floor was beyond the realms of ‘normal mess’.

A further user wrote: ‘They are obviously fed up of you and your friends leaving a mess.’

Another wrote how cafe staff were often on very low wages and were there to take orders, serve food, take payment and wipe down tables in between customers.

They wrote that waiters and waitresses should not have to do ‘mega-cleans’ which small children inevitably require after eating.

But there was a small amount of sympathy for the mother, with some saying the cafe was out of line.

One wrote: ‘It sounds they’ve got a bit of an attitude about it and I’d be taking my business elsewhere. Giving you a dustpan and brush?? Wtf!’

A second wrote: ‘It’s super off to be handed a dustpan and brush! But how much mess was there?’