A family held a gender reveal party for their eight-year-old daughter – after she told them she no longer wanted to live as a boy.

Ella Scott, now eight, from Ontario, Canada, told her parents that she didn’t feel like a boy inside two years ago, at the age of six.

Initially, her mother Nikki, 38, and dad Graham, 39, thought Ella might be going through a phase.

But then they realized she was serious – and held a gender reveal party to announce her journey to the extended family. 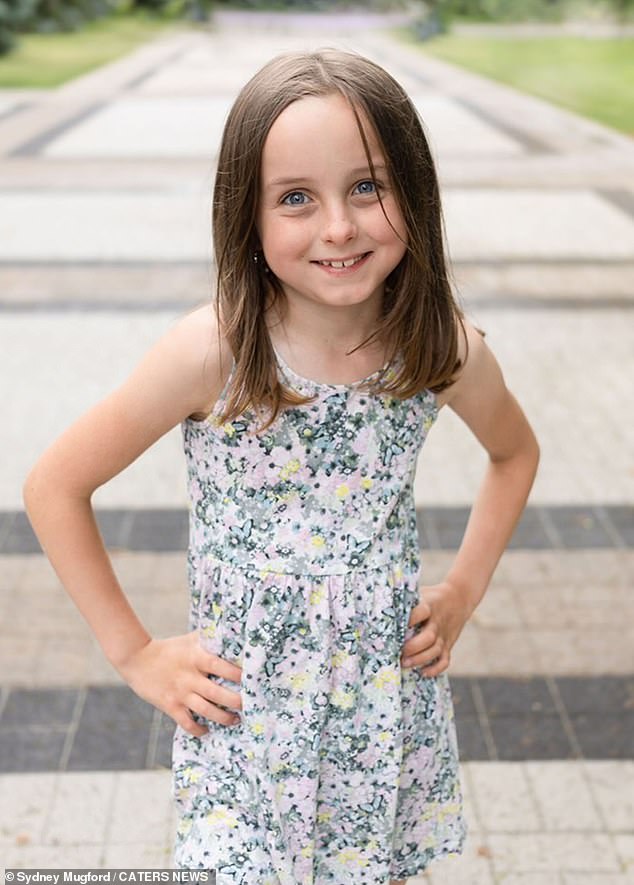 Ella Scott, now eight, from Ontario, Canada, told her parents that she didn’t feel like a boy inside two years ago, and is now happy in her new identity – which is embraced by her whole family and friendship group 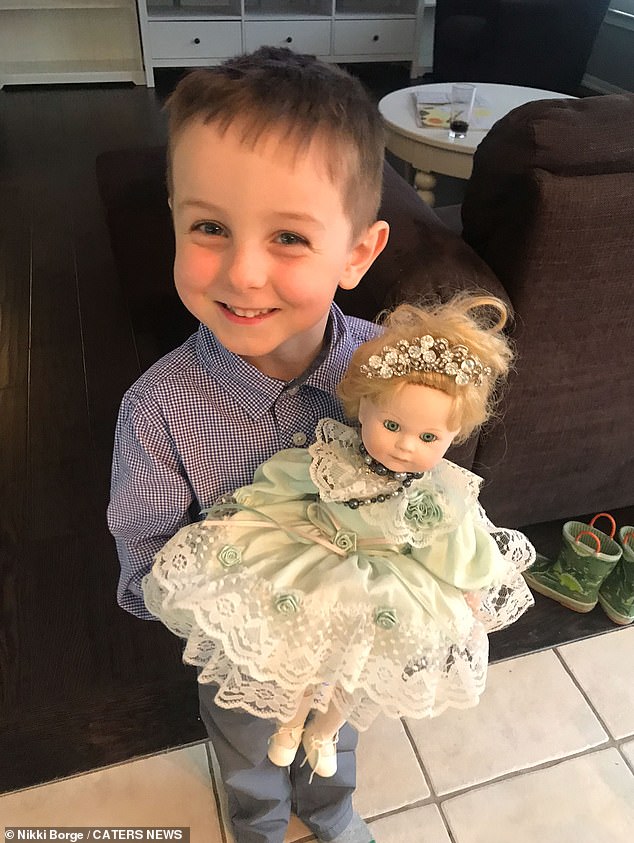 Ella Scott, pictured before her transition,  always preferred friendships with girls and playing with Frozen toys to rough and tumble with her brother 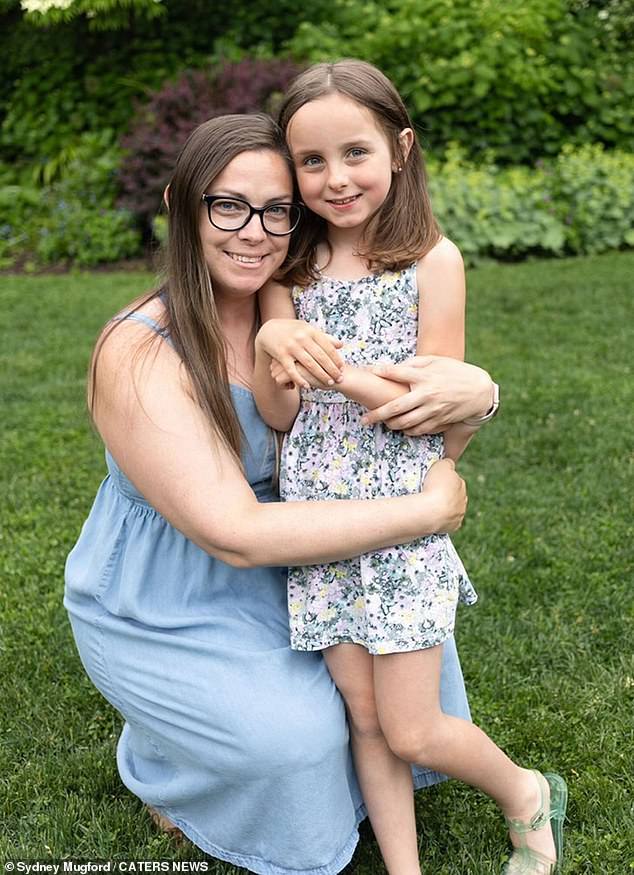 Nikki said, ‘With Ella it’s like she always knew but we just didn’t.

‘We always knew she was a little different, when she was little as she was always friends with girls and played with Frozen toys.

‘I have two other children, Ella’s brothers, who play rough but Ella never wanted to join in.’

Nikki said, ‘At age six she wanted to start wearing girls clothes like skirts and dresses.

‘I must admit I thought it might just be a phase.

‘One Halloween we decided to let Ella pick her own costume and she wanted to be a cat so she wore a skirt and cat ears.

‘Neither of us knew what the right thing to do was so we showed Ella books of trans people because she didn’t have the words to say it. 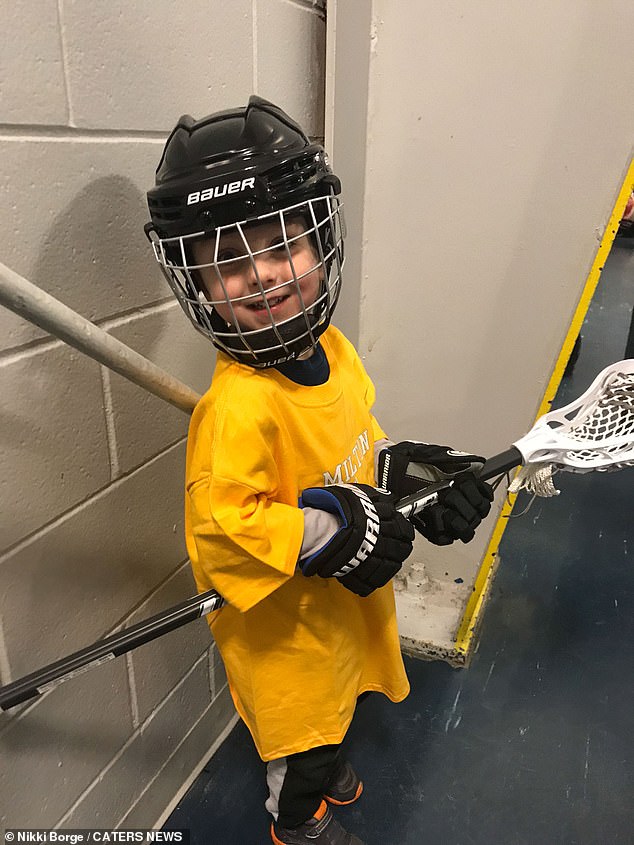 Ella prior to her transition, getting ready to play ice hockey. Her parents say she led the way on her own trans journey, with her parents Nikki, 38, and dad Graham, 39, following her lead 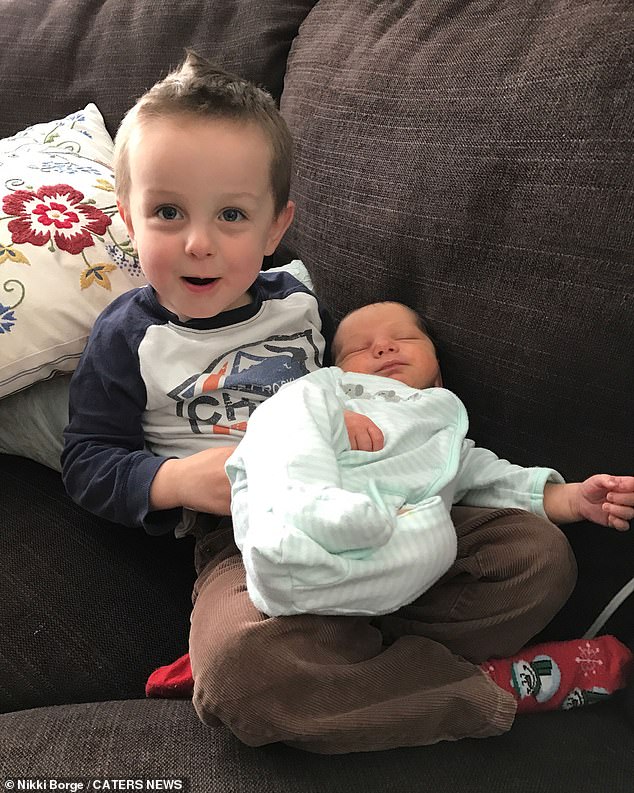 Nikki said she and her husband Graham were initially very confused over how to best treat their child.

‘We were asking ourselves if she was too young and were we doing the right thing,’ she explained.

‘We wanted to ensure what we were doing wasn’t harmful or damaging.’

The couple then arranged a consultation with a psychologist from their local child mental health centre Reach Out Centre for Kids.

They provided support to the parents, supporting them in letting Ella choose who she wanted to be.

Nikki added, ‘From here we let Ella take the lead.

‘Ella did get upset when her hair wasn’t growing fast, but apart from that she is a very happy girl with an upbeat character and has been throughout her journey.’ 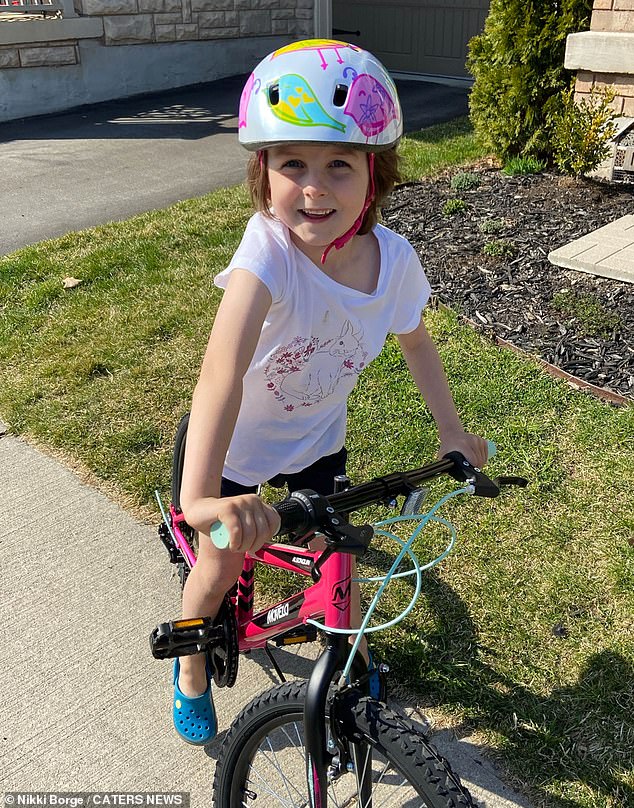 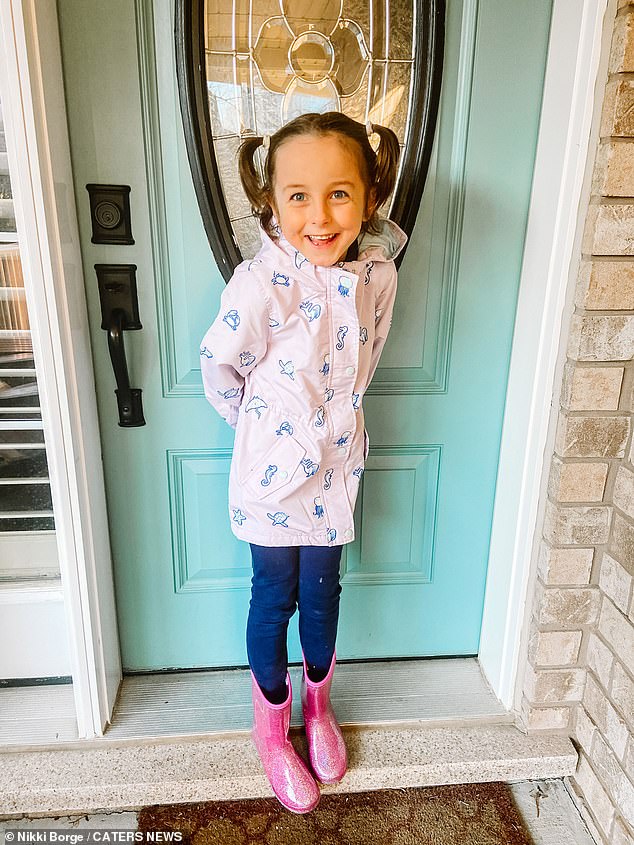 The couple, along with Ella’s two younger brothers, Teddy, six, and Regan, five, then decided to support Ella by hosting a gender reveal party to announce her journey to their extended family.

And it was a success – with wider relatives being very supportive.

They have all now stopped referring to Ella’s old boy name, which her parents don’t want to be made public.

Nikki added, ‘Family gave her the most supporting and loving reaction as expected when she came out.

‘It’s her family, her home and that means her safe space.’

Despite being accepted by family and close friends, however, Ella did have to move school in order that she would be fully accepted in her new identity by her peers.

Nikki added, ‘Grade one was confusing because some peers were saying she wasn’t a girl.

‘However, we chose to move Ella and the rest of our kids.

‘Ella’s new school was a perfect place for her to explore who herself further and her teachers have been so supportive too.

‘She has a great group of friends around her as well.’ 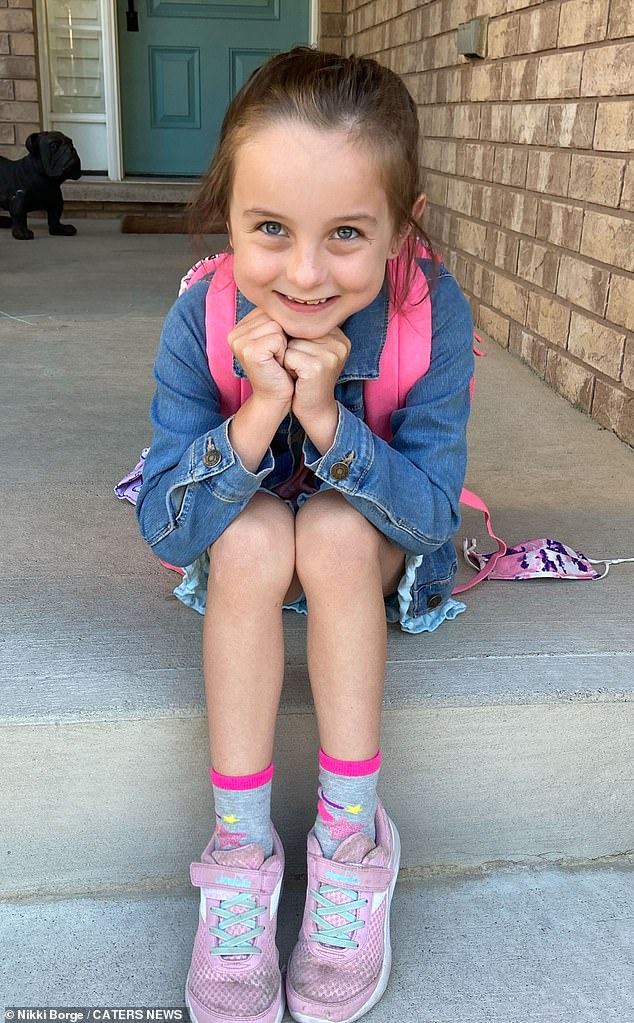 Initially Ella’s parents thought she might be going through a phase, before realising she was serious 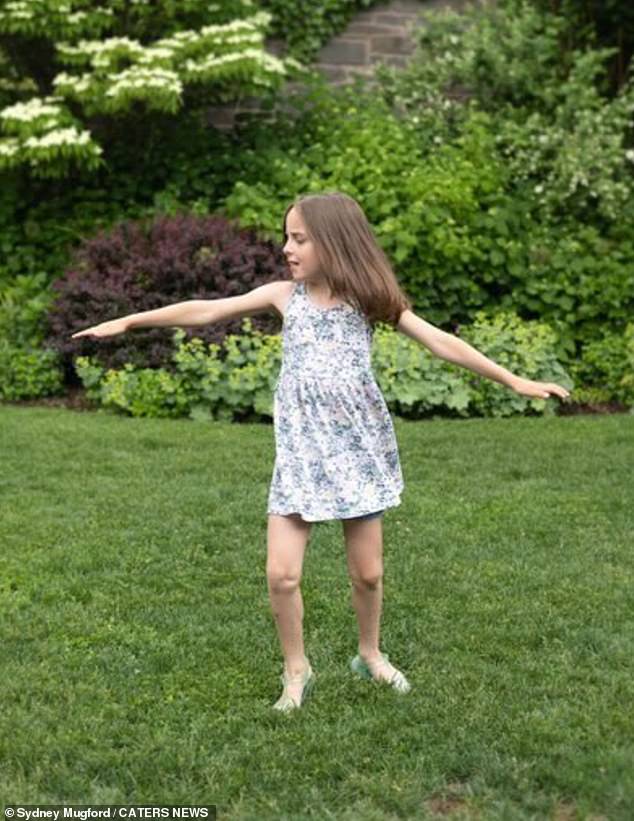 Girl power: Ella always knew she was a girl but for a long time her parents ‘didn’t see’ 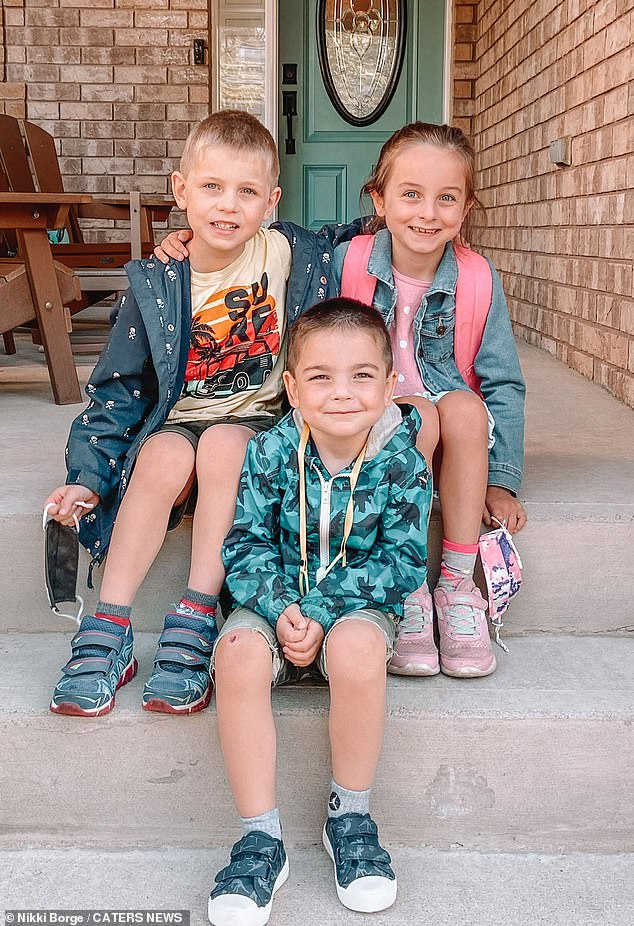 Nikki has now set up a page on Instagram documenting Ella’s transition journey.

She added, ‘When she transitioned I found loads of resources for youths but not for kids.

‘In most local clinics the rules are that you need to start puberty before you can get in and that means Ella wouldn’t qualify.

‘I want parents to feel they have a safe space because we didn’t have anyone else us to help at the start of our journey.

‘My page is to raise awareness of transgender kids and a supportive community for the parents.’