Follow
Home » Lifestyle » Can’t get to Splendour in the Grass? Buy a ticket for your virtual self

Can’t get to Splendour in the Grass? Buy a ticket for your virtual self

Remember Second Life? Ah, those were the days. Flying around a glitchy virtual game-scape making small talk with other aimless avatars in the guise of an ambisexual purple bunny creature. OK, maybe that was just me.

Way back in 2008, U2 played a concert in Second Life. Come on, you remember U2. They used to be the future. So did Second Life. Never mind. All prehistory in the nascent metaverse now.

The metaverse? It’s a sci-fi concept of a totally immersive digital virtual reality as spectacularly rendered, for example, in the Steven Spielberg movie Ready Player One. Silicon Valley is racing to get there, though the closest destination in 2021 might be Fortnite, the hugely popular video game that looks a bit like, well, Second Life. 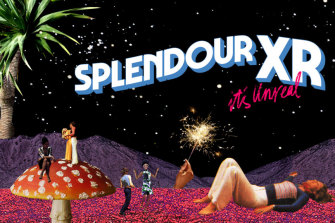 If you’re confused by all this, you’re probably not in the demographic crossing fingers and toes that Splendour in the Grass will happen as scheduled in Byron Bay in November. Meanwhile, the imperilled real-life music festival has announced a stay-at-home virtual precursor, Splendour XR, preparing to suspend disbelief in July.

The promo video for the “world-first extended reality edition” of the festival shows a sparse gaggle of good-lookin’ avatars meandering around a cartoonish replica of the actual Splendour site with giant mushrooms and other psychedelic embellishments. For an early-bird $17.99 to a “party-pack” $79.99, one of them could be you.

Down there is a stage. When the Splendour XR weekend comes, you might see Chvrches there. Or The Killers, Denzel Curry, Tash Sultana, Phoebe Bridgers, Vera Blue or 50 other local and global acts during a real time window of 2pm to 2am, July 24 and 25.

Will these artists be performing in the same real time? No. “There are constraints around running live globally at one time,” is the word from Splendour. Tech-wise, this world is just not there yet.

Nor will you feel the ecstatic community of what might be a truly massive global turnout. Instead, expect the “same as Fortnite or other gaming platforms… 50 avatars per ‘scene’.”

This was the nagging disappointment of what was otherwise one of the music events of 2020. When a giant prepared avatar of rapper Travis Scott performed to a staggering 46 million people in Fortnite, all of us felt eerily disconnected from the big party.

The good news is that following on from Scott’s cosmic underwater battle sequence, some Splendour XR artists “are using cutting edge technology”. While “all sets will be prepared earlier … they will be never-before-seen live sets that have each been created especially for Splendour XR”.

Promoter Jessica Ducrou told Triple J that artists had been encouraged to “represent themselves in the way they want to, and they have more options than playing in a live space.” They might appear in greenscreen 3D (bring your VR goggles) or “record in a rehearsal studio, in a venue, bedroom, back of a truck…”

This is where this daring Australian world first might get interesting. The tsunami of digitally transmitted “live” concert events this past year has obviously been immensely important to the financial wellbeing of artists, and to the mental health of isolated fans. But nobody is pretending that remote concerts have replaced the physical community and visceral thrills that only real-world, flesh-and-blood gigs can provide.

In the same way, Splendour XR is clearly a brilliant survival move for a festival, and for 50-odd underemployed music acts all grappling with unprecedented uncertainty. But its larger success might be judged by how much closer it brings us to the kind of full-blown Philip K. Dick/ Steven Spielberg metaverse that might give artists a creative future.

The platform hosting Splendour XR, by the way, is the San Francisco-based “social virtual reality” party hub, Sansar. It was developed by Linden Lab, best known in turn for its still-active online world, Second Life. I wonder if my purple bunny is still good to boogie?