Cara Delevingne’s friends desperate for her to go to rehab: report

English model Cara Delevingne looked as beautiful and self-possessed as ever last week when she flew to Paris to kick off the new capsule collection she created with the late designer Karl Lagerfeld.

For one evening, at least.

Delevingne, 30, cleaned up well — and it was a relief to fans after she was a no-show at the launch of the Cara Loves Karl collection at New York Fashion Week on Sept. 13.

She looked like a different person than the disheveled young woman snapped by paparazzi at an LA airport earlier this month. She was seen walking around erratically in dirty socks after reportedly boarding a private jet belonging to Jay Z and then abruptly disembarking 45 minutes later.

In Paris, Delevingne was back to her customary elegant insouciance, posing in a black blazer dress with a plunging neckline, thigh-high black boots and statement scarlet lipstick.

But pictures are deceiving. Delevingne flew to Paris with her publicist, Katie Greenthal, part of an entourage that she often references on social media. “I would be NOTHING without my team and the people that support me and make my dreams come alive. Yes team!!!! Thank you for being continually creative, inspiring and supportive throughout. There is a lot more magic to come,” Delevingne once wrote on her Instagram account.

Lately though, her team hasn’t been able to steady her. Some insiders told The Post that Delevingne’s appearance in Paris belied an ongoing substance abuse issue. Delevingne has confessed to dabbling with drugs in the past, but not confirmed if she is currently battling an addiction.

“A doctor friend told me they’re planning to stage an intervention,” a London-based fashion and modeling insider told The Post. “Everyone knows her mother abused substances for years. Her mother is lucky to be alive. Cara spent her whole life being around drugs. She comes from a very troubled family.” 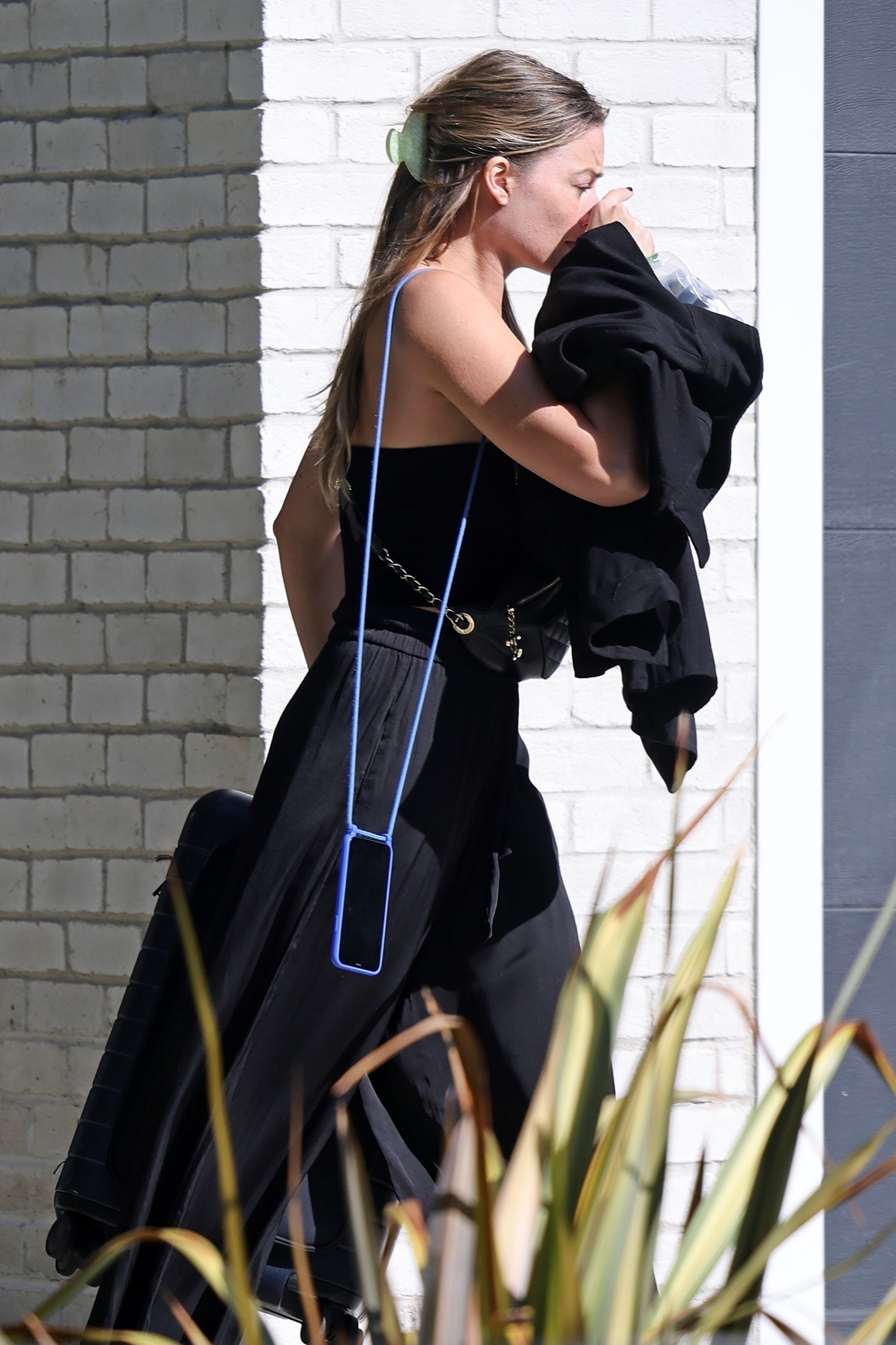 Her recent downward spiral, which echoes the painful trials of her mother, Pandora Delevingne, 63, a former heroin addict who was diagnosed as bipolar and struggled with drug abuse during Cara’s childhood, can be traced back to March, when she “seemed really drunk” at a party with Wyclef Jean in New York.

In May she raised eyebrows when she bizarrely trolled Megan Thee Stallion on the red carpet at the Billboard Music Awards, tossing the hip hop star’s train dramatically in the air and later photobombing her after the singer won Top Rap Female Artist. 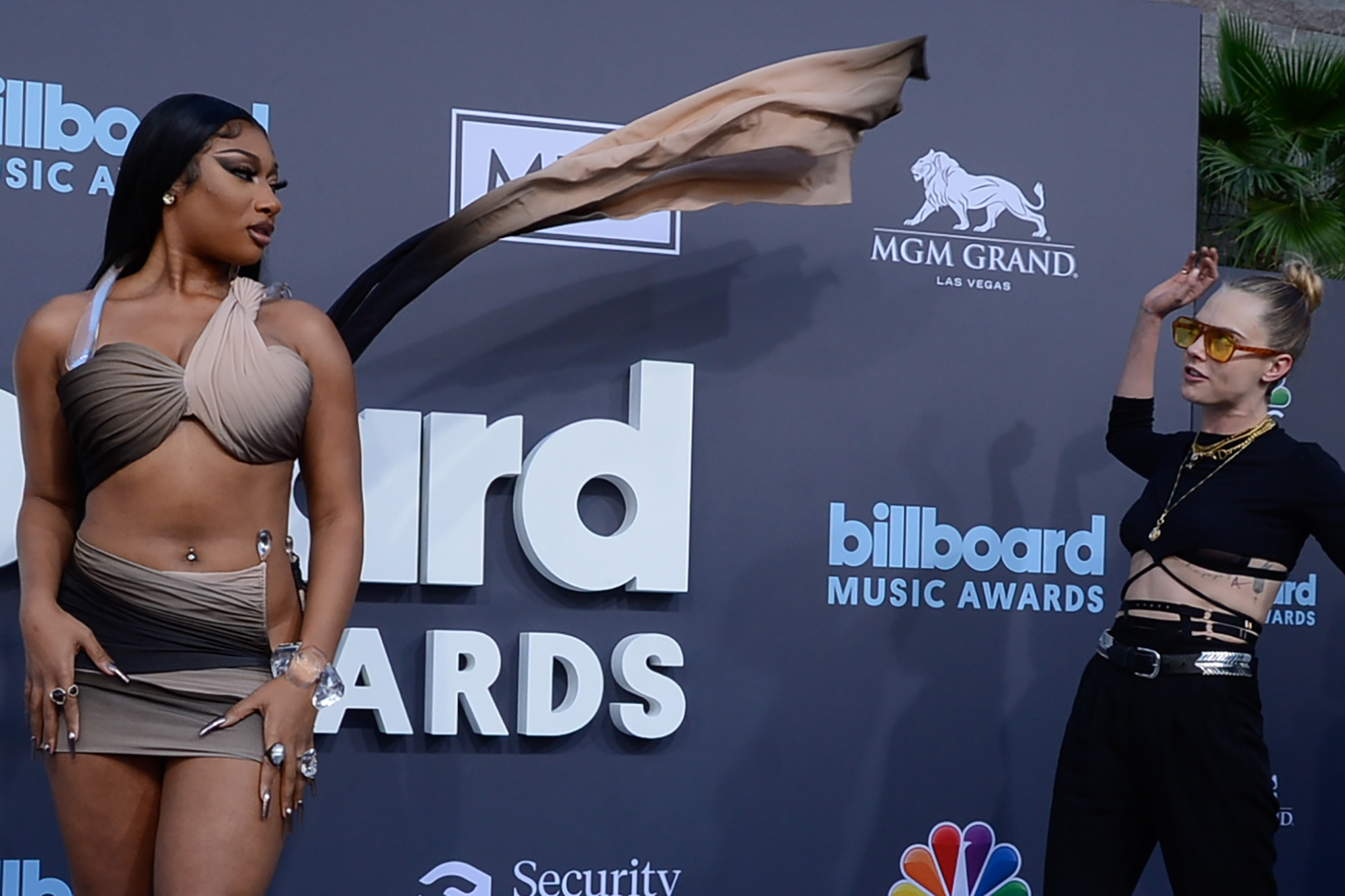 Things took a turn for the worse when Delevingne flew with her older sister Poppy to Black Rock, Nevada, over Labor Day for the first Burning Man festival since the event had to shut down due to the pandemic.

A longtime Burner told The Post that Delevingne was spotted at what she called the “high roller” area of the playa — where Paris Hilton stayed this year as well.

“It’s a group that does a lot of drugs and waits to see the sunrise and then sleep all day in the RVs,” she said. “They kind of go for the dance and the rave culture more than the participation. We call them the plug and play camps. You fly in, your RV is waiting for you but you’re not really part of the community.”

In fairness to Cara, the Burning Man source said the heat and dust this year was punishing. “We were all feral when we got out,” she said. “It wouldn’t have been a good place to go this year for someone with mental health issues.” 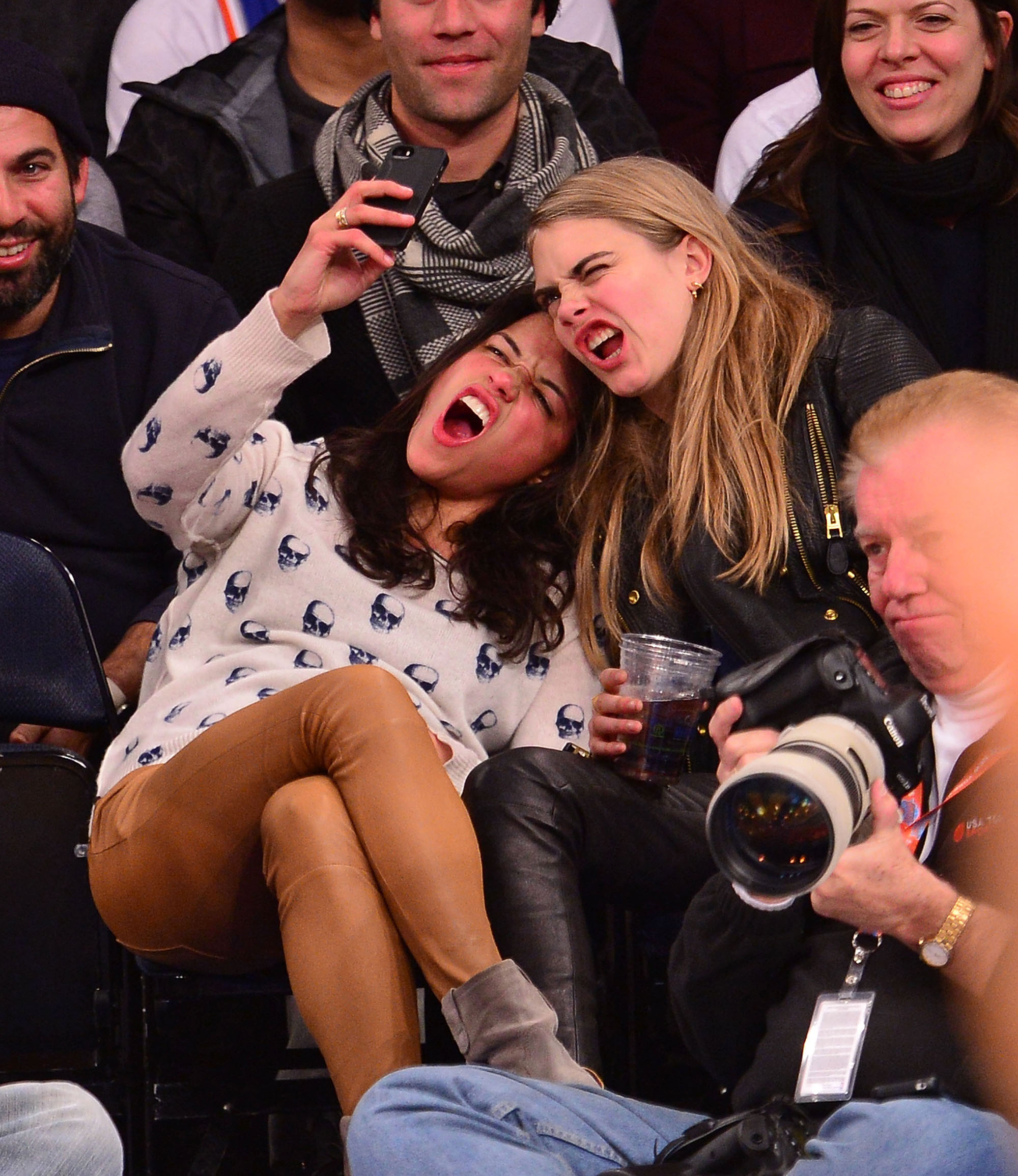 In fact, shortly after Delevingne left Burning Man, photos emerged of her sitting in a car in a West Hollywood parking lot, looking unkempt and aimlessly smoking while taking drops of liquid from a small pipe.

Unlike other British supermodels like Kate Moss and Naomi Campbell who raised in working class households, Delevingne comes from the cream of moneyed, aristocratic London society — a family with more than its share of eccentric English characters.

“That’s why Lagerfeld loved her,” a longtime Parisian-American fashion industry insider who worked with Lagerfeld, who died in 2019, told The Post. “Lagerfeld (whose mother was a lingerie salesgirl) always lied about his background and said he was from royalty. He gravitated toward Cara because she was the real deal. She really does have royal connections and she is part of the English aristocracy.” 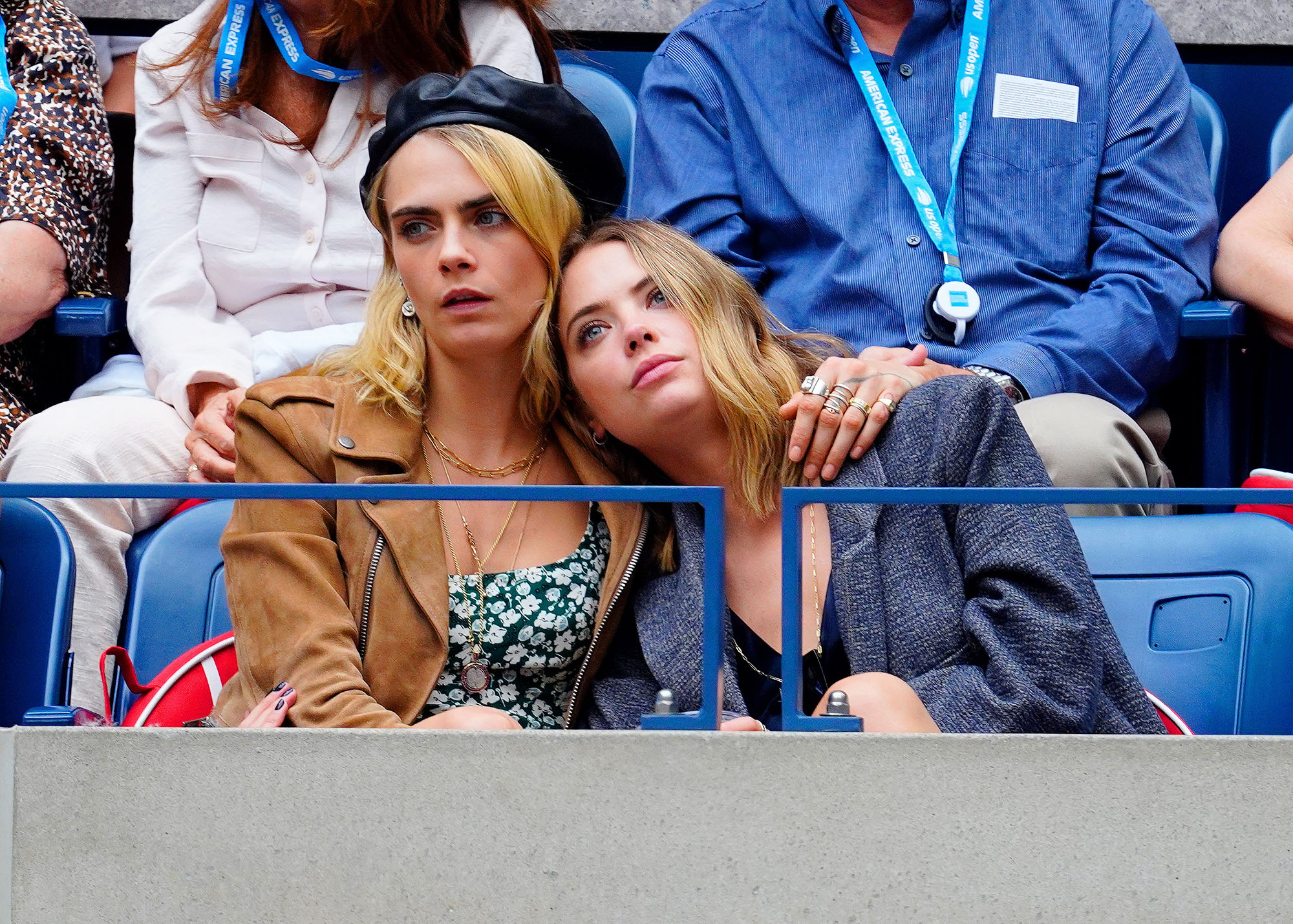 But having blue blood couldn’t save her from what she’s described a stressful childhood and struggles with anxiety and depression that date back to her boarding school days at Bedales in Hampshire.

“Teenagers can be very, very cruel,” she told The Edit in 2017. “I was a very late developer. I didn’t have boobs or start my period till very late. And that whole thing of being called frigid, and being flat-chested… I felt alienated and alone, because I was like: What’s wrong with me? I always wanted people to love me, so I never got angry with them; I turned my anger on to myself.”

She also struggled with self-loathing and dark thoughts.

Though her parents have been married 37 years, Cara’s mother’s addiction problems and mental illness sometimes upended the family. 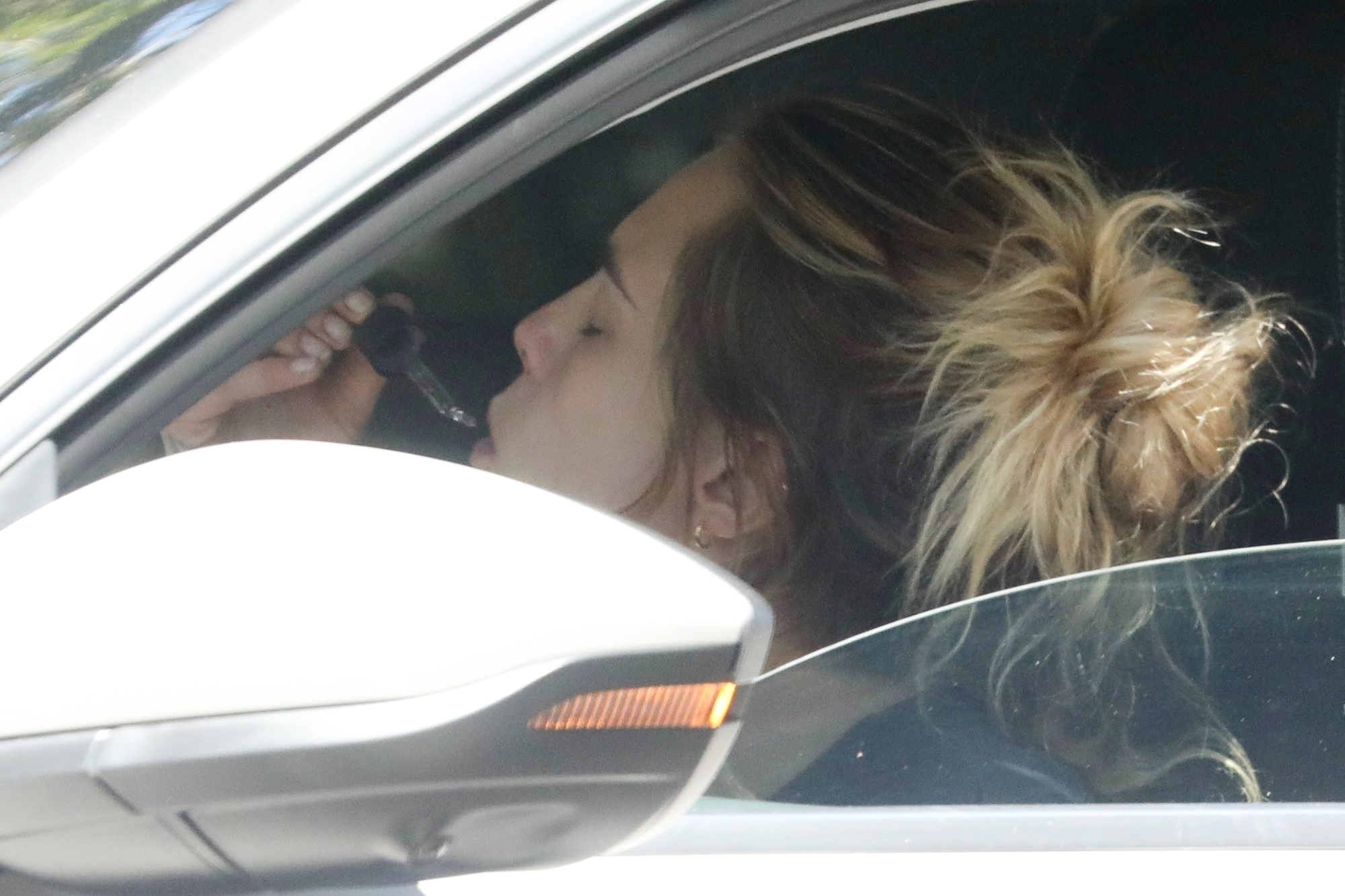 While they were growing up, Pandora once revealed that she would sometimes move out of their home so her daughters wouldn’t have to see her at her worst. She’d often stay with zoo owner and gambler John Aspinall.

“Everyone has something they go through with their family,” Cara told Harper’s Bazaar earlier this year. “My life, I feel, was very stressful, because there was quite a lot of chaos, not being sure if people were OK or not.”

Cara’s grandfather’s first wife, Felicia Gizycka, was the daughter of the notorious Chicago newspaper heiress Eleanor Medill Patterson. Felicia was the subject of international headlines when her father, a Russian Polish count kidnapped her. She became a hopeless drunk who finally found salvation when she met Bill Wilson, the co-founder of Alcoholics Anonymous. 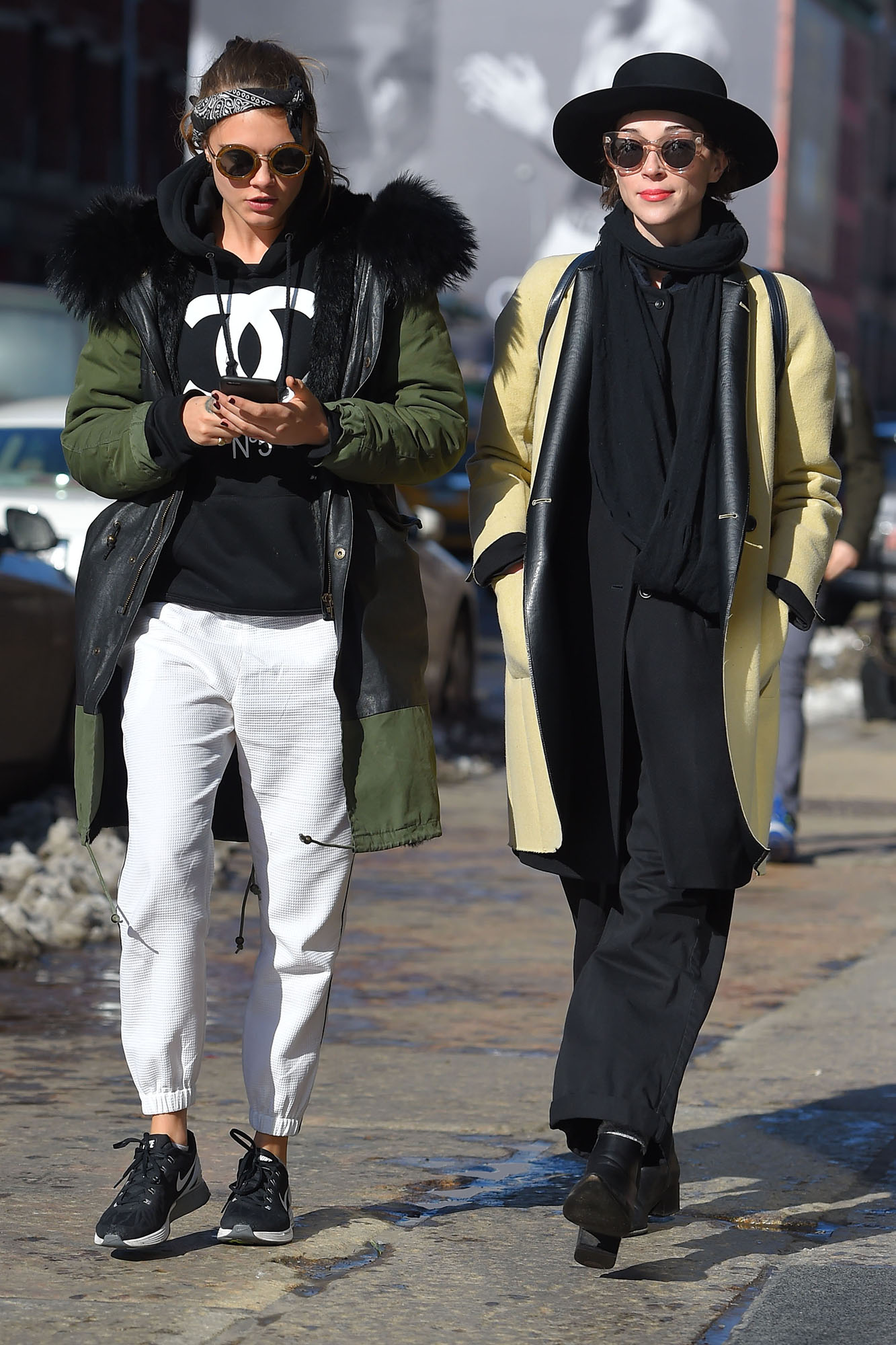 Cara’s late great aunt, Viscountess Castlerosse aka Lady Doris, who was born in 1900, was a renowned high-society beauty and model in her day — who counted Cecil Beaton and Sir Winston Churchill among her admirers, and possibly even lovers. She was referred to as “the most ecstatically beautiful woman in London” but as she aged she lost her bearings and died of a sleeping pill overdose at the Dorchester Hotel in London aged 42.

Cara’s grandmother, the equally photogenic and aristocratic Angela Delevingne, fared much better. She was 102 when she died in 2015. Her father was a viscount and her maternal aunt was the stepmother of Lord Mountbatten’s wife Edwina. Lord Mountbatten was Prince Philip’s uncle and the Queen’s second cousin once removed.

Last year, Cara posted a winsome throwback photo of Angela and a very young Prince Philip on the beach in Venice prior to both their marriages.

Cara’s father, Charles Delevingne, is a prominent London property developer who seems to have rolled with the punches when it comes to his wife and daughters.

“For Charles, it’s hell. I think he’s really suffered,” Pandora said in 2020. “But he says he loves me and that he’ll put up with the bad times because the good times are so amazing and special it’s worth waiting for.” 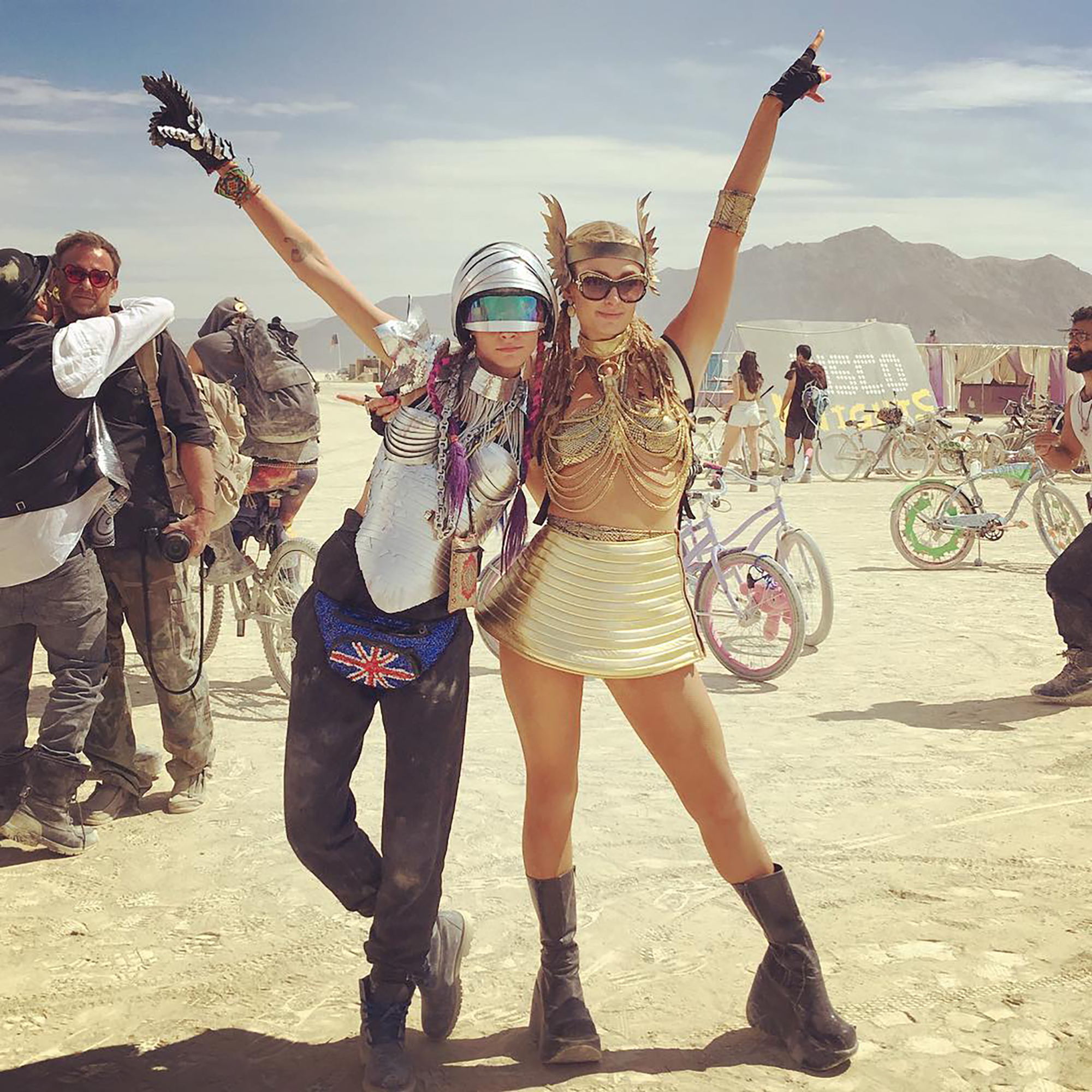 She calls herself a former “wild child” and has said she relates and empathizes with Cara, saying she and her husband were briefly taken aback when Cara came out as “pansexual” in 2018 but quickly adjusted to the news.

Cara’s own wild child spirit served her well when she moved out to Hollywood in 2017 with her sister, Poppy. Her sense of fun included designing a fantastical home in Los Angeles that includes a pink tunnel made to resemble a vulva where she told Architectural Digest she “goes to think.”

“I grew up pretty repressed and English in terms of sexuality,” Delevingne said in 2020 after joining forces with sex toy startup founder Lora DiCarlo. “That relationship that you have with yourself is the most important one in the world.”

Delevingne’s splashy LA pad seemed to align with an acting career that began in 2012 with a small part in “Anna Karenina.” She followed that with starring roles in 2015’s “Paper Town” and 2016’s “Suicide Squad.” She also joined the cast of “Only Murders in the Building” for its second season this year. 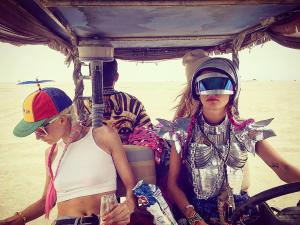 She also starred in “Tulip Fever,” which was produced by Harvey Weinstein. In 2017, after bombshell reports about Weinstein’s history as a rapist and serial sexual harasser emerged, Delevingne took to Instagram to detail how he allegedly made a pass at her and tried to get her to kiss another actress in front of him.

Saying she felt “terrified” after their encounters, Delevingne, who’s been linked to actresses Michelle Rodriguez and Ashley Benson and musician St. Vincent, wrote that Weinstein “said to me that If I was gay or decided to be with a woman especially in public that I’d never get the role of a straight woman or make it as an actress in Hollywood.”

Concerning photos of a visibly upset Margot Robbie, Cara’s friend and “Suicide Squad costar showed Robbie appearing emotional as she left Delevingne’s home earlier this month. It was unclear why Robbie looked upset but speculation online was that she was worried about Delevingne. 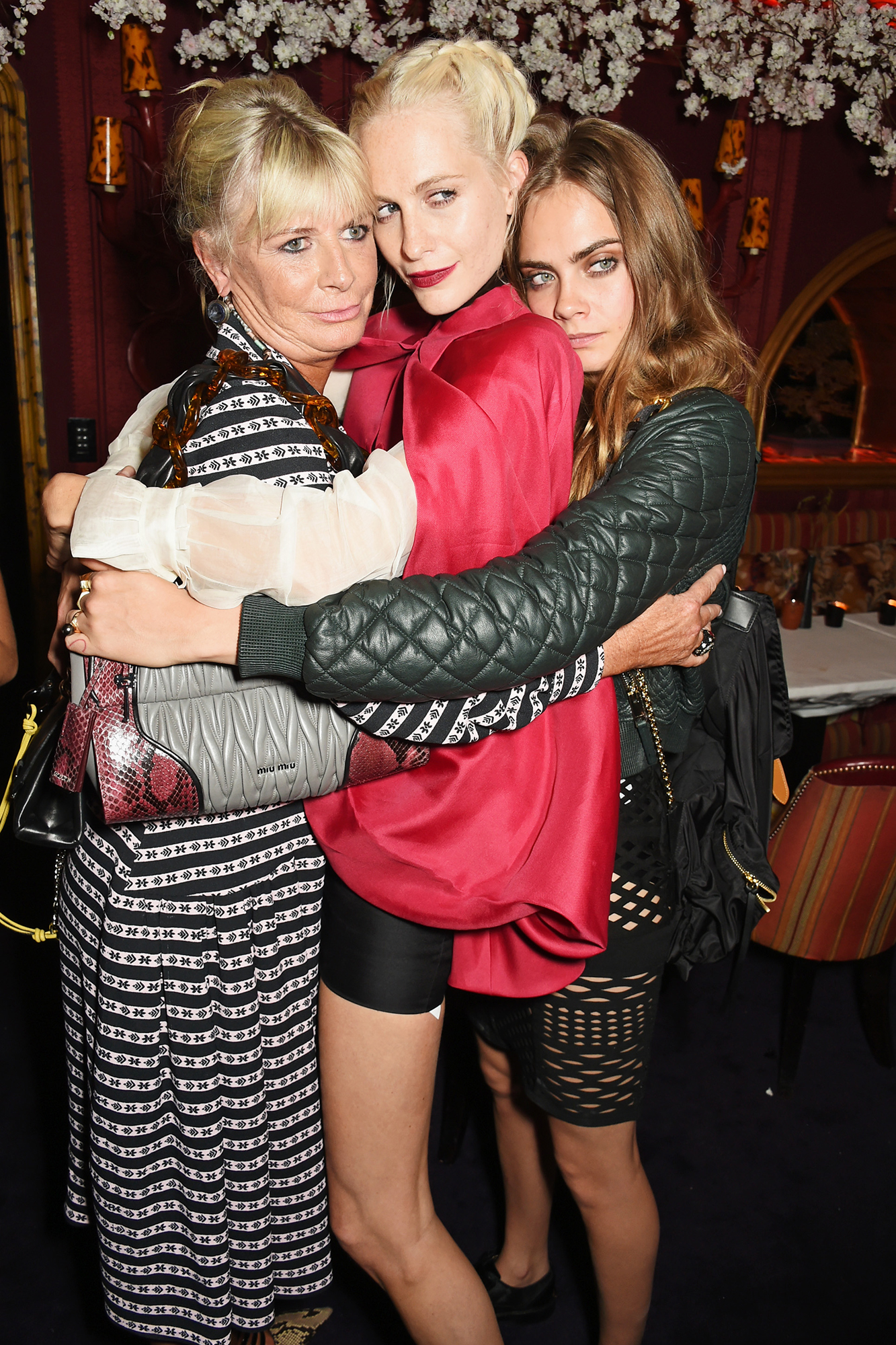 For now, all bets are off as to whether Delevingne will be able to find peace, as her mother eventually did, or continue to founder.

“I’ll tell you right now,” the Parisian-American fashion insider told The Post. “Nobody in Paris wants to touch her right now.”

“I can understand why they don’t,” a former London publicist told The Post. “In a situation like this, they’re damned if they do, damned if they don’t. If they say she’s OK and she takes a turn for the worse the next day, they look like they’re enabling her. Better to stay silent.”

But just last January, in the interview conducted by an old boarding school classmate for Harper’s Bazaar, Delevingne sounded as if her longtime goals include wholesome dreams like having a family — and not so much being a party girl.

“I want to have babies,” Delevingne said in the interview conducted by one of her old boarding school classmates. “But not yet. I buy children’s clothes for my future child who doesn’t exist. Baby shoes really get me — they break my heart. I went shopping the other day and I bought these tiny Air Jordans, which are purple and they have a lion on them. I’m manifesting.”