Very few casual coal mine workers are taking up offers to convert to permanent jobs, in a blow to Labor’s hope of using the issue of insecure work to garner votes in Queensland resource seats it will likely need to flip to win the next election.

Less than 1 per cent of casuals at major labour-hire companies One Key Resources and Chandler Macleod have converted to permanent jobs in recent years, which the firms’ executives said is because casuals prefer keeping their right to a 25 per cent pay boost and more flexibility. 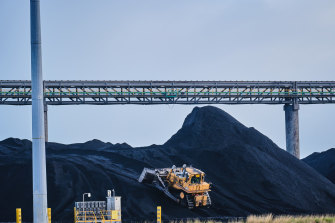 The fate of the coal industry and its workers has become totemic in Australian politics.Credit:Peter Davis

In recent campaigning trips to Queensland, Labor leader Anthony Albanese has emphasised Labor’s industrial relations policy, which would make it easier for coal miners on casual contracts to get permanent jobs, eliminating the risk of having their employment terminated at any time.

Seats in the state such as Capricornia, where Labor is running a third-generation coal miner as its candidate, are key to the party’s attempt to win government and it hopes its industrial agenda will counter any concerns about its environmental policies.

With the resource sector as a whole running hot, casuals were banking on their ability to keep work even without an express guarantee of ongoing employment, said One Key chief executive Ben Lewis.

“They tend to bank on their ability to keep a job and … collect those higher rates of pay whilst the market is in the position it’s in,” he said.

Labor and its allies in the unions have promised to end what they call the “permanent casual rort” in which miners can work for years on predictable rosters while employed as casuals by labour-hire firms.

Labor Senator Tony Sheldon, who is chairing the Senate Job Security inquiry where the companies gave evidence on Tuesday, said the pay gap between those employed by external firms and directly by mining companies made those workers wary of converting to permanent jobs with a labour-hire firm.

Labour-hire firms also restricted conversion rights too much, Senator Sheldon said. Some firms require there to be ongoing work for at least a year before making staff permanent, which is difficult to guarantee when labour-hire firms depend on rolling contracts from clients.

“There is no offer of permanent employment anyway because they say that it’s not ongoing,” Senator Sheldon said.

Labor has promised to legislate to give all workers at a worksite a right to the highest pay for their roles at that location, regardless of what company employs them.

Both One Key’s Mr Lewis and Mark Graham, industrial relations chief for Chandler Macleod, said they had not declined any conversion requests from eligible staff since at least 2018.

Mr Lewis also rejected criticism of his company’s pay practices, saying One Key had agreed on an enterprise agreement with the CFMMEU.

“An average of annual One Key [staff] earnings is over $120,000 per year,” Mr Lewis said. “And if we weren’t paying appropriate wages we wouldn’t be able to attract and retain our workforce and would experience significant churn and have to re-hire all the time.”