Charities are preparing for a surge in demand when the coronavirus supplement for unemployed Australians ends this month, warning a planned $50-a-fortnight increase in JobSeeker will only entrench poverty among the nation’s least well off.

A Senate inquiry into the proposed permanent lift to the JobSeeker base rate has also been inundated by submissions from people on the payment, revealing they had used the larger coronavirus supplement to purchase much-needed health and dental services and fear they will again struggle to make ends meet. 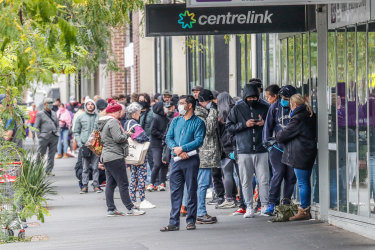 Charities are preparing for a surge in demand once the coronavirus supplement ends and is replaced with a $50-a-fortnight increase in JobSeeker.Credit:Jason South

The current $150-a-fortnight coronavirus supplement ends on March 31, taking the JobSeeker payment back to its pre-virus level of $565 a fortnight. The government is promising to increase that by $50, the single largest lift in unemployment assistance since 1986, in a measure that will cost the budget $9 billion over the next three years.

But critics say the increase is well short of what is needed, leaving the new JobSeeker rate $150-a-fortnight below the poverty level. The government has also been criticised for extra mutual obligation requirements, including the creation of a hotline for employers to report people who “fail to accept suitable employment”.

The Salvation Army’s head of government relations, Major Paul Hateley, has told the Senate committee it already had evidence the gradual reduction in the coronavirus supplement from its initial rate of $550 a fortnight had resulted in people skipping meals and medication while falling behind on bills.

He said people faced a real drop in their overall income as the supplement ended and JobSeeker increased by a lower amount, putting pressure on charities.

“The Salvation Army is now preparing for a substantial increase in demand across the range of
services and supports we provide,” he said.

“Increasing income support by a mere $3.57 per day only serves to entrench a welfare model that relies on the charitable sector to pick up the slack. This drop in overall income will place even more pressure on already-stretched resources.”

He said the promised increase in JobSeeker was “woeful” and a $350-a-fortnight increase, paid by abandoning planned tax cuts or revamping superannuation, should instead be considered.

“We consider that the social security system is there to support those who are unable to find work, and it should do so not by shaming them, removing their agency, forcing them to live in poverty while looking for work, or by imposing onerous conditions and the threats of breaches,” he said.

“These changes do not constitute a fair contract between the recipient and government and are un-Australian.”

Other organisations including the Australian Catholic Bishops Conference, Anglicare Australia and the Council on the Ageing Australia have called for changes to the government’s plan, including an increase in rental assistance.

The committee has so far published 360 public submissions, with more than 200 of them coming from members of the public. In one, an unnamed 61-year-old JobSeeker recipient told the committee that after working most of their life they now found themselves reliant on the payment.

“The COVID-19 supplement was a godsend. I was able to buy decent fresh food, buy a new pair of shoes, pay down debts I acquired because of my inadequate income (utilities and
borrowings of cash from family for dental and medical expenses),” they said.

“[But] $3.57 a day [increase] is unjust. It will not help anyone. I urge the government to listen to the experts and increase the JobSeeker payment to a more realistic level.”

Younger job seekers have also told the committee about the difficulties they are facing.

A 28-year-old woman with a Master’s degree said after falling ill they had left a public sector job. Now trying to get back into the jobs market had become almost impossible.

“I have experience and am highly educated and am not even getting interviews. There are just not jobs. The job market has not returned to the same place it was pre-COVID, and so to expect that job seekers should have to adapt is unrealistic,” they said.

The inquiry will hold its only public hearing on Tuesday, reporting back to the Senate by Friday.

call, charities, for, JobSee, More
You may also like: