Cheaper by the Dozen: Couple are expecting 12th child like in film

The real-life Cheaper By The Dozen! Couple who are expecting their TWELFTH baby 11 years after having their first reveal their children begged for one more sibling to copy the popular movie

A couple who are set to become the real-life version of the family in classic comedy Cheaper By The Dozen are expecting their 12th baby – almost 12 years to the day since they celebrated their first arrival.

Already parents to 11 children – all of whose names begin with the letter ‘c’ – Courtney and Chris Rogers said their brood kept begging for ‘just one more’ baby, so they could be like the film starring Steve Martin and Kate Baker.

Now stay-at-home mother Courtney, 37, says she and her church pastor husband Chris, 33, cannot wait to welcome their new arrival – due in March – into their home in Santa Fe County, New Mexico, adding: ‘We’re so excited as we had wanted 12.

‘I’m very thankful that it’s happening, and the kids are still going to be close in age.

‘I love it and I love being a stay-at-home mom. The new baby will be here right around when my oldest turns 12, in March next year. 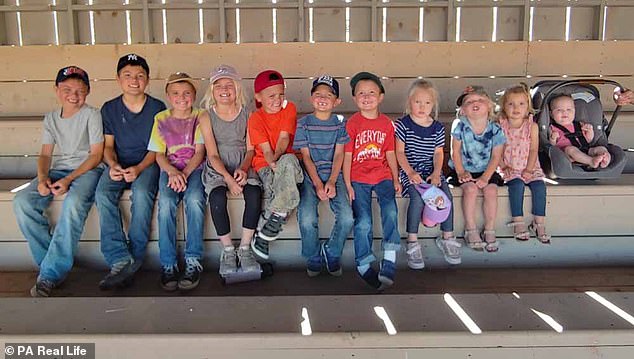 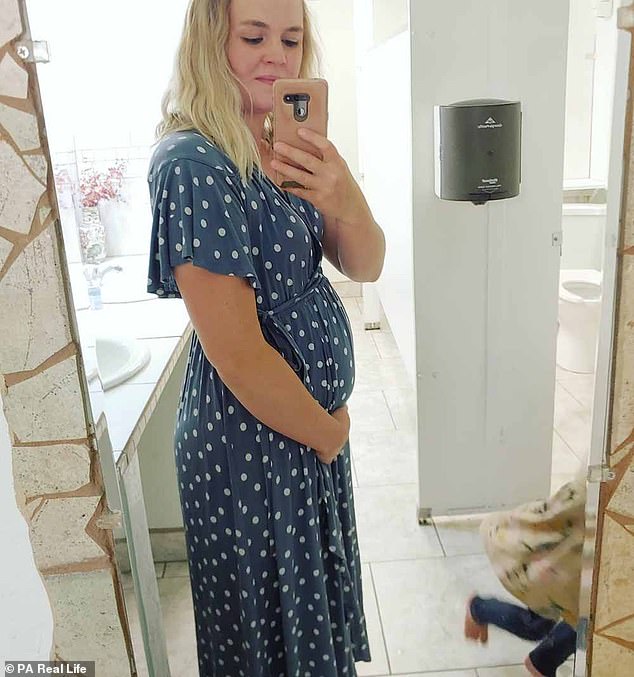 Courtney is now pregnant with her 12th child, due in March, and insists her 12th pregnancy is likely to be her last 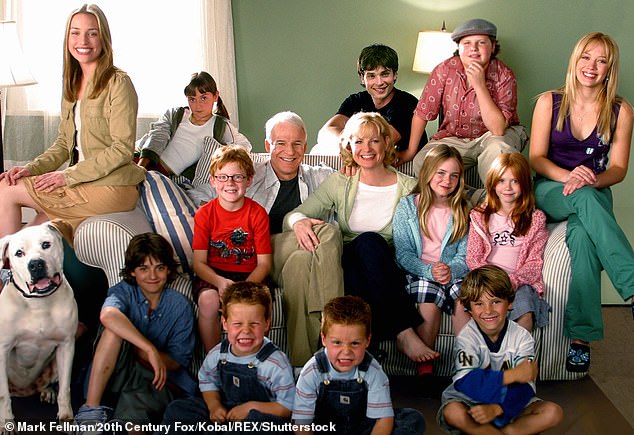 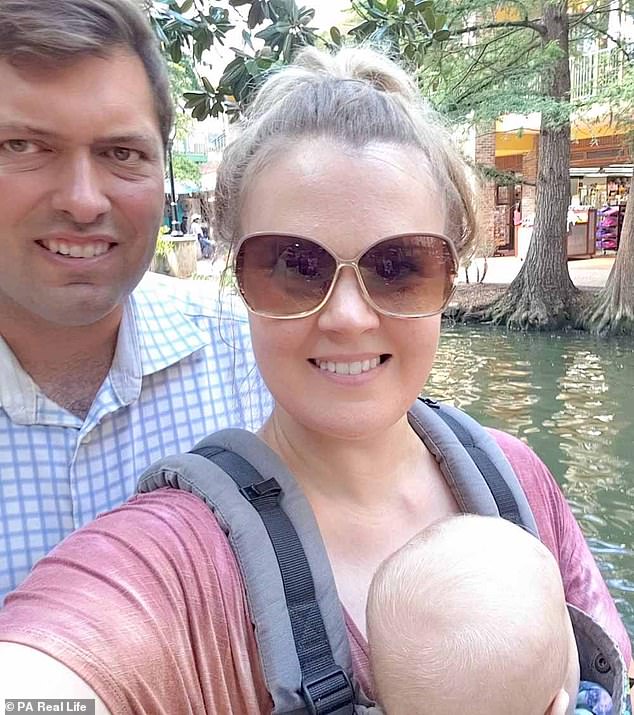 Courtney and husband Chris – a pastor – with their youngest baby, Caris. Courtney said she wanted a big family but never realised she’d end up having so many children

‘One reason my kids wanted us to have 12 is because of the movie, Cheaper By The Dozen. They’ve been wanting me to have another one and kept asking for, “Just one more, Mom, just one more”.’

While the couple, who home educate their brood, do not yet know if they are having a boy or a girl, Courtney is confident the baby’s name will begin with ‘c’ like their other children – Clint, 11, Clay, 10, Cade, eight, Callie, eight, Cash, six, six-year-old twins Colt and Case, Calena, four, Caydie, three, Coralee, two, and Caris, nine months.

‘We’ve been tossing some names around, but we usually keep it a secret until the birth,’ she laughed.

Courtney, who documents their busy lives on a 12-acre plot with their 140 animals, including pigs, sheep, dogs and chickens, on her Instagram page, @littlehouseinthehighdesert, says she did not start married life expecting to have so many children. 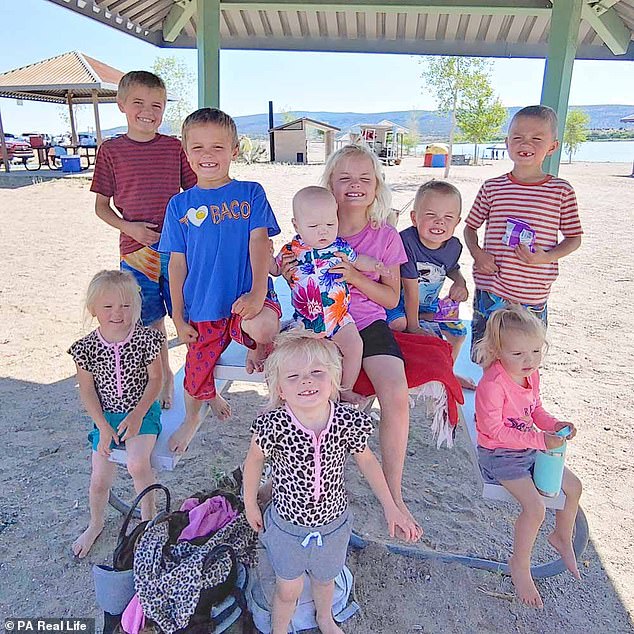 All of the couple’s children have names beginning with ‘c’ – like Courtney and Chris themselves. They are confident the new baby’s name will also start with the letter 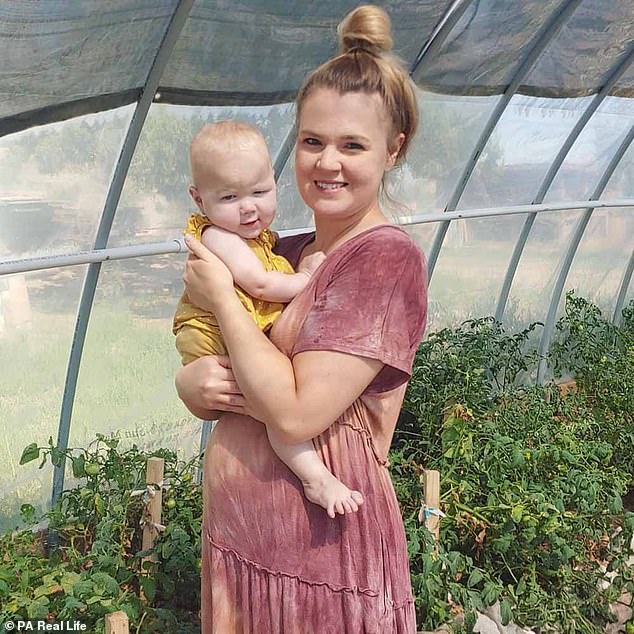 Courtney, pictured here holding her baby daughter Caris, suffered a pregnancy loss before having her first child Clint at the age of 26

She said: ‘When we got married, I was 24. Then we had an early pregnancy loss, so Clint wasn’t born until just before I turned 26. At that point, I didn’t think I was starting motherhood that early. I had no clue we’d have this many.

‘I did want to have a big family, but it was quite a surprise to get here and, so far, have everything working out as planned.

‘We’re hoping to find out the sex of the baby in the first week of October. My husband would like a girl – that way we’d be completely even with six boys and six girls.

‘But I would like another boy, because it’s been so long since we’ve had a baby boy. Either way, one of us will get our wish.’

Courtney does have some worries about a possible tricky delivery as, after three Cesareans, she can no longer opt for a vaginal birth, due to the risks to her and the baby’s health.

She said: ‘My youngest, Caris, had a scary beginning, so we’re a little bit nervous, but we also know we’re going to have a different delivery plan this time around.

‘She was also nine days past her due date. We kept waiting and she just didn’t want to come.’

Caris’ birth was dramatic, because Courtney needed an emergency C-section, due to her daughter being in distress, and doctors feared the tot was not getting enough oxygen.

After her birth, she spent 15 days in the newborn intensive care unit (NICU), where medics warned her parents she could face developmental delays.

But, despite a challenging entrance to the world, Caris has defied expectations, proving to be a happy, healthy addition to the family.

Courtney added: ‘This time we’re going to have a scheduled C-section at around 36-37 weeks.’ 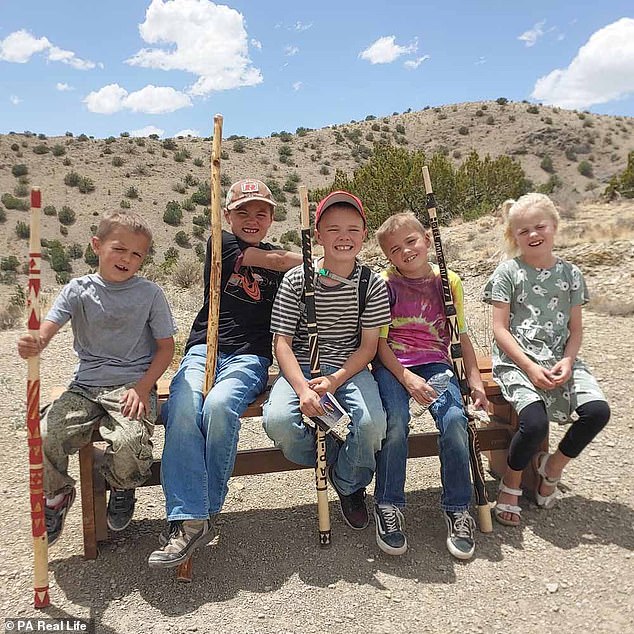 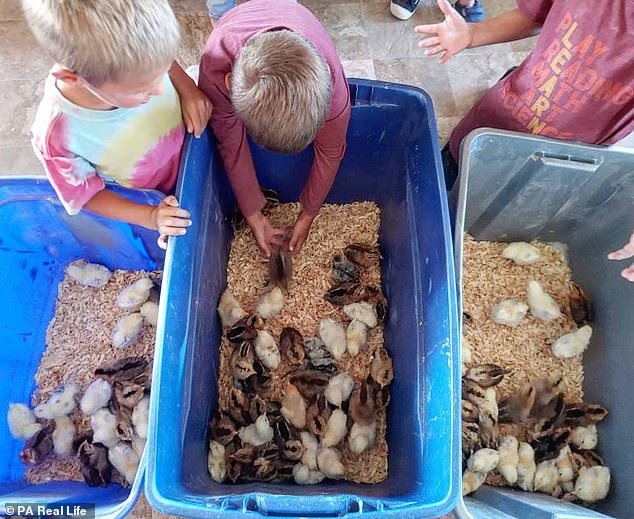 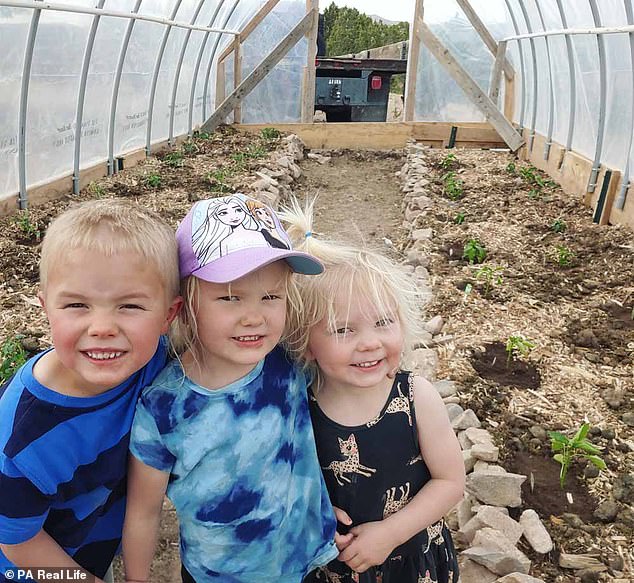 Three of the couple’s 11 children – Case, 6,  Calena, 4, and Caydie, 3. After having 11 kids, Courtney says she loves being pregnant, and doesn’t get morning sickness

Despite worries about the delivery, Courtney loves being pregnant. ‘I’ve always felt fine during my pregnancies,’ she said. ‘I don’t get morning sickness, I don’t have a lot of pain and I can keep up.

‘It’s different for everyone, but my body usually takes pregnancy very well. We probably wouldn’t have had so many if not.’

Now a dab hand at motherhood, Courtney never even asks the older children to help out with the newer additions.

She said: ‘Once you get to a certain number, the parenting doesn’t really change. With the last few, we brought them home from the hospital and it was like they’d always been there.

‘I still mainly care for the babies and they sleep in my room. I might get one of the older kids to hold one of them while I’m finishing supper, but other than playing with them, that’s about all they do.’

Still home schooling them all, the couple also hope to help the older children to make the transition to online school or distance learning of some kind once the subjects get harder. 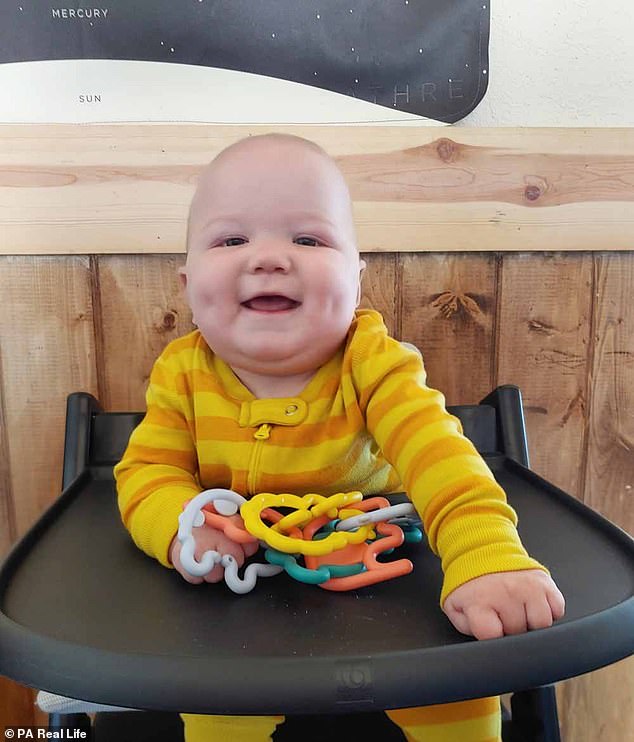 Courtney’s youngest baby – Caris – was born in January. She will be joined by her new (and last) sibling in March 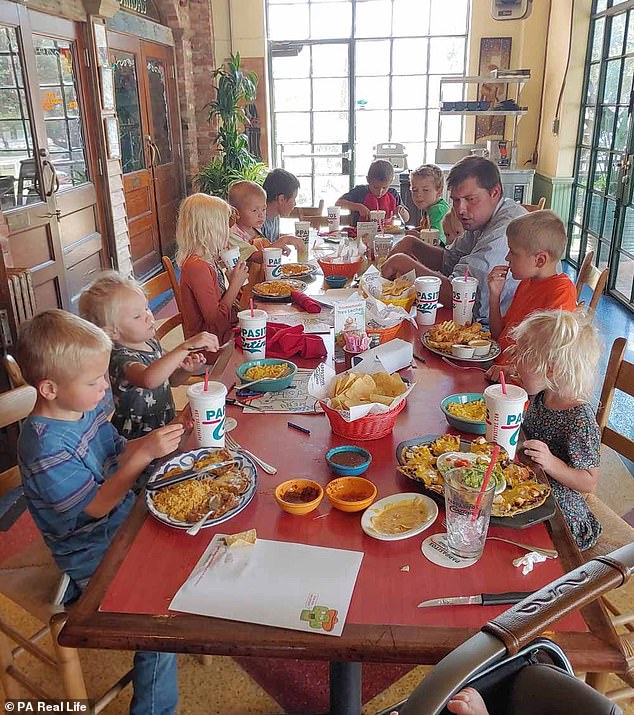 The enormous family sit around the table eating a meal. According to Courtney, ‘once you get to a certain number, the parenting doesn’t really change’ 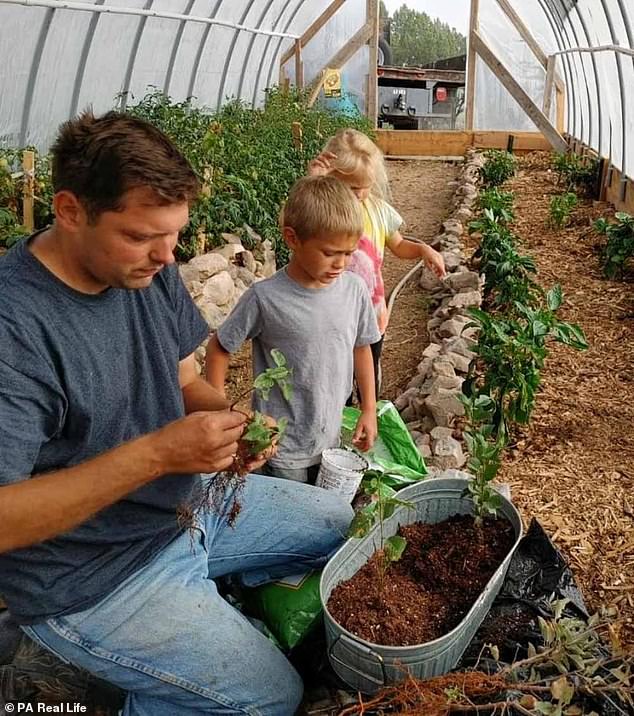 Chris Rogers gardening with Colt and Calena. The couple luckily lives on a large plot of land, as they’ve had to expand their original three-bedroom house to accommodate the family

‘That way someone can teach them while I focus on the little ones’ maths and reading,’ Courtney explained.

Space remains their biggest concern with their ever-expanding family.

Courtney said: ‘We have a 15-passenger van, but when we go on trips, it gets very crowded and we usually have to pull a trailer.

‘The last time we took a vacation, we rented a house, because we’re just getting too big for even two hotel rooms and run out of space.’

They are also extending their home – originally a three-bedroom property – to accommodate their soon-to-be 12 children, two to a bedroom.

‘My husband’s been working on it and it should be done by Christmas,’ Courtney said.

‘We’ll have seven bedrooms, four bathrooms – so two kids to a room.’

And she plans to continue documenting family life on Instagram – in spite of any negativity she receives. 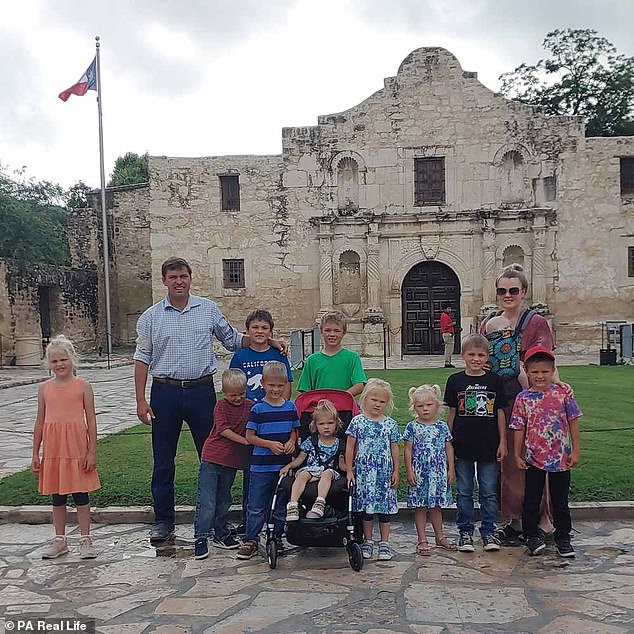 According to Courtney, she does get some rude comments about her large family, but most people are supportive of them 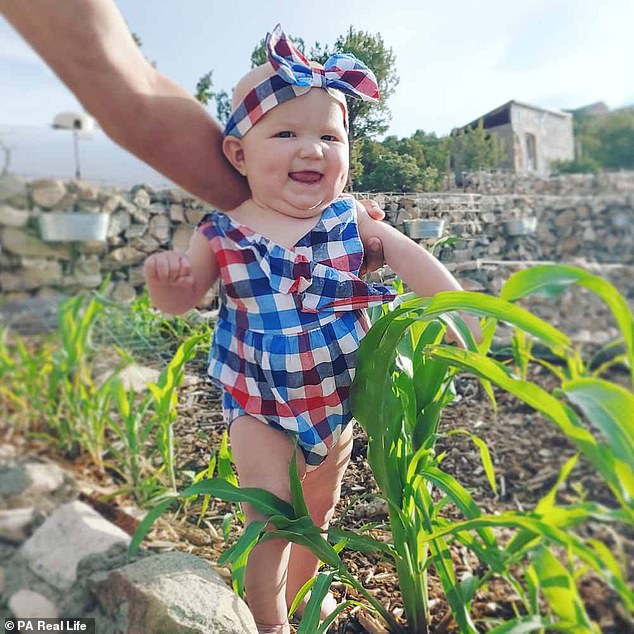 Baby Caris  (pictured) will not be the youngest member of the family for much longer, because she will have a brother or sister next year

She is also making the most of every last moment of this pregnancy – as the couple expect this to be the final addition to their family.

Courtney said: ‘Due to my age and health, most likely this will be my last one.

‘We wanted to get to 12 and I really don’t want to go on having any more C-sections. It’s going to be as I turn 38, so physically, I don’t know if I’ll be able to have any more.

‘I’m sad, but I’m glad also that we have time to mentally prepare – rather than all of a sudden a doctor saying, “You can’t have any more”.

‘I’m still going to be sad, because I like babies. Once they all start getting older, it will be tough for us. But for now, we’re focused on welcoming baby number 12 and becoming the real life Cheaper By The Dozen family.’

a, by, cheaper, couple, dozen, the
You may also like: