‘Confusion and bewilderment’ over childcare access as government backflips on decision

The Victorian government’s decision to restrict access to childcare centres to essential workers has led to a weekend of “confusion and bewilderment” as the Health Department and Minister’s office repeatedly provided contradictory advice to parents.

The childcare decision, announced on Saturday, also pitted parents against employers in a debate about who should bear the cost, with employer groups saying people should take leave to look after their children. 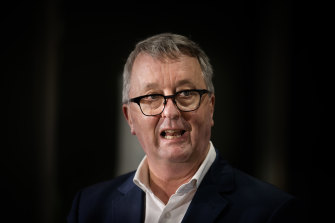 Health Minister Martin Foley on Sunday revealed one quarter of the latest outbreaks were among children aged under 10. Credit:Simon Schluter

Meanwhile, a prominent national childcare centre company told parents via email that staff would not be scrutinise essential worker permits or policing eligibility of vulnerable children because parents were stressed enough already.

One school principal told The Age he had struggled all weekend to get clarity and information from government officials about which children would be allowed to attend childcare and kindergarten from Monday.

The Chief Health Officer’s initial directions, published on Saturday stated both parents would need to be authorised workers to send their children to childcare or kindergarten. But late on Sunday the Premier’s office announced the directions would be redrafted to say childcare access would be permitted if just one parent was deemed an authorised worker. In a further direction even later on Sunday, the department said that parent would be allowed to work from home.

However, Labor MPs were still wrongly advising their communities via social media on Sunday that childcare would be restricted to parents who are both authorised workers.

James Kennard, principal at Mount Scopus Memorial College, said the communication from the government had left many parents confused and worried.

“The government expects school principals and leaders to implement the government’s rules, and yet they leave us confused and bewildered as to what those rules are with just a few hours to go before parents need to turn up at the school gates,” Mr Kennard said.

“Over this weekend, we have not been able to get an answer as to whether parents have to be working outside the home … And if the government is serious with the latest ‘clarification’ that it is only one parent, that is outrageously unfair on millions of hardworking people trying to keep their businesses afloat while working from home.”

Georgie Dent from advocacy group The Parenthood said the childcare restrictions would place a huge burden on already burnt-out parents. She implored Victorian businesses to be compassionate towards families and let workers know that they would not expect high levels of productivity under the current restrictions.

Ms Dent, who was working on Sunday to complete the tasks she could not finish during the week due to supervising her children’s remote learning, said: “It’s not realistic to attempt to have children in the home 24/7 and be productive in the matter their employers are accustomed to”.

Parents understood the danger that Delta represented to children, but that, “employers, government leaders, and businesses” should understand that having children at home was “a short-term solution that is not the fault of individual parents.”

However, Tim Piper, from the Australian Industry Group, said businesses had also been under extreme financial pressure since the pandemic took hold in March last year, and that employees should also “do the right thing” by their employer and take “annual leave, long service leave or even sick leave”.

“Families, not all but often, have got two parents, so there’s a reasonable expectation both parents are going to be supportive of children … and that’s why under all circumstances, there should be a sharing of responsibilities,” Mr Piper said.

“ It is reasonable to take [leave] … Some of these businesses are going through very tough times and it’s up to all of us to put our shoulder to the wheel.”

However, Trades Hall assistant secretary Wil Stracke said not all parents had leave available. “due to Australian business’ decision to casualise employment.

“Secondly, although Tim Piper says ‘parents’, we know that the reality is it will be women. And that repeats the pattern of this pandemic – that it has been women being pushed out of the workforce, losing pay.

“With equal pay day coming up this week, maybe business could shelve their plans for a virtual morning tea this week, and instead listen to the needs of their workforce.”

Victoria recorded 65 cases of coronavirus on Sunday, 55 were linked to the existing clusters, but only 12 were in isolation during their infectious period. Sixteen of those new cases had been announced on Saturday, linked to the Shepparton outbreak, but not yet recorded in official figures.

About one-quarter of Victoria’s 440 active cases are among children under the age of 9, Health Minister Martin Foley said, while more than half were among people aged under 30. One child aged under five is among the 27 people in hospital.

NSW on Sunday reported the country’s highest number of new cases of COVID-19 in one day – 830 infections and three deaths. 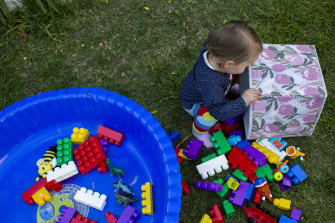 Mass confusion reined at the weekend over who was eligible to send their children to childcare. Credit:Ryan Stuart

At least two childcare centres have told parents they will not be questioning whether parents were genuinely essential workers, saying they would leave it to the parents.

In an email to parents, national childcare group Think Childcare said they would provide parents of vulnerable children with a letter of support to show police if they were stopped on their way to the centre.

Chief executive officer Mathew Edwards wrote: “We are all working in a stressed environment, and we are all seeing stressed behaviours around us,” he said.

“To ask educators to make an assessment if a child is possibly exposed to risk is impossible. Children that were not considered vulnerable previously are now at risk, with parents losing their jobs, businesses closing and domestic violence has increased. This is a time that as a community we support each other, and if a parent believes their child is vulnerable, then we need to accept that on face value.”

Elizabeth Death of Early Learning and Care Council of Australia said parents would need to show permits, but staff would not be scrutinising it in detail.

The opposition’s spokesman for early childhood, Matthew Bach said, “the Andrews Labor government has put Victorian families through the weekend from hell”.

“This farce is inexcusable, and has caused long-suffering parents and children much distress.”

Health authorities are growing increasingly concerned at the speed of the spread of COVID-19, which has now reached Mansfield as well.

When asked if the outbreak was getting away from the public health team, Mr Foley said: “We’re still in the realm of hauling this back”.

“The public health team say when you looked at the earlier parts of the outbreak, through the [Al-Taqwa] College … are under control. What we’ve seen are more cases pop up in areas, in Shepparton, Mansfield, the Royal Melbourne Hospital and other parts of metropolitan Melbourne, that is of great concern.”

Three are linked to a growing cluster at the Royal Melbourne Hospital, which has now grown to at least seven cases. On Sunday morning, deputy secretary of the COVID-19 Response, Kate Matson, said three of the seven cases would be included in Monday’s figures, and that they expected even more cases.

Details of the COVID-19 positive man in Mansfield – believed to be linked to the Shepparton cluster, which grew by 21 cases – will be revealed on Monday.

None of the cases in hospital had been either partially or fully vaccinated.

Mr Foley reiterated his calls for Victorians to get vaccinated, announcing there were about 63,000 vaccination bookings available this week.

The Victorian government is until Sunday allowing all aged care workers and disability care workers to walk up to a state-run clinic and be prioritised for a vaccine of their choosing. 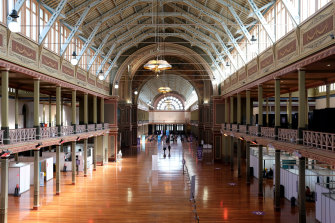 There are about 63,000 vaccination appointments available this week. Credit:Luis Ascui – Pool/Getty Images

Mr Foley also announced the state’s 300,000 public servants will be able to access a half-day paid leave to get inoculated. Industry Support and Recovery Minister Martin Pakula announced further business support for regional Victoria, after it was plunged into lockdown with two hours’ notice on Saturday.