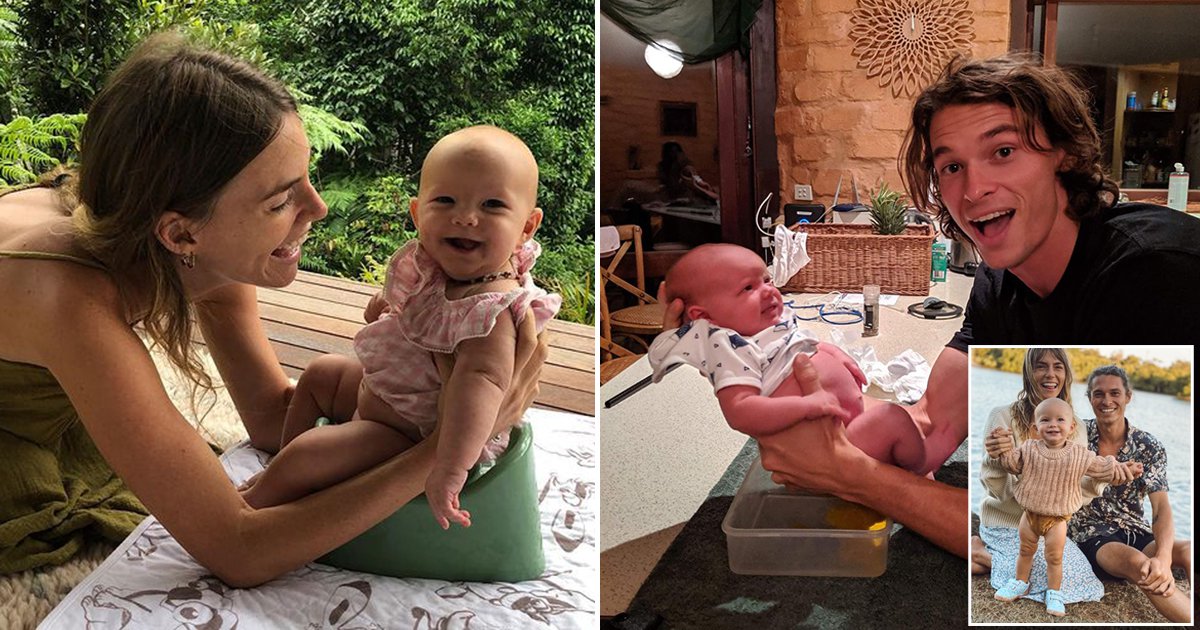 A couple has claimed that they potty trained their daughter at just two weeks old and she can now use the toilet.

Parents Montana Lower and Tom Linwood use a technique called ‘elimination communication’ (EC) with their 21-month-old daughter, Blue, and say she hasn’t pooed in a nappy since she was just a fortnight old.

The Australian couple, who have a YouTube channel called On the Way by Montana Lower, shared a video chatting about how they used EC to teach their daughter.

They also shared tips for other parents.

‘It is listening to your baby for when they want to go to the toilet, and taking them to the toilet instead of going in their nappy,’ Montana explained in a YouTube video.

Tom agreed adding: ‘Every mum knows when their baby is hungry and they have cues for that and they have the same cues when they need to go to the toilet.

‘It’s just about listening and watching for it.’

Initially, the parents were apprehensive and but did some research into EC and decided to give it a try.

Meanwhile, the move has caused a huge environmental and monetary shift for the family,

Tom notes that nappies are expensive and while they admit that they still use some, there has been a drastic decrease in what they use.

‘It’s a lot cleaner if you just take them to the toilet,’ Montana adds.

The mum also notes that her baby will not have to unlearn nappies.

‘Babies are born with no preconceived knowledge about how to go to the bathroom, so if we don’t teach them to go in their nappy, then we don’t have to unteach them,’ she says.

‘So it makes sense to straight up say we got to the toilet this way.’

The couple shared some tips on how to do similar with your baby and advise parents to start in the summer.

‘Number one try dressing your baby in a dress or something you can take off easily,’ Montana says.

‘It’s much easier to learn how to do EC in summer.’

‘Another good thing to do is get a potty, we started off with a plastic container.

‘This is also really good to put in the boot if your car when you’re out and about so you can pull over at any time and chuck baby on the toilet.

‘We recommend setting aside one day, Blue took one day to learn she needed to go toilet in the Tupperware container. Then after that it was up to us to read the signs.’

Even if you are unsure if your baby wants to go to the toilet, it is best to take them even if it is a ‘maybe.’

‘After that you could tell Blue is like “I go to the potty now, take me to the potty,”‘, Montana notes.

‘It was really sweet because she was two weeks old when that happened, and it blew our minds.’

The couple also says that EC works best when one parents is with the child all the time and that it is a form of empowerment as it shows Blue she’s ‘being heard and her needs are met’.

When it comes to toilet training, the NHS says that most children are trained between two and two and a half but ‘there is no perfect time’.

‘Remember, you cannot force your child to use a potty,’ the health service notes.

‘If they’re not ready, you will not be able to make them use it.

‘Most parents start thinking about potty training when their child is between 2 and two and a half, but there’s no perfect time.’