Ruddy died in the arms of his partner, actor Roberto Meza Mont, at his home in Byron Bay, in northern NSW, on Tuesday. In a statement, Meza Mont, Ruddy’s twin sister, Kelli O’Shannassy and his family, said they were devastated and in shock. 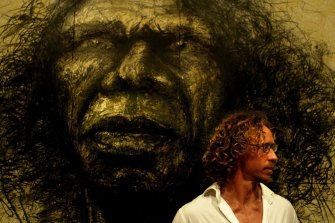 Craig Ruddy with his popular but controverial Archibald Prize-winning portrait of David Gulpilil in 2004.

Ruddy’s death follows the passing of the subject of his most famous artwork, David Gulpilil: Two worlds, in November aged 68.

The large-scale painting of the Aboriginal actor, who achieved global frame in movies including Rabbit Proof Fence and The Tracker, won both the Archibald Portrait Prize and People’s Choice Award in Sydney and Melbourne in 2004.

But the striking portrait ended up the subject of a lengthy legal battle after another entrant, artist Tony Johansen, acted against the Art Gallery of NSW claiming his work was not eligible to win as it was “not a painting but a drawing”.

The court heard that Ruddy, then 37, had used acrylic paint, charcoal (stick and powdered), pencil, Conte sticks (a form of crayon), pastels and varnish in his work, which took two weeks. Ultimately, NSW Supreme Court Justice John Hamilton dismissed the claim saying it was “impossible on any objective basis to exclude the portrait from the category of a work which has been ‘painted’.” 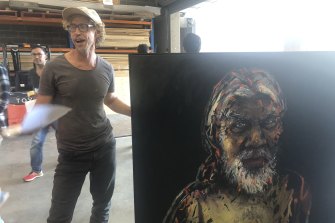 Artist Craig Ruddy dropping off his third portrait of David Gulpilil into the Archibald Prize in 2021.

At the time, Ruddy said of his winning portrait: “The bold, free spirited line work of the charcoal and graphite contrast with the structured and refined opulence of the colonial English wallpaper. I hope that the work represents the energy and spirituality that I experienced in his presence.”

He would paint Gulpilil for two more entries, including for his most recent in 2021, which he drove across the state, leaving Byron Bay at 2am on the day entries closed, to get the portrait to the Art Gallery of NSW in time.

In 2010, Ruddy won the Archibald Prize’s People’s Choice Award for his third entry, a portrait of Aboriginal director Warwick Thornton called Prince of Darkness. He was a finalist a total of five times, including with a self-portrait in 2006, with a portrait of Cathy Freeman in 2011 and with a portrait of Bruce Pascoe in 2020.

Born in Sydney in 1968, Ruddy worked as a commercial art director before he quit his career to pursue his passion for art full time in 2001. He travelled extensively and moved between Sydney, Europe and South America, establishing a second home in Buenos Aires, Argentina, before he moved to a hilltop home in the Byron Bay hinterland in 2015.

Ruddy’s biography on his website said that since his move he had focused his energies “on creating a beautiful home environment with his partner by immersing himself in the garden and studio”.

“Ruddy’s commitment to nourishing a more wholesome lifestyle, has enabled him to better represent the plight and essence of those who he portraits, as well as draw greater awareness to important issues that are close to his heart such as land regeneration, women’s empowerment and becoming a genuine ally for Indigenous Australians,” the biography said.

“We have lost the most divine human that gave so much to our communities, the creativity, the inspiration, the pure love and plenty of dance. Let’s remember him as he was always wanted to be remembered.

“We ask over these next few days a quietening within, to light a candle & play the music that moves you softly. The next week we will be devoted to loving Roberto through as he has always done for us.”