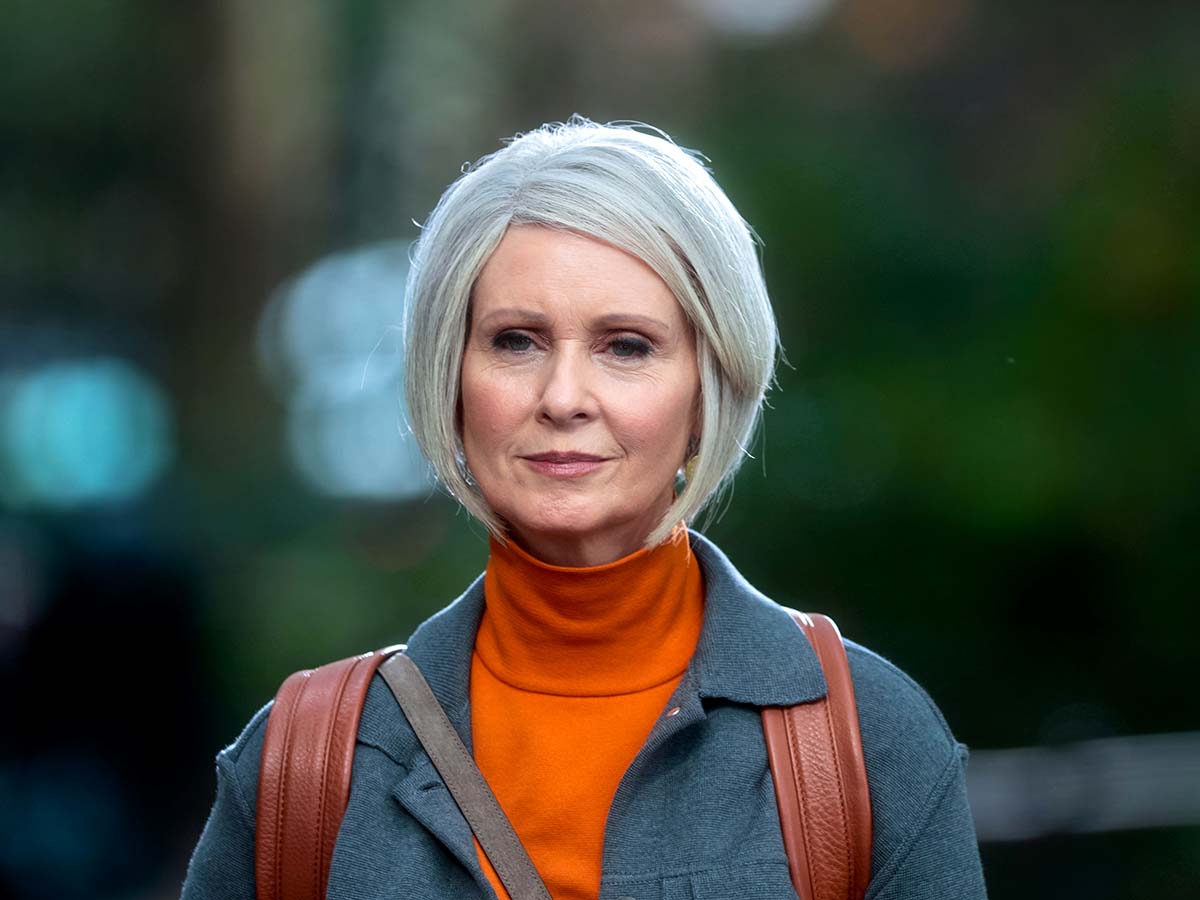 Gray hair, don’t care! Cynthia Nixon has been sporting some silver strands while filming … And Just Like That, the Sex and the City revival. And as it turns out, the decision to have the 55-year-old actress rock a new hue was a decision made by the show’s execs.

On the Wednesday, December 8, episode of Live With Kelly and Ryan, Nixon, who plays Miranda Hobbs in the series, opened up about her headline-making hair color.

“Michael Patrick King, who is our chief writer and director, he was like, ‘You know a lot of women during the pandemic, they couldn’t get out to the beauty parlor and they decided to go gray and then they decided that they liked it. So if it was going to be one of the women, we think it would be Miranda,’” she told Kelly Ripa, who embraced her natural color during the peak of the pandemic. “So yea.”

Nixon isn’t the only star from the series to receive comments about her aging appearance. Both Sarah Jessica Parker, who plays Carrie Bradshaw, and Kristin Davis, who plays Charlotte York, have also made a point to defend their looks since filming started.

Did ‘And Just Like That’ Film ‘Fake Scenes’? Kristin Davis Says…

Earlier this week, Davis, 56, told Today that all the comments about her complexion “still hurt.” To help block out the haters, she’s developed quite the strategy with Parker. “Sarah and I are currently in a media blackout,” she said. “Cynthia is tougher and she is not, so we’re like, ‘You tell us later, ok?’”

Still, the Holiday in the Wild star shared that having a constant flood of paparazzi on set with a goal of trying to get a “bad shot” is extremely “frustrating.”

Parker, 56, has also clapped back against the “misogynistic” comments about her appearance that she says would “never happen” if a man were in the role. Case in point? Earlier this year, she was photographed alongside her friend Andy Cohen, who has a full head of silver hair. Still, the topic of conversation surrounded her natural locks.

“Gray hair gray hair gray hair. Does she have gray hair? I’m sitting with Andy Cohen and he has a full head of gray hair and he’s exquisite,” she told Vogue in her December cover story, which ran online in November. “Why is it OK for him? I don’t know what to tell you people!”

‘Sex and the City’ Drama Through the Years: A Timeline

Cohen quickly came to her defense, standing by the fact that Parker was “so right” in her analysis. “It was insanity. People just missed the mark totally,” he added.