A whole new world! Father edits his daughter’s Disney books to remove all ‘gender stereotypes’ – making The Little Mermaid abandon her prince in favor of pizza while Cinderella marries Beauty and the Beast’s Belle

A dad is going viral on TikTok for changing his daughter’s Disney books to remove all ‘gender stereotypes’ in the hopes of encouraging his child not to ‘settle’ for society’s sexist standards.

The Minnesota-based father, who is known only as @dcaspers online, put his graphic editing skills to use by transforming a series of Disney story books to alter the plotlines, documenting the entire process in a host of now-viral videos.

Explaining that he wanted to ‘teach his daughter not to settle for the stereotypes’ found in the books, the dad took it upon himself to change the endings of the princess-focused stories, in many cases writing solo scripts for the characters, which see them leaving their princes in favor of pursuing their dreams.

The doting dad recorded the entire process and posted it on TikTok, which quickly garnered him millions of views and thousands of comments. 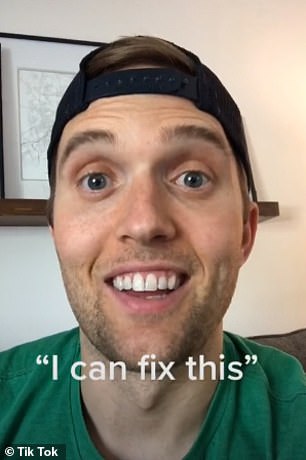 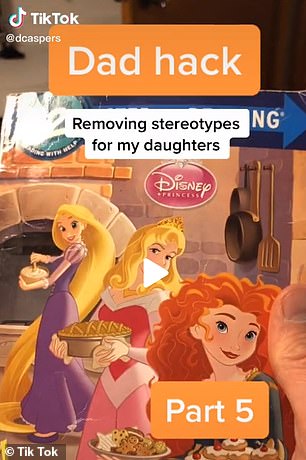 TikTok user @dcaspers going viral for changing his daughter’s Disney books. He edited them in an attempt to remove what he felt were gender stereotypes from the stories 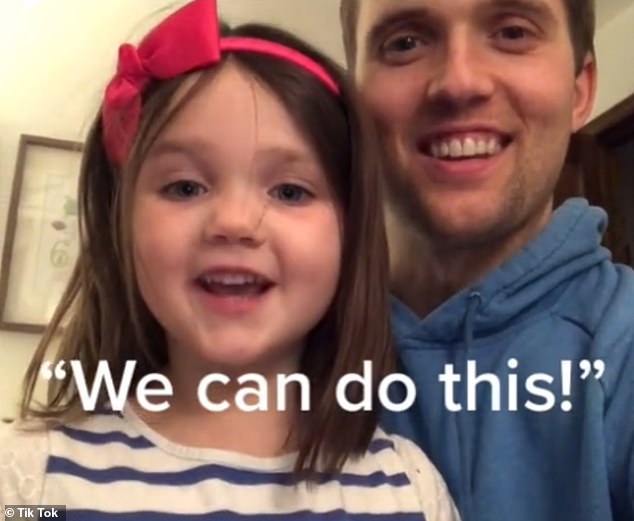 Teamwork: The Minnesota-based dad explained that he wants the books to teach his daughters that they don’t have to ‘settle for stereotypes’ 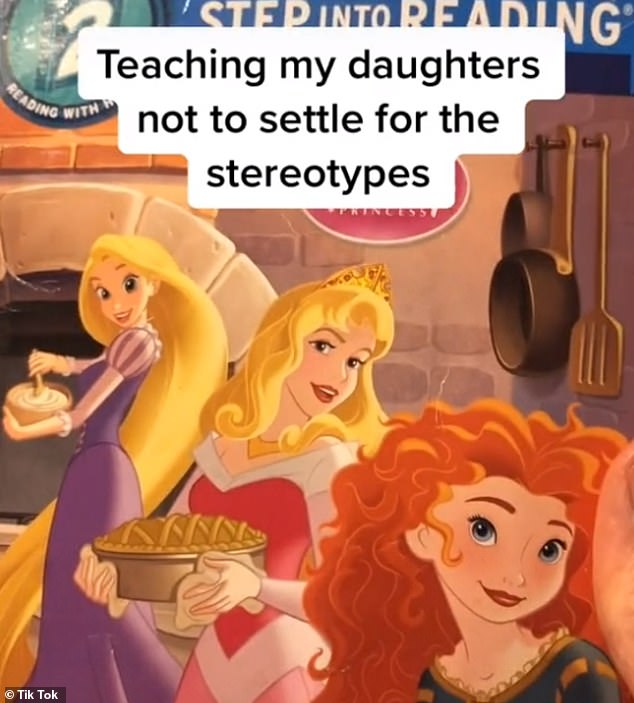 Something new: The dad documented the entire process in a series of TikTok videos which have quickly gone viral

In a Princess and the Frog book, for example, Tianna baked her prince a cake. But the father felt she shouldn’t have to cook for him, and decided to change things up.

Originally the page read, ‘What does Tianna love more than baking? Sharing her treats with Prince Naveen!’

In his new version, however, Tianna made nachos instead, and didn’t share them with her man.

‘Excuse me, Prince Naveen. These nachos are just for me,’ he changed the writing to.

Although some people were here for his edits – with tons of comments like, ‘I love this,’ and, ‘Best dad ever,’ rolling in – others were not.

‘So instead of learning from history, we should just erase it and change it to fit our own likings?’ one person quipped in the comment section.

Another added, ‘Should I tell him about the studies that came out, showing girls into Disney princess stereotypes grew up stronger/more independent, or do you guys [want to]?’

In a second video, the man changed a book that was based on ‘Beauty and the Beast.’

He made it so that instead of making cookies for the Beast when he was feeling sad, Belle picked some up from the store for him – since she ‘worked all day and only made 78 cents to the dollar.’

‘There is nothing wrong with Belle making brownies, you’re going too far,’ one commenter wrote underneath the video.

‘If my bae is sad, I’ll cooking something for him ’cause the food cheers him up. Even if I’m busy, I’ll find the time. It’s called caring for someone,’ someone else chimed in. 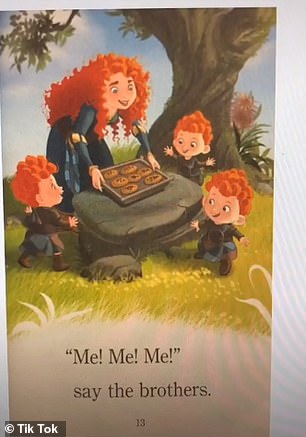 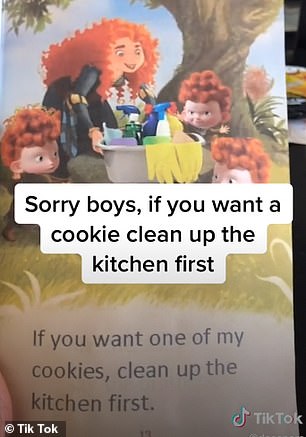 In another edit, the dad changed a Brave book so that Merida didn’t let her little brothers have any of her cookies until they helped her clean the kitchen 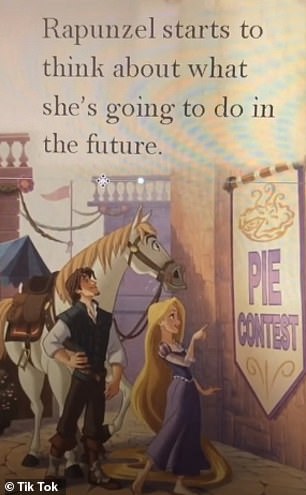 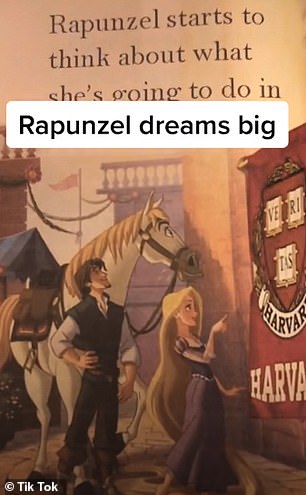 He then switched a book about Rapunzel so that she went to Harvard, instead of taking part in a pie-baking competition 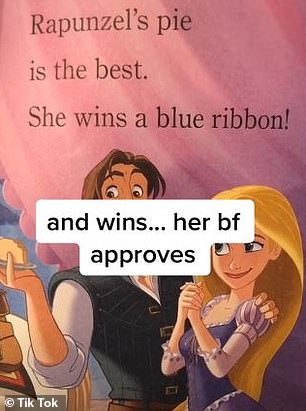 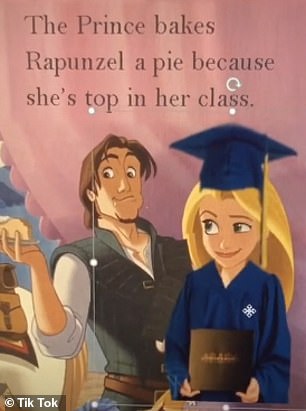 In the father’s new version of the book, Rapunzel’s partner Flynn bakes her a pie to congratulate her for graduating at the top of her class

In another edit, the dad changed a ‘Brave’ book so that Merida didn’t let her little brothers have any of her cookies until they helped her clean the kitchen.

He then switched a book about ‘Rapunzel’ so that she went to Harvard and became the top of her class.

‘Rapunzel dreams big and wins top of her class… Now [Flynn Rider] bakes her a pie,’ he captioned it. This one seemed to garner a lot of positive feedback.

‘I really love that you do these, they are cute and inspirational. Well done dad, your daughters have a great role model in you,’ someone gushed.

‘I love this, I’d rather buy this book than the original,’ another user commented.

In the book about ‘The Little Mermaid,’ the dad pointed out that Ariel changed her body and left her friends and family all for a man.

So instead of cooking for Prince Eric, he felt that she should order in a pie of pizza and watch TikTok videos instead.

‘Ariel changed because she always wanted to live on land, a hot man was just a fun bonus,’ someone pointed out.

‘How is encouraging your daughters to order junk food better than encouraging them to be skilled in something and therefore truly independent?’ another TikTok user asked. 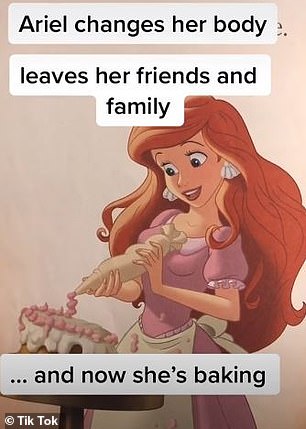 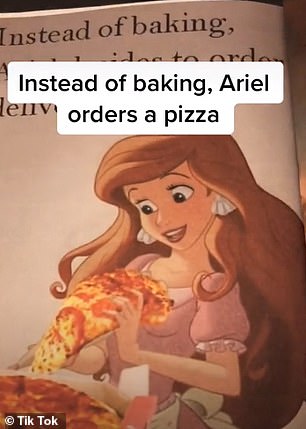 In the book about The Little Mermaid, the dad felt that Ariel should order in a pie of pizza and watch TikTok videos instead of cooking for Prince Eric 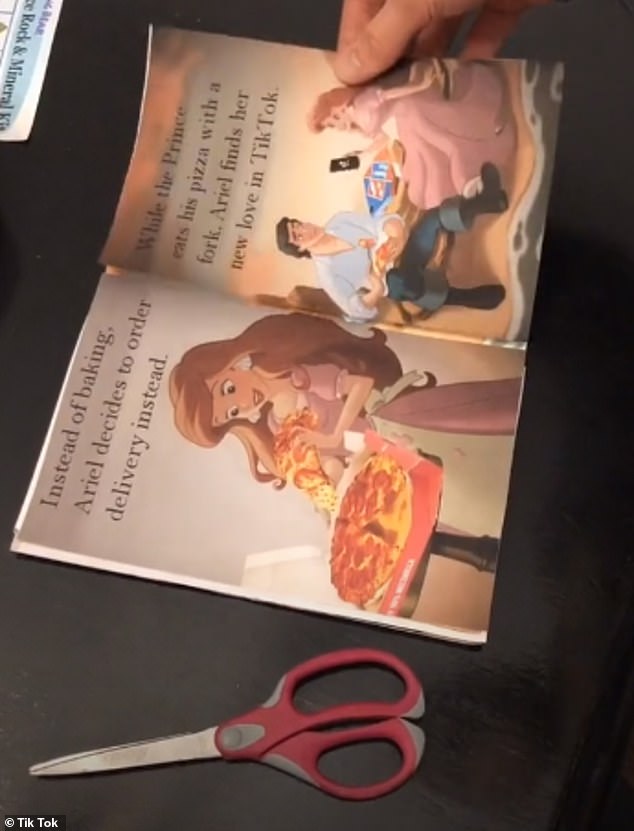 He scanned the pages in and photoshopped the pictures and writing on them. He then printed out the new versions and glued them over the old pages

He even changed a ‘Snow White and the Seven Dwarves’ book to feature Doc cleaning the whole house for Snow White.

Plus, in a story about Cinderella, he made it so that the Princess stuck up for herself against her evil step sisters and took control of her future.

And when one commenter suggested that Cinderella find a wife instead of a husband at the end of the story, he changed the book even further.

He edited it (this time, with the help of his daughter) so that she and Belle could be seen dancing together at the end of the story.

‘Cinderella goes to the ball and finds her true love,’ he wrote.