DEAL OF THE DAY: Shoppers ‘impressed’ with alternative to air fryers 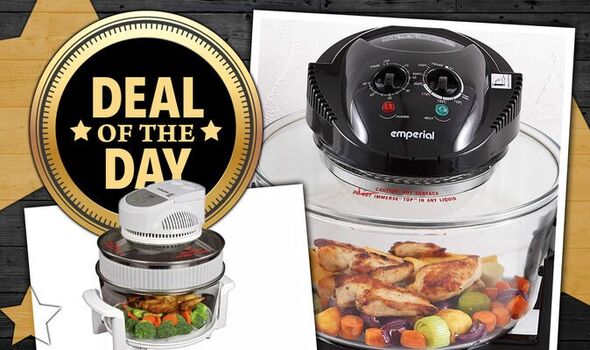 With energy costs rising, cheaper methods of cooking are being discovered by Brits as research has found that running a conventional oven is expensive and uses a lot of energy.

The Cookworks halogen oven is ideal for baking, grilling and roasting, lus it’s a great size for family meals.

Amazon has a halogen cooker for £54.99, and the variable time and temperature dial gives you full cooking control.

Using smaller appliances is much more energy-efficient, and many have been making the switch to air fryers, which are also healthier than frying as they use little to no oil.

Halogen ovens have been around for a while, but amidst the energy crisis, are recently being discovered as another alternative to air fryers that is also both healthy and cheap to run.

Argos has a Halogen cooker for only £56, which is cheaper than many air fryers, plus it costs just as little to run and is also a healthy cooking method.

The oven also has 10 heat settings, and a timer for perfectly cooked meals.

Customers on Argos’ website have been reviewing the oven, Beryl said: ”Excellent oven. Very easy to use, efficient, does not use much electricity for what it does. Good for cooking from scratch or for just finishing off (e.g. roasting potatoes).”

Coalbird also added: ”So cheap to run, sold main oven years ago. No cleaning on hands and knees. Would not be without one. 5 star piece of kit!!!”