Exhibit G was shown on the screen, disembodied from its owner – the white, sleeveless midi cocktail dress Brittany Higgins was wearing the night she alleges Bruce Lehrmann raped her.

Lehrmann, whose sexual assault trial is being heard in the ACT Supreme Court, is pleading not guilty to the charge against him.

He sat with his head down, taking notes, as the jury looked at a picture of the dress, which had been laid out for photographing like a ghost from his previous life, and from Higgins’. 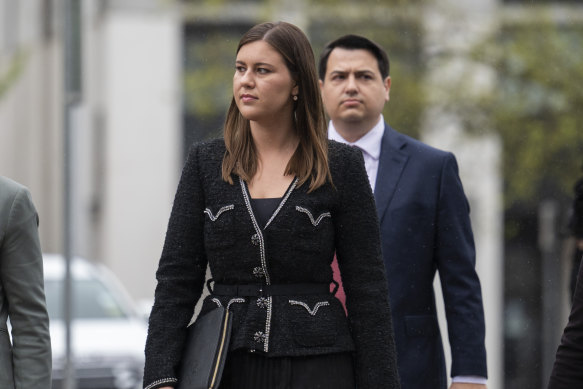 “I kept it under my bed in a plastic bag for a good six months, untouched, uncleaned.

Previously, Higgins had given evidence that in the week following her alleged assault at Parliament House in the early hours of March 23, 2019, her chief of staff Fiona Brown had seemed sympathetic at first.

But once their boss, former defence industries minister Linda Reynolds, had been informed of the alleged assault, Brown’s tone changed, Higgins told the court.

She felt she had to choose between reporting the assault to police and keeping her job, particularly as the government would soon go into caretaker mode before the 2019 election.

Higgins was also under pressure from her boss to travel with Reynolds to Perth for the duration of the election campaign, she said.

The white dress, she said, was “like this weird anchor for me”.

“Once it became clear I couldn’t proceed [with a police complaint] and keep my job,” she continued, “I very symbolically washed the dress and I wore it once more, and I have never worn it since.”

In the afternoon session when Higgins was cross-examined by Lehrmann’s barrister Steven Whybrow, the dress came up again.

He referred to Higgins’ previous description of the dress to police as “a white cocktail dress that comes just below the knee … it has these spaghetti straps and this square neckline”.

Whybrow then showed Higgins a photograph of her on May 15, 2019, at a Liberal party dinner in Perth.

She was wearing the white dress.

Higgins, having decided not to proceed with a police complaint at that time, had travelled to Perth with Reynolds – the court heard she was desperate to hold on to her dream of working as a media adviser in a Liberal government.

She took the white dress to Perth, and wore it to the May 15 dinner, held just a few days before the 2019 election, and less than two months after the alleged assault.

“You’re wearing the same dress aren’t you?” Whybrow asked Higgins, referring to the May dinner.

“You said before lunch it was six months that this dress stayed in a bag under your bed.”

Higgins responded that “clearly the amount of time that I alluded to that had passed from it being under my bed to it being worn was longer than I thought.”

“It stayed under my bed for a period of time,” she continued.

“I was wrong in saying it was six months. It was clearly shorter than that … I was wrong.”

Whybrow stayed on the issue.

“May I suggest to you,” he said, “that you weren’t wrong, you were not giving true and correct evidence when you said that.”

“I made a mistake,” Higgins replied.

Under this line of questioning, Higgins said she wore the dress in Perth as a way of “reclaiming my agency”.

“It may sound ridiculous to you, but it was kind of an empowerment thing,” she said.

The white dress was eventually tendered to the Australian Federal Police in a bag, and now forms part of the body of evidence for this trial, set to continue for another five weeks.