Dianne Durham, the first Black woman to win a United States Gymnastics national championship, died in Chicago at the age of 52 on Thursday. Her husband told the Associated Press that Durham had a “short illness.”

Durham was a trailblazer in American gymnastics. At only 14 years old, Durham won the all-around at the 1983 national championships and was the first Black woman to do so in the organization’s history.

Durham and Mary Lou Retton were the first star American pupils of Romanian-American gymnastics coaches, Bela and Martha Karolyi. Durham won the McDonald’s International Invitational in Los Angeles in 1983, however her injuries slowed her down, forcing the gymnast to miss the 1983 world championships.

“I think between her and Mary Lou Retton, they felt they introduced more of a power gymnastics,” Tom Drahozal, Durham’s husband, said, according to the AP. “The door was open by Dianne.” 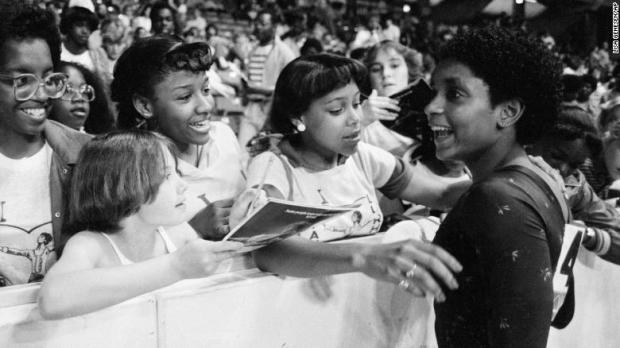 Black women and girls would go on to break barriers after Durham. Dominique Dawes became the first Black gymnast to win an individual event at the Olympics in 1996, and Gabby Douglas became the first Black gymnast to become the Olympics’ all-around champion in 2012. Simone Biles has also been praised for being the best gymnast the sports world has ever seen since her debut in 2016.

Durham never reflected on the significance of being the first Black national champion.

“People said, you’re the first Black — I’m using Black because African American wasn’t a term in my era — national champion. Do you know that didn’t go through my head one time?” Durham told ESPN last year. “Not one time. Do you know how many people had to tell me that? I could not understand why that was such a humongous deal.”

It took time for the pioneering gymnast to understand the gravity of her accomplishments, especially since Durham was shunned from the spotlight.

“In my own life and gymnastics career I encountered discrimination and prejudice,” Durham wrote on Facebook in June, just days after George Floyd was killed by Minneapolis police. “It didn’t stop me from reaching all of my goals, but it did play a role in preventing me from reaching some of my biggest goals.”

“Unfortunately, she didn’t get into the Olympics because of politics,” Drahozal said. “I think she’d come to terms with it…But she had told me, ‘It was what it was, I can’t go back and redo it again.'”

Durham continued to work in gymnastics throughout her life, eventually running her own gym, Skyline Gymnastics, in Chicago, USA Gymnastics reported.

In 2017, Durham was inducted into the Hall of Fame for Region 5 gymnastics, the division of USA Gymnastics that covers parts of the Midwest.

Durham and her husband lived in Chicago until her death.