The rapper had been on life support since his overdose last week.

DMX died at the age of 50 on Friday, TMZ has confirmed.

Last week, the rapper — born Earl Simmons — suffered a heart attack due to an overdose and was rushed to a hospital in White Plains, New York where he remained on life support until his death. 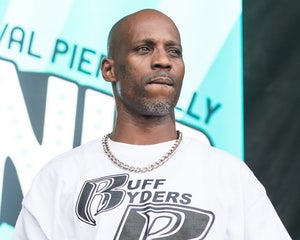 By Friday morning, DMX was experiencing “significant organ failure,” according to the outlet. It was reported his family and friends were directed to fly in to be with DMX. His mother, Arnett Simmons, fiancée, Desiree Lindstrom, ex wife, Tashera Simmons and children had been staying at his home and friends’ homes near the hospital.

The Mount Vernon, New York native first came on the music scene in the early 1990s. His debut album “It’s Dark and Hell Is Hot” was released in 1998. His best-selling record called “And Then There Was X” from 1999 featured his biggest single “Party Up (Up in Here).”

Acting became a passion as well, with roles in films such as “Romeo Must Die,” “Exit Wounds,” “Cradle 2 the Grave,” and “Last Hour.”

Throughout his career, DMX was arrested on several occasions for charges ranging from drug possession to animal cruelty. In 2019, he was released from prison after serving a one-year sentence for federal tax evasion.

With a history of battling substance abuse, DMX entered rehab for the last time in 2019. “He apologizes for his cancelled shows and thanks his fans for their continued support,” DMX’s team said in a statement at the time. They added that he was “putting family and sobriety first.”

He is survived by fifteen children.

Celebrities took to social media to mourn the legendary entertainer, as fellow rapper T.I. shared, “Rest In Peace to a cultural icon. There are no words that can mend the loss the hip-hop community felt today #RIPDMX.”

Gabrielle Union posted, “No words right now. Nothing but fierce  love, prayers and protection for X’s family, friends and fans. This loss is devastating. #RIPDMX ???????”

Keep reading for more reactions, below.

As a bisexual, I face prejudice from the lesbian community and it hurts