The Australian economy is back to its pre-coronavirus pandemic size after growing another 1.8 per cent through the first three months of 2021 as households maintained their stimulus-aided spending spree.

The Australian Bureau of Statistics on Wednesday reported GDP has now increased by 1.1 per cent over the past 12 months, enough to overcome the 7 per cent contraction that occurred in the June quarter of 2020. 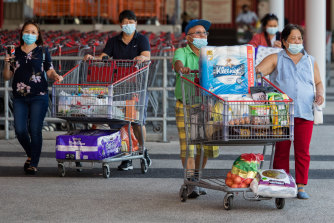 The Australian economy is back to its pre-pandemic size as households maintained their stimulus-aided spending spree.Credit:Jason South

The result was driven by household spending, which accounted for 0.7 percentage points. Households lifted their spending through cafes and restaurants by 14.8 per cent in the quarter although it is still down by more than 10 per cent over the past year.

Households also increased spending on transport services (by 8.8 per cent), recreation and culture (3.3 per cent) and communications (2.2 per cent). Spending on food and cars fell through the quarter while consumers reduced their expenditure on cigarettes by another 0.4 per cent.

Apart from consumer spending, a run-up in inventories by businesses was a major contributor to the strong result, adding 0.7 percentage points to growth. Detracting from growth, net exports sliced 0.6 percentage points from the result while government spending reduced the figure by 0.1 percentage points.

The bureau’s head of national accounts, Michael Smedes, said the economy was back to where it was pre-virus.

“With 1.8 per cent growth in the March quarter 2021, Australian economic activity has recovered to be above pre-pandemic levels and has grown 1.1 per cent through the year,” he said.

Terms of trade are at the highest level since 2011, with strong prices for iron ore and LNG exports behind a 7.4 per cent increase over the latest quarter.

This contributed to a 3.5 per cent increase in nominal GDP. Dwelling investment increased 6.4 per cent over the quarter, partly driven by the federal government’s HomeBuilder grant scheme that was extended for the first few months of 2021.

The household saving ratio edged down to 11.6 per cent from 12.2 per cent, suggesting there is still plenty of scope for consumers to continue supporting the economy.

Income growth slowed, which the bureau said was due to a fall in welfare payments that were wound back through the March quarter.

Victoria’s state final demand grew by 2.3 per cent, Western Australia’s by 3 per cent, Tasmania 1.6 per cent and NSW 1.5 per cent.

NSW’s total final consumption was up 0.4 per cent largely due to rises in household spending as pandemic-related lockdowns eased and more people spent on hotels, restaurants and cafes.

A larger effect was seen in this category in Victoria, at 3.2 per cent, due to more lockdowns easing.

There was, however, a drop in NSW in government consumption of 1.5 per cent due to less spending on employees from universities, local and state government.

A smaller drop in this category of 0.8 per cent was recorded in Victoria with a similar decline in university employee spending but an increase in state and local government.

back, economy, It’s, pre-virus, to
You may also like: