The Coalition’s challenger for Labor’s most marginal Queensland seat has been referred to the Australian Federal Police after the electoral commission raised concerns about possible electoral fraud.

The Australian Electoral Commission confirmed on Sunday morning it had referred Vivian Lobo, the LNP’s candidate for the Labor-held seat of Lilley, to the AFP following its own investigation. 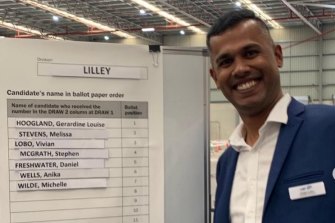 On his nomination form, Lobo allegedly gave the AEC a residential address in Lilley in which he had not been living.

On Friday, the lawn appeared freshly mown and sheets were hanging in the windows, but no furniture or household goods were visible inside.

While it is not illegal to live outside the electorate, providing incorrect information to the AEC may constitute electoral fraud.

“Following Mr Lobo’s candidate nomination for the 2022 federal election, we have reviewed the declarations made on Mr Lobo’s enrolment and nomination forms,” the AEC said in a statement.

“There is concern as to whether the information provided by him regarding his residential address on these forms is false.”

On Friday afternoon, the LNP provided a brief statement on Lobo’s behalf.

“I enrolled in the electorate as I had signed a lease in Everton Park with the intention to move in straight away,” Lobo said in that statement.

“However, due to my campaign commitments and difficulty with getting tradespeople to the home, I was delayed moving in.”

Comment has also been sought from Wells and the Labor campaign.

Lobo was a late addition to the ballot paper after previous LNP candidate Ryan Shaw withdrew in February.