Follow
Home » Lifestyle » ‘End is in sight’, but La Nina could finish the year with a ‘bang’

‘End is in sight’, but La Nina could finish the year with a ‘bang’

The La Nina weather system that has broken rainfall records across much of Victoria and NSW is forecast to ease in December, with normal summer conditions to return early next year.

The latest update from the Bureau of Meteorology released on Tuesday said while a La Nina weather system remained in place, the majority of its models indicated a short-lived event that would weaken by December. 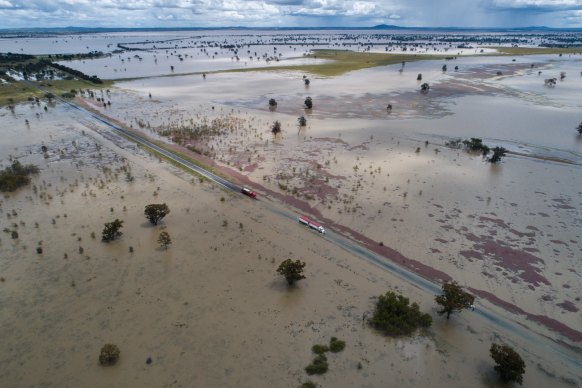 NSW has experienced another major flooding event this week.Credit:Nick Moir

The return to a neutral El Nino-Southern Oscillation (ENSO) phase means easterly trade winds will draw up cooler water in the east while warm waters build up to Australia’s north. The winds loop around, across the ocean surface and then up into higher levels of the atmosphere and then back around again in a cycle.

Weatherzone meteorologist Felix Levesque said other climate drivers which bring wetter conditions, such as the negative Indian Ocean Dipole, the positive Southern Annular Mode and the Madden-Julian Oscillation all look likely to ease into the new year.

“It feels like the end is in sight, but with that being said, I wouldn’t be too surprised if the year ends with a bang,” he said. “El Nino is more likely to be the next climate driver after three-back-to-back La Ninas, so we will return to a neutral phase for a bit and then El Nino could return over the next few seasons.”

But Levesque added that forecasts had a wide range of possibilities and the climate drivers causing the wet weather could linger longer than current models indicated.

NSW SES spokesperson Greg Nash said the agency welcomed any news of a return to normal summer conditions but added flooding risk remains high. For example, in Cooma 100mm of rain was previously needed for flooding to hit moderate levels. On Tuesday, all it took was 30mm of rain for the town to reach that level.

Flood-affected communities are now turning their effort toward the mammoth clean-up effort following days of rain, with more than 130 NSW SES warnings remaining in place throughout the state.

“The flood risk and the threat remains across NSW today and will do so for some days to come,” NSW Emergency Services Minister Steph Cooke said in a flood update on Tuesday.

SES Commissioner Carlene York said Bega is one priority, but the agency was also dealing with major flooding in the Western Plains, South West Slopes and the Riverina regions. Major flooding is still occurring at multiple inland towns, including at Wee Waa, Warren, Moree, Gunnedah and Moama.

As rivers across the mid and northern parts of the state begin to recede, weather experts have shifted their concerns towards a “hybrid cyclone” that looks set to form off the east coast of Victoria on Tuesday. The system will bring heavy rain to eastern Victoria, southeast NSW and eastern Tasmania until at least Friday.

The hybrid cyclone is anticipated due to the collision of two low pressure-systems – one near the NSW-Victoria border and one off the north coast of NSW.

Climate change continues to influence the Australian and global climate. Australia’s climate has warmed by about 1.47 degrees in the period between 1910 and 2020.