A Harry Kane extra time goal last night secured the Three Lions' spot in the Euro 2020 final but scoring a football shirt to follow the team is proving a challenge for fans. 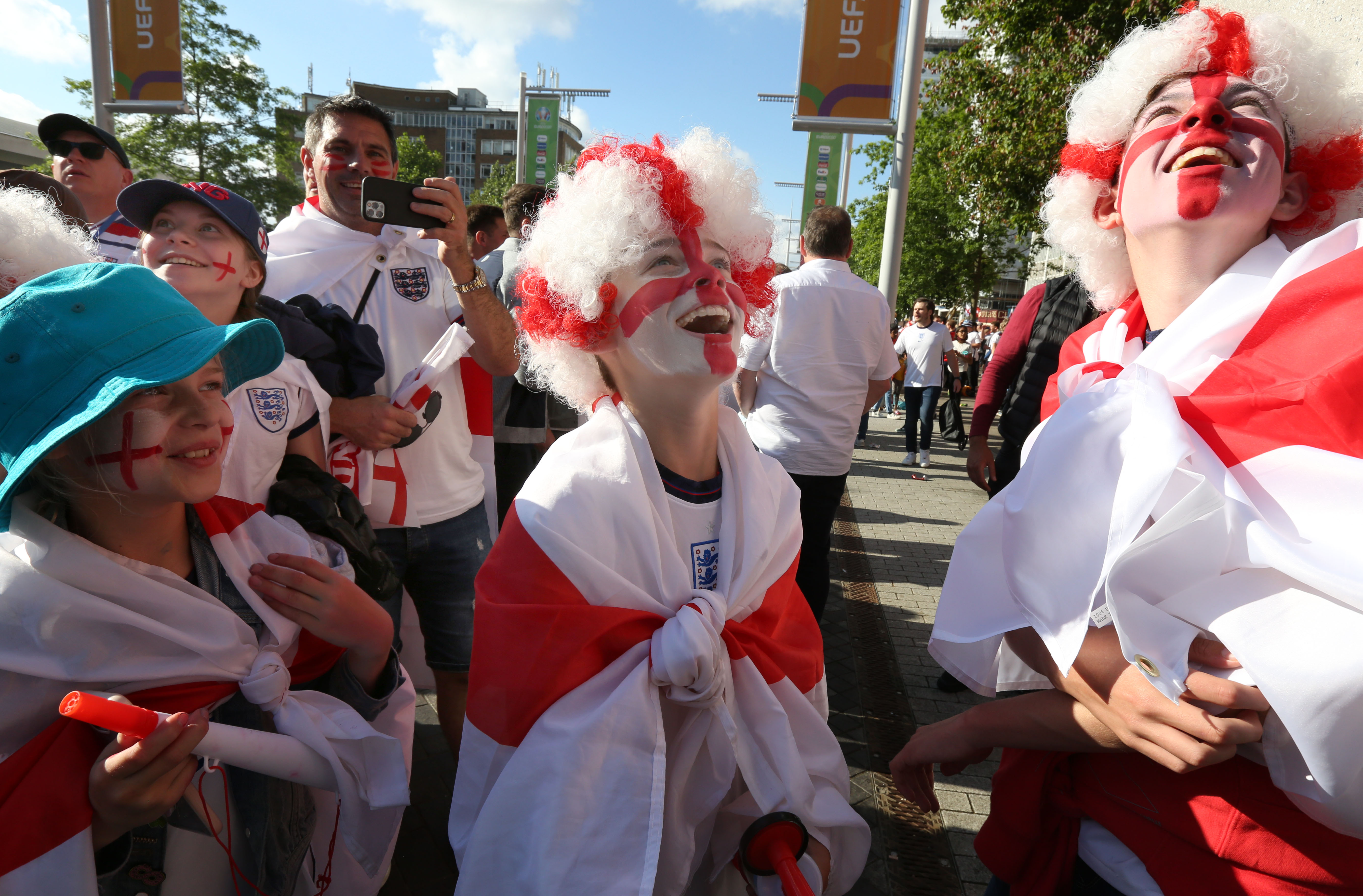 England will face Italy in the Euro 2020 final on Sunday.

Tickets for the final are sold out and already being flogged for thousands by touts.

Desperate fans were already battling to find shirts ahead of the semi-final and now face a struggle if they want an official kit to watch the final at home or in the pub this weekend,

The official England kit is priced at around £70 for adults and from £55 for kids.

But high street shops such as JD Sports and Sports Direct have a shortage of the official white home shirt that the team will wear on Sunday both online and in stores.

Instead, those desperate for a kit to support England face paying hundreds of pounds online.

The Sun has found current England shirts are selling on eBay for between £300 and £500. 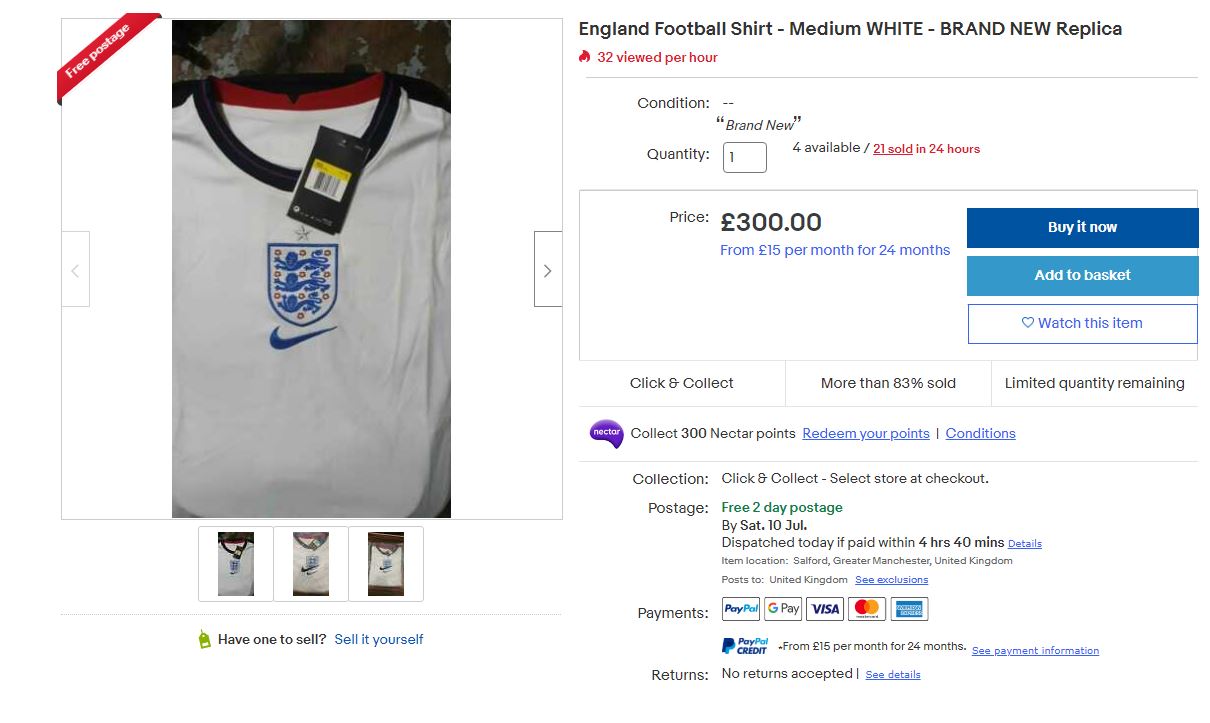 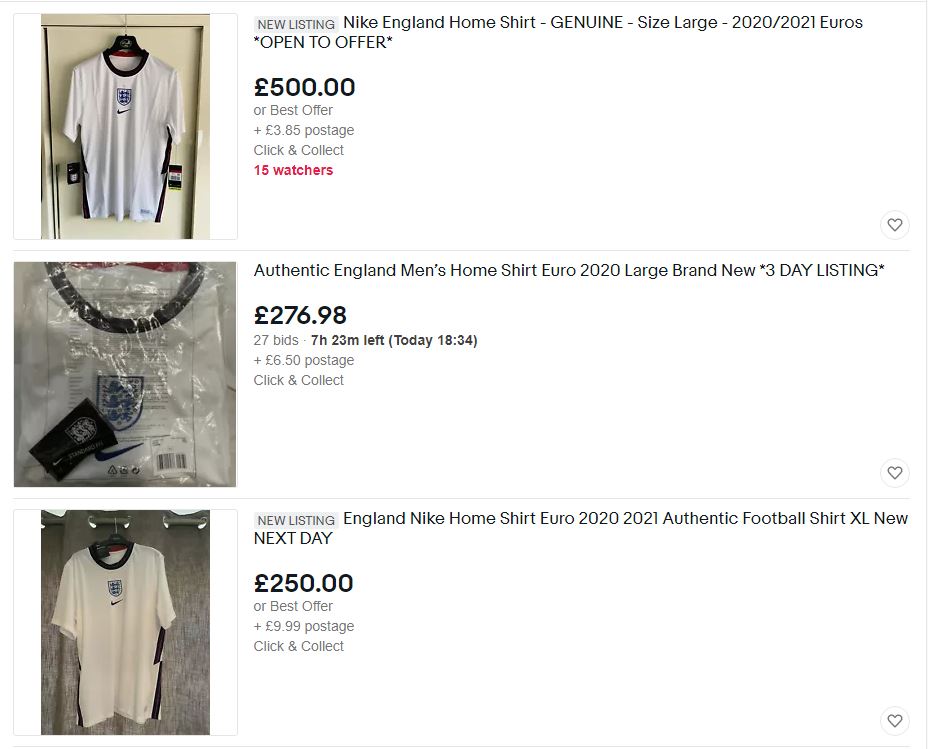 JD Sports and Sports Direct stores on Oxford Street didn't have the England home shirt in stock when The Sun visited last week.

JD Sports was only showing a junior England shirt online this morning with Kane and the number nine printed on the back.

This is only currently available in a small for £70.00 and you would need to pay £4.99 for two-day express delivery to guarantee that you will receive it by Sunday.

You can also arrange a click and collect with a nearby JD Sports store but this takes three to five days.

Sports Direct is selling a junior shirt for £55 with no names or numbers but only shows a small or medium online.

Next day delivery costs £7.99 or £4.99 to get sent to a store but there is no guarantee it will arrive on time. 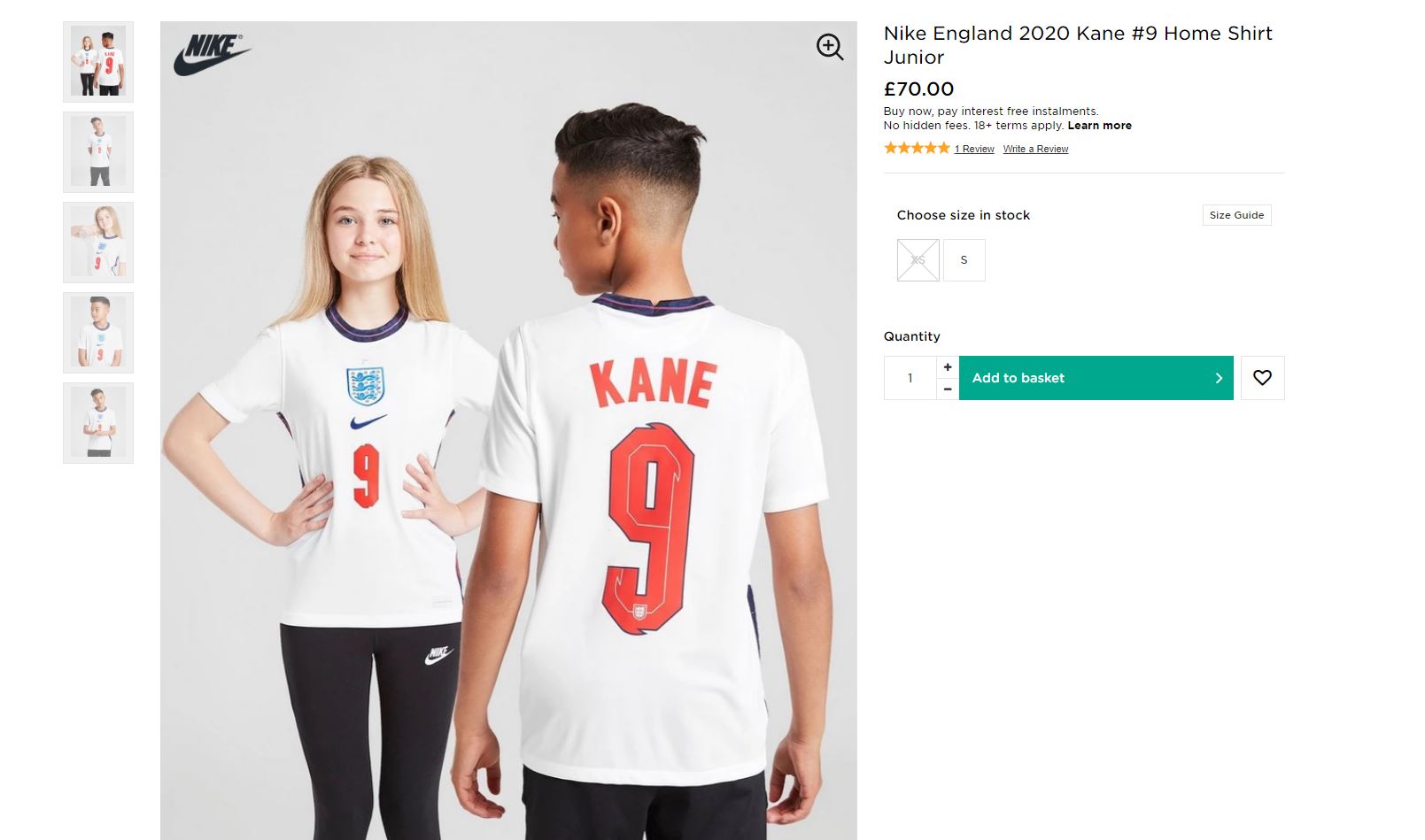 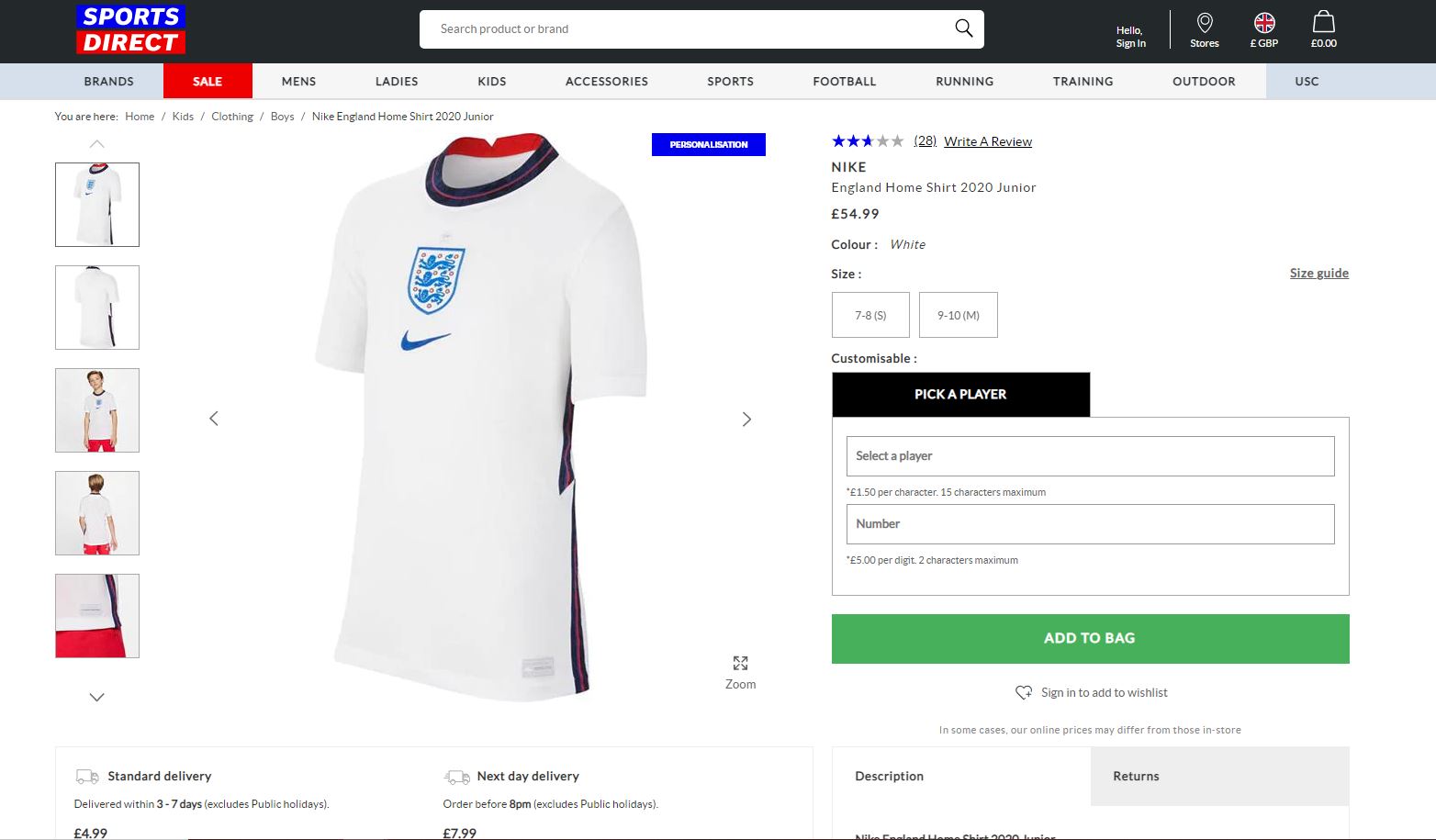 The official online England Store also has a shortage.

It currently only shows the white home shirt with printed names and numbers.

A Kane shirt with the number nine on the back costs £114.95 and there was only an XL left this morning.

The Sun has asked these stores if more stock is coming and will update when we hear back. 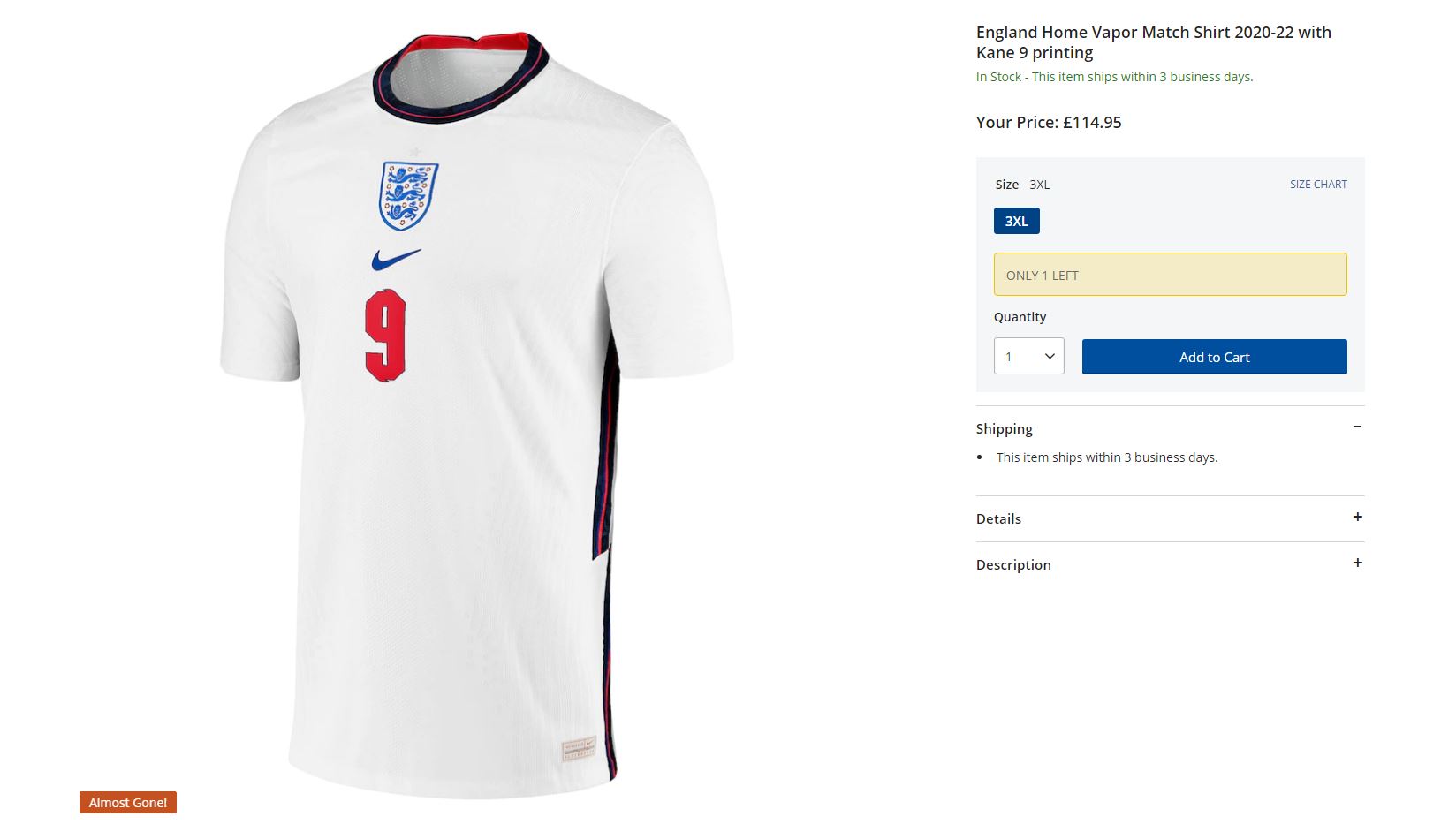 How to bag an England football shirt by Sunday's final

There are plenty of t-shirts displaying the England badge or phrases such as "It's coming home" or "Southgate you're the one."

But shops have been struggling to keep up with demand for England football shirts so stock of kits is extremely low and many shops across the country are sold out.

There are official England kits selling on eBay for £300 and some are going for as low as £20 but there is no guarantee that any of these will arrive on time and you may need to pay extra for delivery.

There are England shirts from previous tournaments such as Euro 96 and the 1990 World Cup selling on eBay and elsewhere online for around £30 – but there is a risk that they won't arrive before the final.

Retro football shirts website Score Draw is selling a red England shirt based on the one worn by the World Cup winning team in 1996.

It costs £35 but you would need to pay £7.95 for express delivery to get the shirt on time for Sunday.

It may be worth trying smaller sports shops near you.

The Sun has seen Facebook Marketplace listings of England home shirts for around £25 but this would depend where you live and it is unclear if these are official replicas. 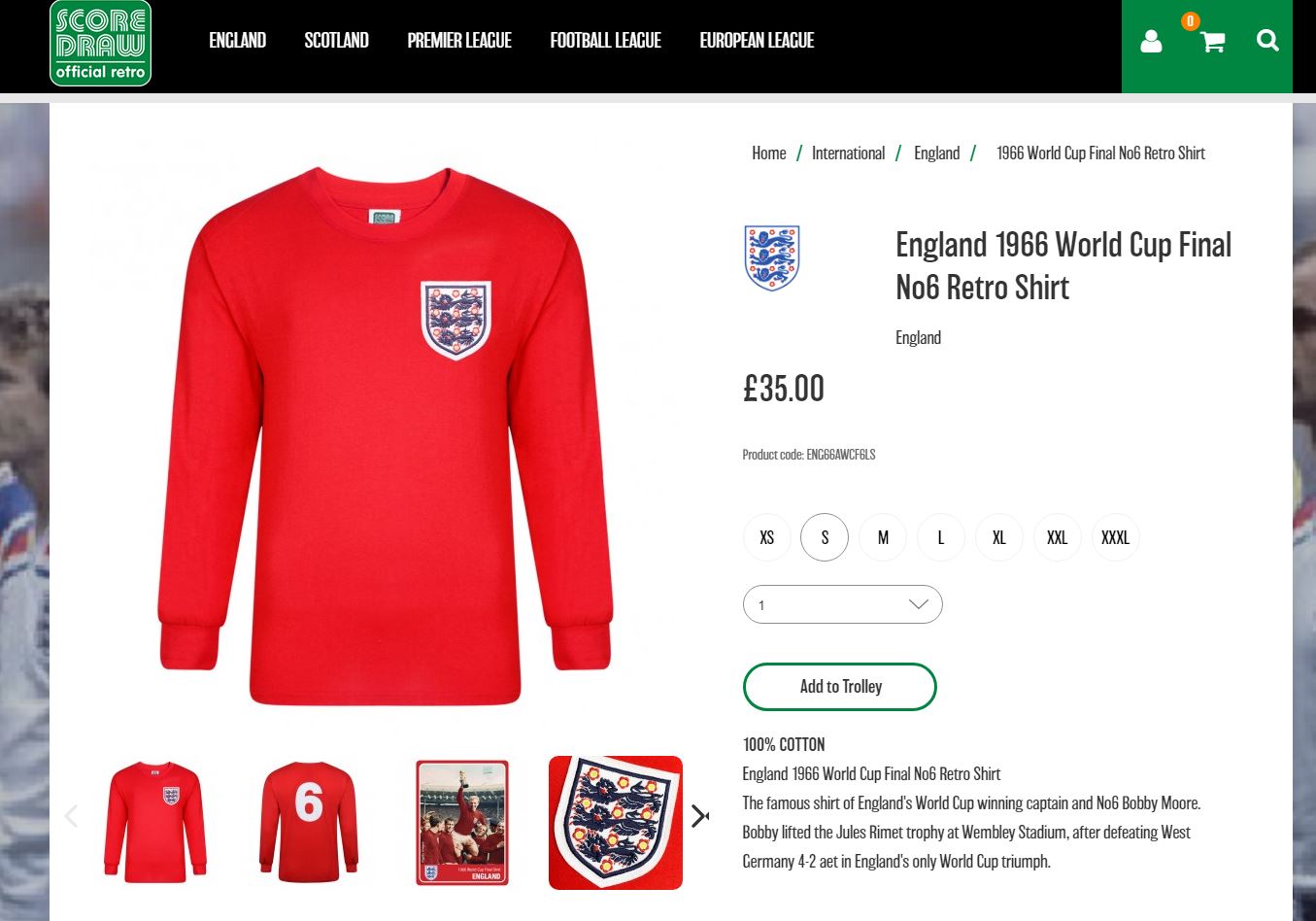 Martyn James, of consumer rights website Resolver, said: "If you're desperate to get you hands on England kit, then beware – wherever there's a demand, there's a fraudster waiting to tackle you.

"Remember that an advert of a genuine footy kit doesn't mean that's what you're going to get in the post. Anyone can knock up an online shop and cut and paste a picture."

Mr James said he has already seen lots of complaints about people who've ended up with misspelled shirts and shoddy quality kit.

He added: "Watch out for shops based abroad – especially those advertising on social media.

"Before you click to buy check out where the item is coming from and how long it will take to get here – it can take a month for items to arrive from the States.

"Never transfer money – always pay by a plastic card or electronic service like PayPal who can help you get your cash back if something goes wrong."

Pubs in England are already fully booked for the Euro 2020 final.

Here are the best deals supermarkets and chains are offering to celebrate the Euros if you are watching at home instead.

Do you have a retro England shirt in your wardrobe? It could attract hundreds of pounds on eBay.