Parents who thought their daughter, 8, had tummy aches from eating too much during lockdown left devastated as she dies from rare cancer just three months after being diagnosed

A family have been left devastated after their ‘bubbly’ eight-year-old girl died just three months after being diagnosed with cancer.

Rhiannon Davies, 25, and Danny Hill, 27, from Darlington, County Durham, have shared the heartache of their daughter Amelia Davies, tragically passing away on  January 25.

Rhiannon explained how Amelia began suffering from stomach pains and constipation in August 2020 and after various tests was diagnosed with neuroblastoma on October 30, 2020.

Although treatment was going well, Amelia sadly died following her battle with the rare type of cancer that mostly affects babies and young children. 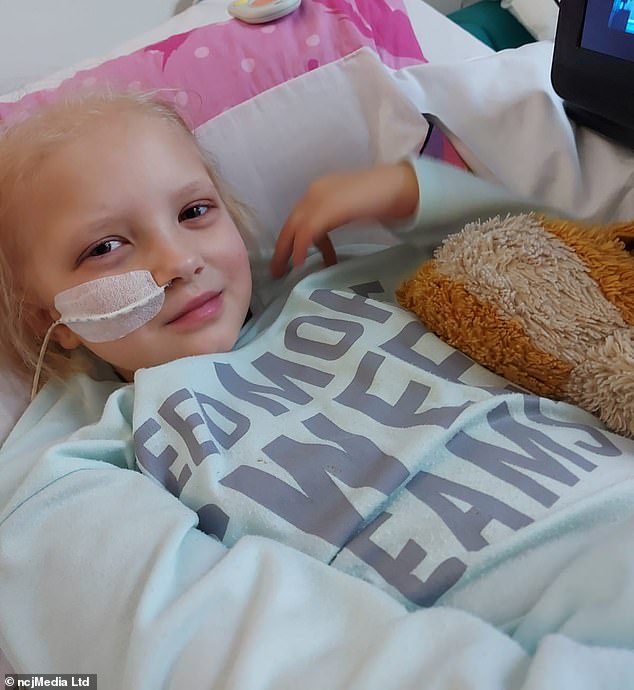 Despite their heartache, the family is determined to raise awareness of the condition in memory of their ‘cheeky girl’.

Rhiannon said: ‘What scares me the most is she didn’t have any swelling so her only symptoms were constipation and stomach aches.

‘Stomach aches are something that kids complain about all the time so we had no idea it was going to be that serious.

‘She was eating so much throughout lockdown, we thought she might have been eating too much or had developed an intolerance to something.

‘I rang the doctors because she couldn’t finish her sandwich and was in quite a bit of pain.’

After calling the GP, Amelia was booked in for an ultrasound at Darlington Memorial Hospital where they were called back the following day for more testing.

Rhiannon continued: ‘We were told we needed to come back for further investigation, they couldn’t tell me much over the phone.

‘They said they had found something attached to her left kidney so we didn’t know the full extent of it.’ 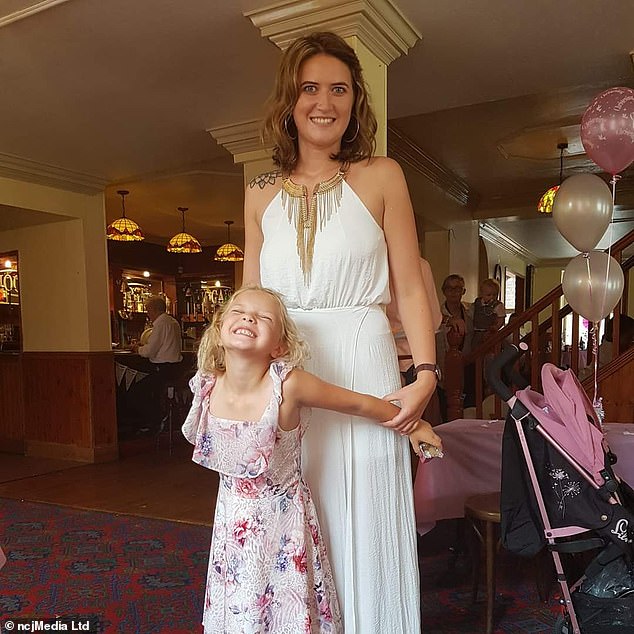 Rhiannon took Amelia to the doctors after she began to experience constipation and stomach aches. Pictured: Rhiannon with Amelia

Doctors found a tumour on Amelia’s left kidney and she was immediately transferred to the Royal Victoria Infirmary in Newcastle.

There she had more tests and after doctors found some cancerous neuroblastoma cells she was booked in to have the tumour removed on November 16.

The consultant then decided to carry out a bone marrow test to make sure the cells hadn’t spread elsewhere.

But, tragically the cells had spread to the bone marrow and the family were given the devastating news that Amelia had neuroblastoma.

Amelia’s treatment started on November 4 and she was having chemotherapy every 10 days for eight sessions which her mum said took its toll on her daughter.

The brave little girl was fitted with a feeding tube as her weight plummeted from 31.9kg to 28.5kg and suffered from horrid side effects from the treatment.

Rhiannon said: ‘Amelia struggled to eat because the tumour was pressing on her stomach. She wanted to eat but she never knew what she wanted. 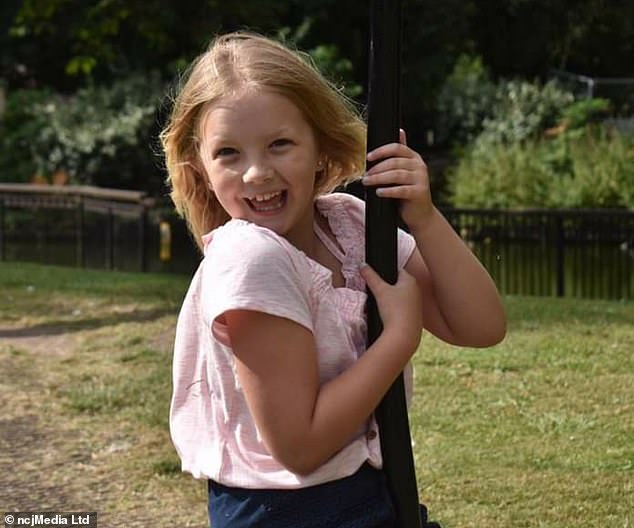 Having being diagnosed with neuroblastoma, Amelia (pictured) began treatments that made her struggle to walk and lose her hair 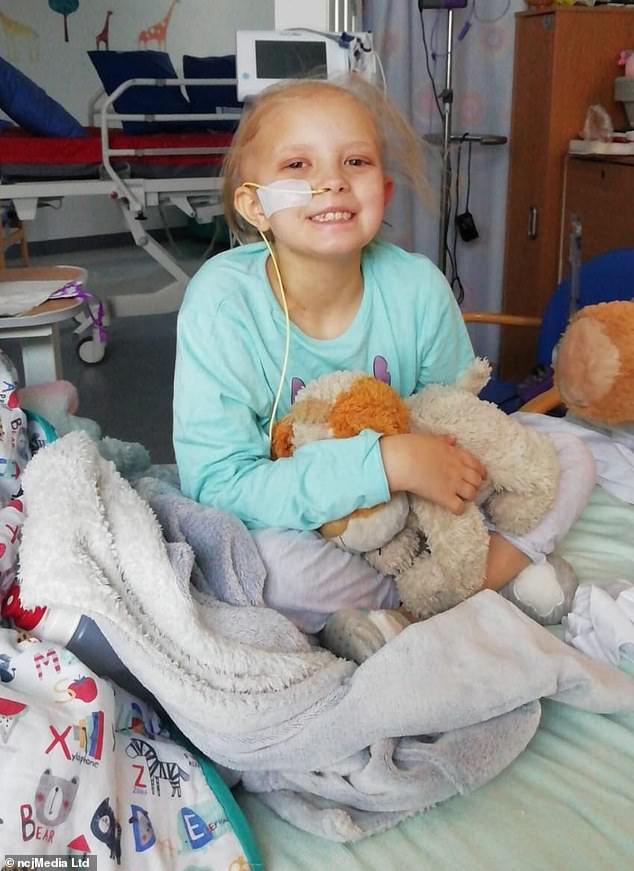 The family were preparing for Amelia (pictured) to be discharged from hospital, when her condition suddenly worsened and she tragically passed away on January 25

‘She struggled to walk, her legs were shaking and she was getting skinnier and skinnier. We were sometimes in hospital for long periods of time and she spent most of her time in bed.

‘Trying to get her to go out for a walk around the ward was hard, but we managed to do that a few times. When we got home it was a struggle for her to get up and down the stairs so we had to carry her.

‘She was really scared and then was she angry. The treatment was really hard and she didn’t want the doctors or nurses anywhere near her but after that, she wasn’t too bad.

‘After the second treatment, her hair fell out and that really freaked her out because it was coming out in clumps.

‘She would have good days and bad days but her personality was always there. She was still her happy self.’

Amelia even had treatment on Christmas Eve and spent most of Christmas Day in bed but the family were given the good news that the treatment was working as the tumour had shrunk.

Rhiannon said: ‘January 13 was Amelia’s last treatment and we had an MRI scan which showed that the bone marrow was clear and the tumour had shrunk.

‘They said they had found another cell on her left hip bone that we weren’t aware of before but the tumour had shrunk and it was all going in the right direction.’

The family were preparing for Amelia to be discharged until her condition suddenly worsened during a potassium infusion.

Neuroblastoma is a rare cancer that affects children and usually starts in the abdomen.

Around 100 children, who are typically under five, are diagnosed every year in the UK.

Neuroblastoma’s cause is unclear. There may be a family-history link.

Treatment depends on how advanced the cancer is and the risk it will return after therapy.

Rhiannon said: ‘She was fine and then suddenly she started screaming out in pain and twisting in her bed. We didn’t know what had happened because she was fine a couple of minutes beforehand.

‘We tried to calm her and then she started feeling like she couldn’t breathe and couldn’t lift her body. They couldn’t work out what was going on inside her body.

‘She was given an adrenaline shot and they were discussing what they should do next. Amelia was fine, she was talking but she said she felt really funny.

‘Something just happened and she literally just went.

‘She was going to get discharged on Monday. We were so happy to get over the first set, we were in and out of hospital constantly but then it all changed.’

Despite best efforts from the medical staff, Amelia passed away on January 25 with Rhiannon expressing her gratitude to the ‘fantastic staff’ at the RVI who cared for Amelia.

Since Amelia’s tragic death her family have become determined to raise awareness around neuroblastoma.

Rhiannon said: ‘Stomach pain and swelling are symptoms although Amelia never suffered from any kind of swelling.

‘We just want to raise more awareness around neuroblastoma and help other families.’

She said: ‘Amelia was always running around, she was sassy, happy and cheeky. She loved going to school to see her friends and she loved spending lots of time with them.

‘She was so bubbly she loved swimming and cooking. She was just amazing and we all miss her so much.’

In a bid to raise money and awareness, local resident Jeanine Bekker and her family are taking on a huge challenge which will see them walk or run four miles every four hours for 48 hours from 4am on March 6 until 4am on March 8. 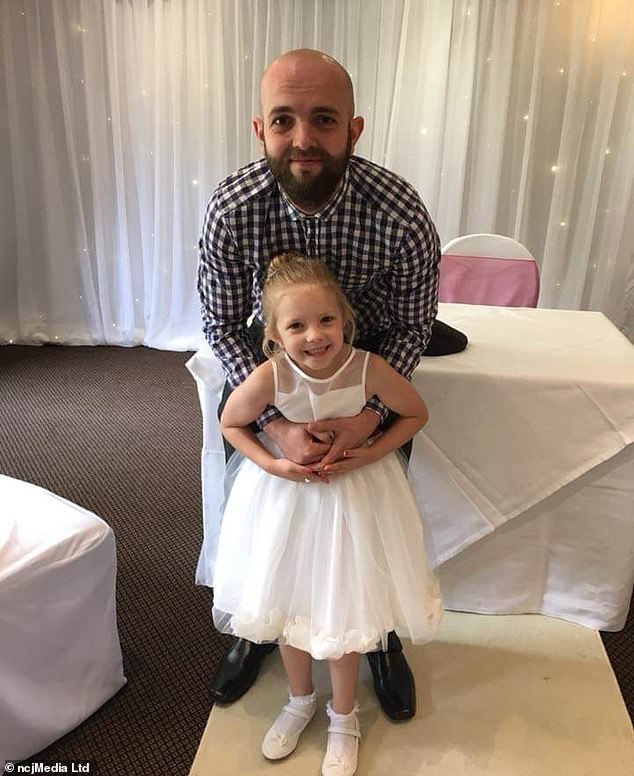 Rhiannon said Amelia had been a ‘sassy, happy, and cheeky’ child who loved going to school and spending time with her friends. Pictured: Amelia with her father Danny Hill

They’ve already smashed their £2,000 target but are hoping to raise as much money as possible.

Jeanine said: ‘Our nine-year-old went to school with Amelia and shared a lunch table and class with her.

‘I can’t imagine what the family is going through right now so we just want to do whatever we can to help.’

They hope to raise money for a ‘Buddy Bench’ at the school in Amelia’s name so if a child feels lonely, they can go to the bench as a sign that they need someone to play with.

If you would like to donate, you can do so by clicking here